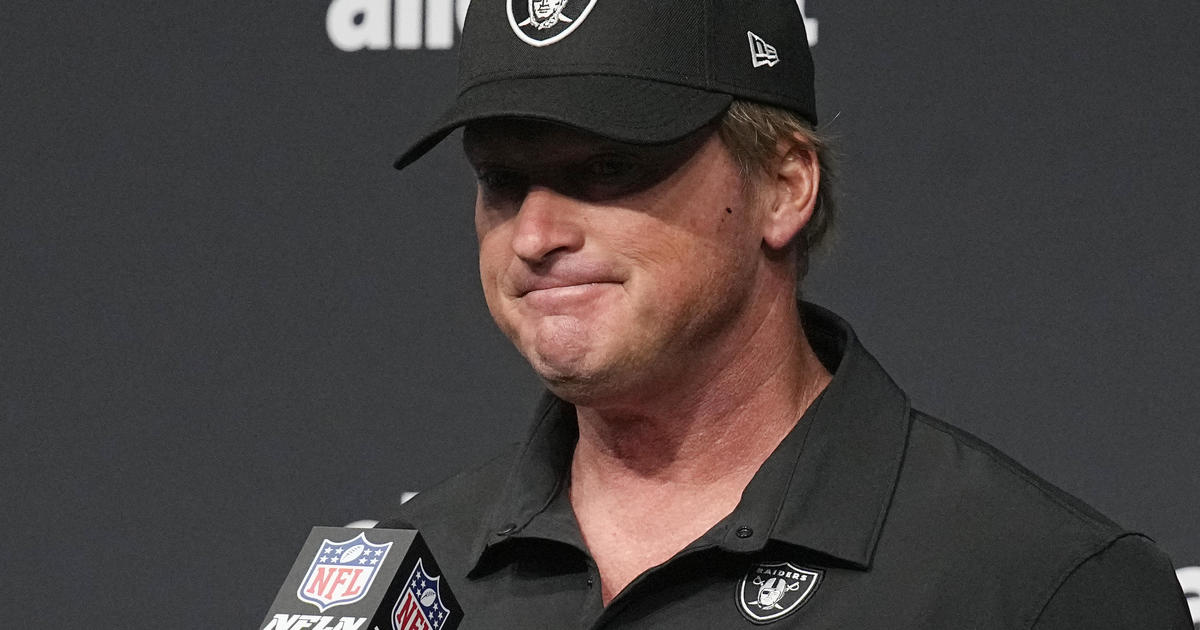 NFL coach Jon Gruden’s sudden departure from the Las Vegas Raiders after an email scandal likely means he will be out tens of millions of dollars in pay that was originally promised when he signed a 10-year, $100 million contract in 2018, sports experts said.

Gruden resigned from the team Monday after emails surfaced from 2011 where he used racist comments to describe a players’ union executive. The New York Times reported that Gruden, 58, used homophobic and misogynistic terms years ago in another batch of emails from 2011 to 2018. The NFL shared copies of Gruden’s emails internally during an on-going workplace misconduct investigation, the Times reported.

Because Gruden resigned, as opposed to being fired, he will probably be paid an unknown percentage of his remaining salary, said Derek Potts, a sports-contract lawyer in Houston.

Gruden is a former football analyst for ESPN who led the Tampa Bay Buccaneers to a Super Bowl victory in 2003. In NFL circles, Gruden is considered one of the best coaches ever to step on the field. His Raiders contract was the largest NFL coaching deal in league history. Gruden was so well-regarded that he presumably had a contract where he could get paid something even if he left the Raiders early, Potts said.

Gruden has completed three seasons with the Raiders and was entering his fourth year on Thursday, which meant he had at least $60 million left to be paid, Sporting News reported.

“I’ll be shocked if he turned away from 100 percent of his remaining compensation,” Potts told CBS MoneyWatch, adding that he’s unsure what percentage Gruden would likely be able to keep.

The public likely will never see the provision from Gruden’s contract that governs his exit terms, Potts said, so there’s no way of knowing exactly how much Gruden pockets on his way out the stadium doors. The Raiders have not responded to CBS MoneyWatch’s requests for comment about Gruden’s pay.

Gruden’s exit payout might be a mystery, but what’s clear is that the bad publicity from the emails could also engulf top executives at well-known companies across the nation.

Gruden sent the offensive emails to Hooters co-founder Ed Droste, Outback Bowl President Jim McVay, PDQ Restaurants founder Nick Reader and former Washington Football Team executive Bruce Allen and others, the Times reported. In one email, Gruden made disparaging remarks about DeMaurice Smith, who is Black and is head of the NFL players union. Gruden wrote that Smith “has lips the size of michellin tires,” according to the Wall Street Journal. Gruden later apologized to Smith earlier this month.

“As they go through these emails, they should look at who he wrote these to and what was their reaction,” Rhoden said. “A lot of these people are executives who probably hold high positions in different industries. They’re the ones who determine who gets hired [and] who gets promoted.”

Union leader Smith also hinted at what should be done to people who received Gruden’s emails. In a tweet, Smith said he appreciated Gruden’s apology.

“But make no mistake, the news is not about what is said in our private conversation, but what else is said by people who never thought they would be exposed and how they are going to be held to account,” Smith tweeted.

Hooters, the Outback Bowl, PDQ and Allen did not respond to requests for comment Tuesday by CBS MoneyWatch.

Gruden’s emails come at a particularly prickly moment for the NFL, as the league tries to do its part to address racial inequities on and off the field. The NFL last year committed $250 million over 10 years to combat systemic racism with grants to organizations that fight for social justice. League officials also admitted last year that they did not do enough to encourage players to speak out against racial injustice.

The NFL and its teams have been accused of racist practices in the past, particularly in the way it handled concussion protocol payments to former players and the ouster of former quarterback Colin Kaepernick after he kneeled during the national anthem in 2016. The Washington, D.C., team removed “Redskins” from its name after years of using the moniker that is a racial slur to indigenous people.

The NFL’s 32 team owners must lead the way in clearing the cloud of racism hanging over the league because they have the true power and influence, NFL Today host James Brown told CBSN.

“The owners, that’s where the change needs to start,” Brown said. “They’ve got to be people of character and integrity and look in and see what is really a champion —not just the Ws and Ls on the football field, but in terms of the game of life.”

The Gruden emails combined with what happened to Kaepernick suggests the NFL has a bigger problem than just racist coaches, Rhoden told CBS Mornings.

“Don’t think for a minute Gruden is the only one who thinks like that,” he said.

Khristopher J. Brooks is a reporter and video editor for CBS MoneyWatch covering business, consumer and financial stories that range from economic inequality and housing issues to bankruptcies and the business of sports. Brooks has covered business and economic development for the Rochester Democrat and Chronicle and the Bristol Herald Courier. He also covered higher education for the Omaha World-Herald, the Florida Times-Union and The Ledger in Lakeland, Florida.