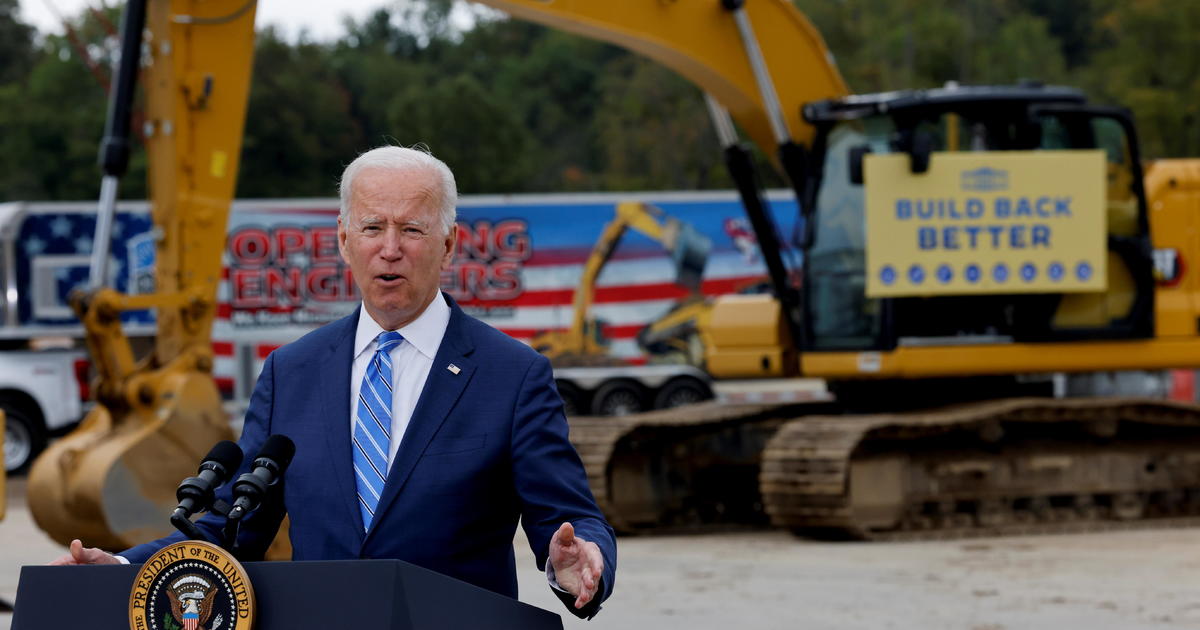 Washington — President Biden is in Michigan on Tuesday pitching his domestic policy agenda as the White House attempts to bridge the deep divisions in the Democratic Party over the size and scope of the president’s sweeping social spending package.

Mr. Biden visited a training facility for the International Union of Operating Engineers before delivering remarks to drum up support for the two plans that are cornerstones of his agenda: the $1 trillion bipartisan infrastructure bill and the much larger package to expand the nation’s social safety net and combat climate change. In Michigan, the president specifically touted the contributions of union workers, and emphasized the need to compete against China.

“These bills are not about left versus right, or moderate versus progressive, or anything that pits Americans against one another,” the president said in Michigan. “These bills are about competitiveness versus complacency. They’re about opportunity versus decay. They’re about leading the world, or continuing to let the world pass us by, which is literally happening.”

Both efforts are in legislative limbo as Democrats try to hash out the details of the more wide-ranging proposal, which encompasses Democrats’ plans for universal pre-K, free community college, child and elder care and to expand Medicare. Just 12 years of education isn’t enough in the 21st Century, the president said Tuesday.

Democratic leaders are attempting to navigate internal divisions between progressive lawmakers and two moderate senators, who want to see the package’s $3.5 trillion price tag trimmed. Further complicating the path to success for the two bills are Democrats’ fragile majorities in the House and Senate, as opposition to either measure from a small bloc of lawmakers can derail their passage. At the moment, the president is not scheduled to visit Arizona or West Virginia, the two states with senators vocally opposed to a large package.

Mr. Biden and top White House officials have convened meetings this week to negotiate the terms of the social spending package and which programs they want to include in the plan. The president on Monday met virtually with a dozen progressive House members and set a price range of $1.9 trillion and $2.2 trillion for the proposal. He also met with more moderate members on Tuesday.

“We’re gonna’ restore faith, pride and dignity in the future of this country,” the president said Tuesday in closing. “And we’re gonna’ pass both of these bills and start building this economy to beat the competition and deliver for working families.”

The fight over the president’s legislative agenda comes during an even more urgent battle over the debt limit, as the U.S. expects to reach its debt ceiling later this month. The president on Monday urged Republicans to “just get out of the way” and let Democrats raise the debt limit on their own, without filibustering.