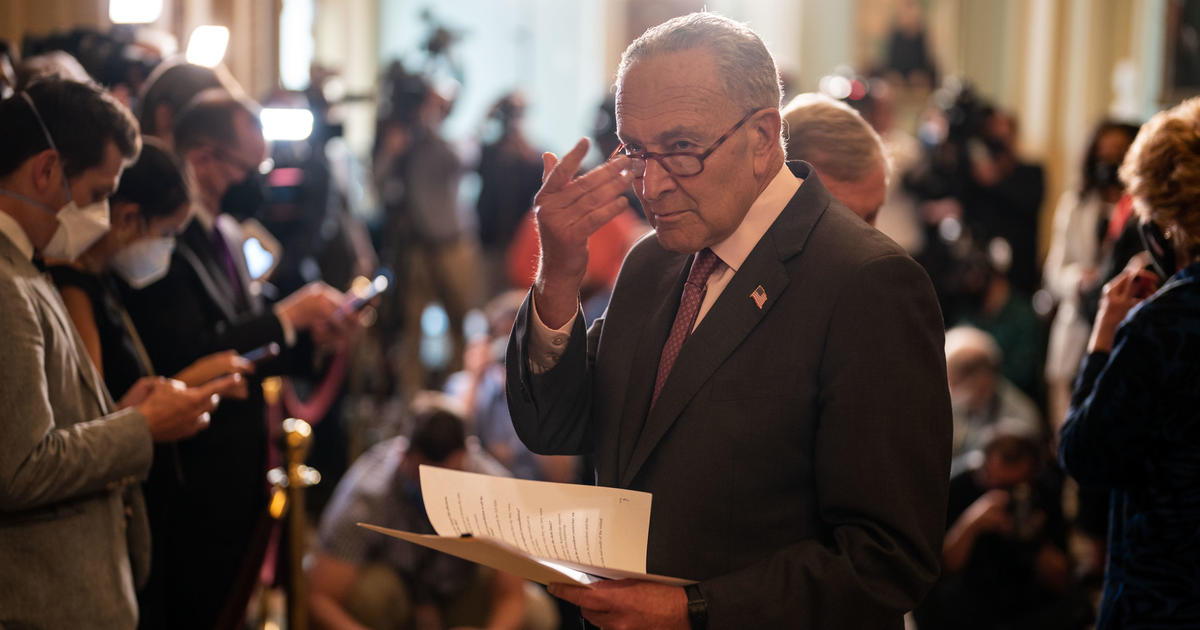 Washington — Senate Majority Leader Chuck Schumer told his Senate colleagues on Monday that they must pass legislation addressing the debt ceiling by the end of the week, aiming to stave off a debt crisis as the deadline to skirt a first-ever default moves closer.

Schumer, a Democrat from New York, warned his fellow Senate Democrats in a “Dear Colleague” letter that Congress “does not have the luxury” of waiting until October 18 to suspend the debt limit, which is the estimated date at which the Treasury Department would exhaust measures allowing the federal government to pay its bills.

Schumer said the consequences of approaching that date could have “disastrous” consequences for the global economy and American families, and hinder the economic recovery from the COVID-19 pandemic.

“Let me be clear about the task ahead of us: we must get a bill to the president’s desk dealing with the debt limit by the end of the week. Period,” the majority leader wrote.

Schumer also chided Senate Republicans for opposing any measure that suspends the debt limit, arguing they “completely abdicated their responsibility to the nation” by refusing to work with Democrats to address the debt limit.

Senate Minority Leader Mitch McConnell has repeatedly said he and his fellow Republicans will not help Democrats with suspending the debt limit, and any legislation doing so must be passed with Democratic support alone.

“This episode is a stark reminder how absurd and partisan Republicans have made the process for raising the debt limit,” Schumer told his fellow Democrats.

The New York senator said Democrats will discuss the debt limit Tuesday and warned the Senate will be forced to stay in session over the weekend and through its upcoming week-long recess, which is set to begin October 11, absent action resolving the debt issue before then.

While Schumer has set an end-of-week deadline for Congress to address the debt limit, McConnell sent a separate letter to President Biden on Monday pressing him to “engage directly” with congressional Democrats on the issue, arguing Democratic leaders “have no plan of their own to avoid default.”

“My concern for our country is that Leader Schumer and Speaker Pelosi have done nothing,” McConnell told Mr. Biden. “Either the Democratic leaders simply cannot govern or they would rather play chicken with the U.S. economy than accept reality.”

McConnell reiterated that Democrats should use reconciliation, a fast-track process, to suspend the debt limit. Democrats are using reconciliation to move their $3.5 trillion social spending package through Congress without needing Republican support in the Senate, and McConnell said they should pass a standalone debt limit hike through reconciliation swiftly.

“Republicans will not build Speaker Pelosi and Leader Schumer a shortcut around procedural hurdles they can clear on their own so they have a more convenient path to jam us with a partisan taxing and spending spree,” he told the president.