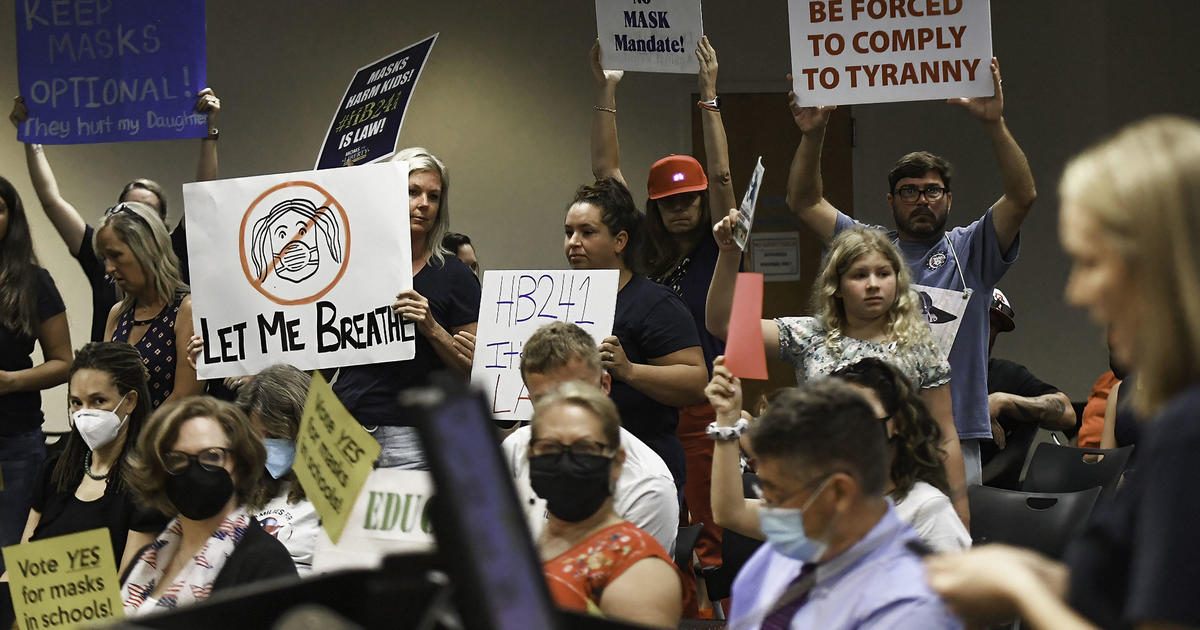 Washington — A national organization representing school board officials from around the country is appealing to President Biden for assistance from federal law enforcement to address a growing number of violent threats and intimidation against public school officials over COVID-19 restrictions and critical race theory.

The leaders of the National School Boards Association, which represents more than 90,000 school board members, told Mr. Biden in a letter Wednesday that U.S. public schools and its leaders “are under an immediate threat” that requires the attention of law enforcement across all levels of government.

The organization said it believes “immediate assistance” is needed to protect students, school board members and teachers “who are susceptible to acts of violence affecting interstate commerce because of threats to their districts, families, and personal safety.”

“It is vital that public discourses be encouraged in a safe and open environment, in which varying viewpoints can be offered in a peaceful manner. Our children are watching the examples of the current debates and we must encourage a positive dialogue even with different opinions,” the officials wrote. “However, with such acute threats and actions that are disruptive to our students’ well-being, to the safety of public school officials and personnel, and to interstate commerce, we urge the federal government’s intervention against individuals or hate groups who are targeting our schools and educators.”

Driving the rise in threats and violent acts against school boards is opposition to policies requiring masks for students and teachers as part of efforts to combat the spread of the highly contagious Delta variant in schools. Children under the age of 12 are not yet eligible for vaccines protecting against COVID-19, and the Centers for Disease Control and Prevention recommends universal indoor masking for all students, teachers and staff regardless of vaccination status.

But in some states, like Florida and Texas, governors have issued orders barring public schools from implementing mask mandates.

While protests against masks in schools have become the latest flashpoint in the pandemic, the National School Board Association said public school officials are also facing “physical threats” over opposition to critical race theory, an academic concept developed by legal scholars to examine the ongoing effects of racism in American policies and institutions.

Critical race theory has become a lightning rod for conservatives, and at least 25 states have sought to restrict the teaching of critical race theory or limit how teachers can discuss racism and sexism, according to an analysis by Education Week.

Across the country, school board meetings have been disrupted by protesters objecting to mask requirements, while others have had to end abruptly because of outbursts over critical race theory.

The National School Boards Association told Mr. Biden in its letter that critical race theory is not taught in public schools and is a subject that is beyond the scope of K-12 curriculum.

“These threats or actual acts of violence against our school districts are impacting the delivery of educational services to students and families, as many districts receive federal funds and subsidies for services to millions of students with disabilities, health screenings and supplemental supports for disadvantaged students, child nutrition, broadband connectivity, educator development, school safety activities, career and technical education, and more,” Garcia and Slaven wrote.

In addition to asking for assistance with monitoring threat levels, they asked for a joint collaboration among federal, state and local law enforcement with public school officials. The association specifically wants to tap into resources from the Departments of Homeland Security and Justice, FBI, Secret Service and National Threat Assessment Center regarding the risk to students, teachers, school board members and educational facilities.

Because threats have been made during school board meetings, through the mail and on social media, Garcia and Slaven are also requesting help from the U.S. Postal Service Inspection Service to intervene against threatening letters and cyberbullying. They also are asking the federal government to “investigate, intercept, and prevent the current threats and acts of violence” through existing laws, executive authority, task forces and other measures.

“As the threats grow and news of extremist hate organizations showing up at school board meetings is being reported, this is a critical time for a proactive approach to deal with this difficult issue,” they told Mr. Biden.

Neither the agencies nor the White House immediately returned requests for comment.