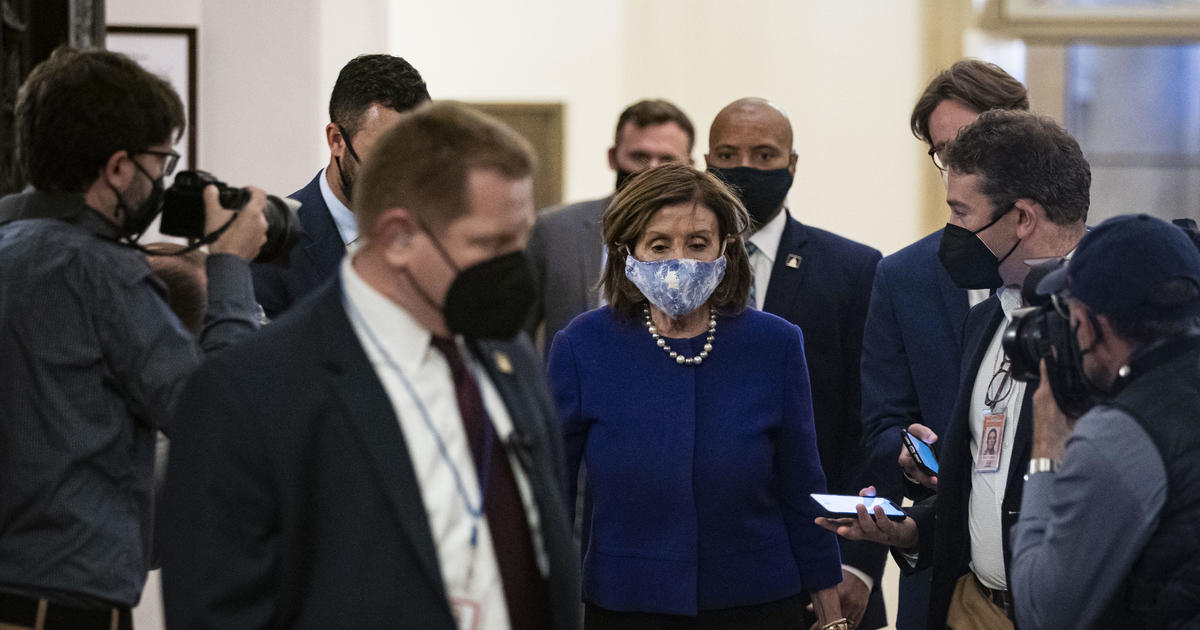 Washington — House Speaker Nancy Pelosi and progressive lawmakers in the House are headed for a face-off with a vote this week on the bipartisan infrastructure bill, as the California Democrat de-linked the narrow measure from the much broader $3.5 trillion social spending package amid party divisions over its price tag.

While Pelosi initially planned to move the two proposals through Congress simultaneously as part of a dual-track strategy endorsed by Democratic leaders and President Biden, the speaker told members of her caucus during a meeting Monday the approach has to change, two sources familiar with the comments told CBS News.

Pelosi said while the House was initially on schedule to take up the bipartisan infrastructure bill after the larger package cleared the Senate, the landscape changed 10 days ago when she learned the $3.5 trillion topline figure had to come down, the sources said.

The shift in strategy — to move ahead with the bipartisan infrastructure bill on its own — tees up a showdown between Democratic leaders and progressive lawmakers, who have threatened to tank the infrastructure plan unless the social spending package is passed first.

In an op-ed published by CNN on Monday, Democratic Representatives Pramila Jayapal of Washington, Ilhan Omar of Minnesota and Katie Porter of California, all members of the Congressional Progressive Caucus, said members of the group “will put our votes on the line” to send the entirety of Mr. Biden’s domestic policy agenda to his desk.

“Speaker Nancy Pelosi has announced her intention that the House vote this week on a transformative economic package and a major investment in infrastructure. Congress now faces a choice: advance the entirety of an agenda that gets American families the help they need, or deliver only a fraction of it,” the trio wrote. “That’s why we, as leaders of the Congressional Progressive Caucus, remain committed to voting for the infrastructure bill only after the Build Back Better Act is passed.”

Jayapal, who chairs the progressive caucus, told reporters following Monday’s meeting that Democrats would fall short of the votes needed to pass the bipartisan bill if either the $3.5 trillion plan failed to pass the Senate first or if a framework on the package couldn’t be agreed to.

“Until that happens, there aren’t the votes for the infrastructure bill,” she said. “So we’re all working very hard to make sure we get that reconciliation piece done, pre-conferenced, agreed to, and then we will happily vote for both bills.”

The House is slated to vote Thursday on the $1 trillion bipartisan infrastructure bill, which aims to provide the biggest investment in the nation’s roads, bridges, railways and ports in decades. While former Presidents Barack Obama and Donald Trump vowed to revitalize the country’s physical infrastructure, neither were successful, and passage of Mr. Biden’s proposal would notch him a crucial victory for his domestic policy agenda.

The Senate approved the infrastructure measure in a bipartisan vote last month, and Pelosi pledged to moderate Democrats the House would take up the legislation by September 27 after they threatened to derail the budget framework that cleared the path for Congress to begin work on the wide-ranging $3.5 trillion package. The sweeping measure encompasses Democrats’ plans for universal pre-K, child and elder care, free community college and to combat climate change.

But the details of that package are still being worked out, and two key moderate Democrats in the Senate, Joe Manchin of West Virginia and Kyrsten Sinema of Arizona, have for weeks expressed their opposition to the $3.5 trillion price tag.

Pelosi told her House Democratic colleagues Monday that Mr. Biden is working on the topline number that would satisfy Manchin and Sinema and noted Congress can’t move forward with the larger plan without that figure, the sources said. She also reiterated the need for Democrats in the House and Senate to agree on the package in order for it to pass both chambers.

The president is set to huddle with Democratic lawmakers throughout the week, he told reporters Monday, and he spoke with Pelosi and Senate Majority Leader Chuck Schumer to discuss the path forward for the infrastructure plan and $3.5 trillion package, according to the White House.