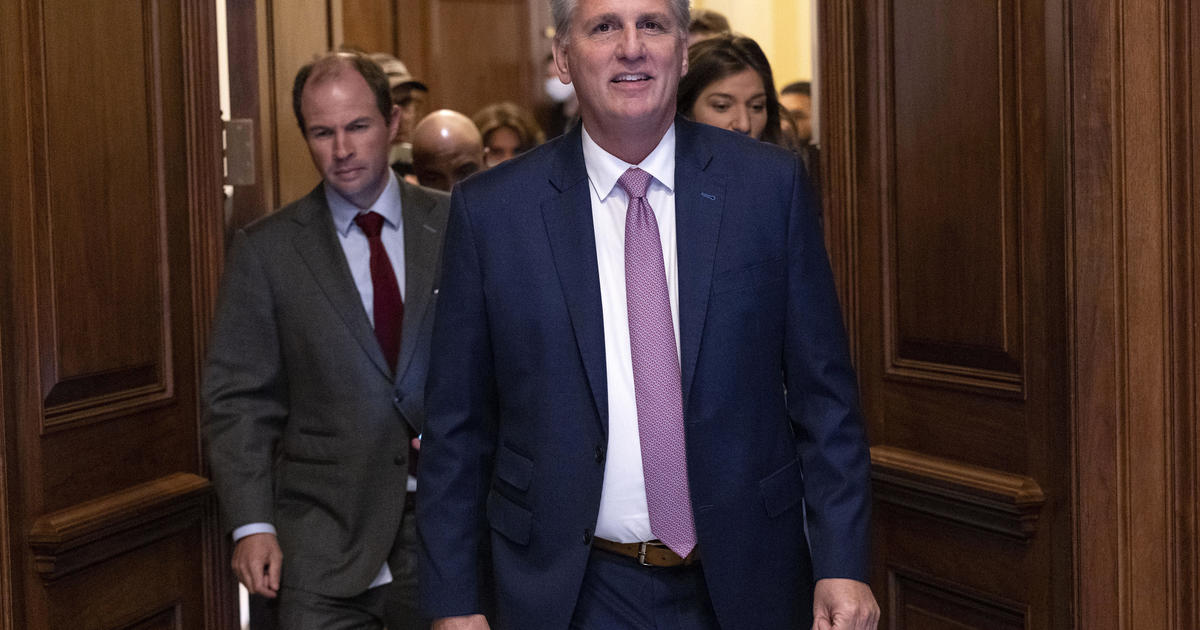 Republicans and Democrats are facing off over the debt limit, firing off competing claims about who is responsible as the United States moves closer toward default for the first time in history. Republicans are pushing Democrats to act alone in addressing the debt ceiling, claiming the need to borrow more money is a result of Democrats’ policies.

But responsibility for the debt is very much bipartisan.

“The current and growing debt is the product of all of the fiscal decisions that we have made as a country. More recent decisions are having a greater impact on that debt like the American Rescue Plan, the COVID response packages that were passed last year or the 2017 Tax Cuts and Jobs Act,” said Shai Akabas of the Bipartisan Policy Center. “Those are all impacting the amount of debt that we take on right now.”

Democrats have included suspending the debt limit in the short-term spending bill, which passed in the House along party lines. The Senate will vote on the bill next week, but it’s already doomed without GOP Senate support. Raising the debt limit is about the U.S. being able to pay the debt obligations already owed, which Democrats say must get bipartisan support, as it has in the past.

“The debt ceiling is redundant. Congress authorizes spending, Congress authorizes tax policy that generates tax revenue, and therefore, Congress is implicitly authorizing borrowing. If there’s a gap between spending and revenue then the only way to fill that gap other than default is to borrow,” said Michael Strain of the American Enterprise Institute.

The debt ceiling most recently was suspended three times under President Trump with bipartisan support, including in 2019 for two years. That suspension expired at the end of July.

“So people wonder why is it different this time, given the fact that over the last 80 years the debt ceiling has been raised 98 times? Well it’s different this time because the Democrats are doing all of the spending,” Senator John Barrasso of Pennsylvania falsely claimed this week.

While Mr. Trump was in office, tackling the debt limit remained bipartisan even as the national debt grew more than $7.8 trillion over four years and Republicans pushed forward without any Democrat support for legislative priorities, including their tax plan and failed efforts to repeal Obamacare. But some of the one-time spending authorized during the Trump administration, such as COVID relief, was approved with votes from Democrats.

“Every amount of money in the Trump administration was accounted for and also went into the current seven months of the Biden administration,” House Minority Leader Kevin McCarthy, a California Republican, claimed at a press conference Thursday. “The reason why we have a challenge of raising the debt now is because the Democrats want to spend another $5 trillion.”

But experts say past policies have ongoing consequences.

Strain said the argument that if Republicans hadn’t cut taxes in 2017, then the debt ceiling wouldn’t need to be changed now is “totally reasonable,” but so is the argument that the $6 trillion in COVID-related spending including $1.9 trillion by Democrats this year is also behind the need.

“It’s much harder than it appears on the surface to assign blame to a specific president or even a specific party,” Strain said.

The Bipartisan Policy Center estimated even if the debt limit is suspended until mid-December 2022, approximately $2.4 trillion in new debt would still be added, even if there were no future spending or tax changes. When the suspension ends, the debt ceiling would rise to cover additional debt accrued in the interim.

With the national debt currently sitting at roughly $28.5 trillion, the U.S. government has been using so-called extraordinary measures to make sure it meets its obligations, but those are expected to be exhausted as early as next month. Economists said if that happens it could result in billions in payments to Americans from Social Security to Child Tax Credit checks not going out. Millions of federal civilian employees and troops would not get paid. It would also roil markets on a global scale.