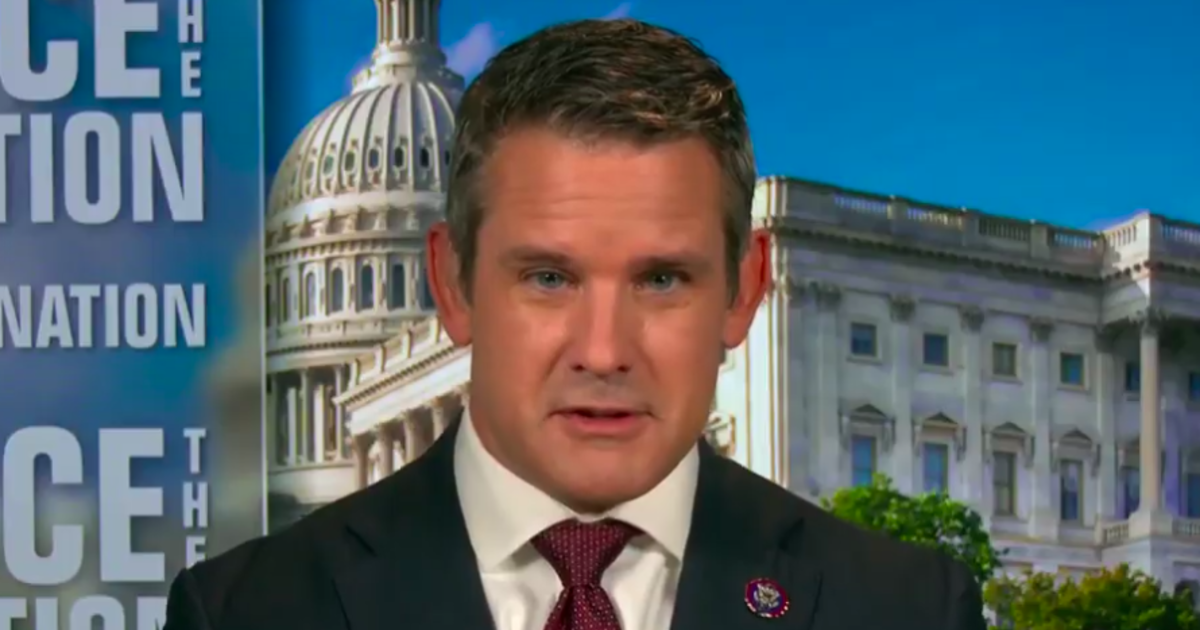 The following is a transcript of an interview with Representative Adam Kinzinger, Republican of Illinois, that aired on Sunday, September 12, 2021, on “Face the Nation.”

MARGARET BRENNAN: We go now to Republican Congressman Adam Kinzinger of Illinois. Good morning to you.

MARGARET BRENNAN Intelligence officials are predicting that Al Qaeda could reconstitute in as little as 12 months. Have you heard a strategy from the administration yet? Tomorrow, you’ll be able to put questions like that to the secretary of state.

REP. KINZINGER: Yeah, no, I haven’t. And, you know, all you keep hearing is this nebulous over the horizon capability. And I think what’s important is to understand what over the horizon capability is. It basically says if we see a target of opportunity, we have the ability to come forward and strike it, you know, great, we can do some of that. And in areas that you know, we hear about a one-off drone strike. But keep in mind, when we defeated ISIS, for instance, in Syria and Iraq, and obviously that’s ongoing, we had to embed people with the local forces to be able to get the intel necessary for those strikes. So, I’ve heard nothing but that nebulous over the, you know, over the horizon strike capability. And secondarily, the fact that you know, your prior guest was talking about having to rely on, in essence, the Russians or China is in there now in Pakistan is playing such a big role.

REP. KINZINGER: That is what happens when you leave a position that we have there in Afghanistan.

MARGARET BRENNAN: Well, I’m not going to litigate the leave or stay. It’s done, right? And the American public overwhelmingly seems to support the concept. But on the practicalities on the national security front, the president said yesterday to reporters when he was asked about the chaotic withdrawal. It’s hard to explain to anybody how else you could do it. He said if you pulled up a plane in another country, for example, you would also quote “have people hanging in the wheel well. Come on.” Was this unavoidable as he is suggesting?

REP. KINZINGER: You know, I don’t think it is, I mean, look, it’s- I get armchair quarterbacking and it’s easy for some people to come up and say that, you know, the prior president would have done it perfectly or not, whatever. But I think there are so many people that know military strategy and policy that say, Look, even if we made the decision that we’re leaving and that’s an unnegotiable decision, there were a couple of key points. We always talk about the air base in Bagram. We could have defended that until every American was out and every Afghan civ was out. Secondarily, let’s say that we still, you know, shut down that air base and we were down to that last week prior to the complete collapse of the Afghan government. That’s when those 6,000 marines and other- and soldiers that rushed into the Kabul airport actually could have pushed out and defended Kabul proper, the city, because the Taliban at that point had no interest in coming into the city yet. And we could have had the evacuation on our timetable as quickly as we could.

MARGARET BRENNAN: Well, on that evacuation, it was the ambassador in Kabul who issued the evacuation order on August the 12th. Kabul fell three days later. Is the secretary of state going to take the blame for that? Do you hold him responsible for that? And was the timeline here a real factor?

REP. KINZINGER:: You know, look, I think there’s a lot of people that bear blame and the Secretary of State is one of these, and I think it would be nice. And keep in mind, even under the prior president, I would say this exact thing for some people to just take responsibility. That’s what the American people want, is somebody to stand up and say, Look, this is on me. We know, obviously, that there is a detailed plan and that’s not always on. But in the case of- of the Secretary of State, when we began to see the collapse of the Afghan military, which actually started with the threats of the Taliban, we’re doing on these night letters against Afghan leaders and Afghan military leaders saying the US is leaving. We’re going to kill your family unless you give up your arms. When we began to see that fall apart, that’s when the order should have been given to basically in a defensive posture to get everybody out. We can and not have to wait two or three days prior because a lot of us were watching this happen. We were talking about it and- and it’s like it wasn’t a surprise to many of us.

MARGARET BRENNAN: I want to ask you about domestic extremism because you’re one of the two Republicans investigating the attack on the Capitol from January 6th. There are at least two extremist groups who are expected this coming Saturday to attend a rally in defense of those who were arrested. Have you been briefed on the security measures to protect the Capitol? Are you confident?

REP. KINZINGER: We haven’t been briefed yet. We know that the fence is coming back up. We expect to be briefed this week. Yes, I’m confident. And I feel confident in our- our, you know, our law enforcement. But I think it’s an important point here, everybody has a right, obviously, to protest and nobody would argue that. But George W. Bush said an amazing thing in his speech yesterday when he said he talked about Al Qaeda and domestic terrorists. And he said they may be culturally very different, but they’re “children of the same foul spirit.” And- and they seek to basically divide people that are different than them. This is why it’s important that we as Republicans, frankly, and as Americans, stand up and say we shouldn’t be at this point where we are truly worried for the seat of government every few months when there is a protest. So I hope it goes off well. I- I have a lot of faith in our law enforcement and hopefully we’ll find out more this week.

MARGARET BRENNAN: OK, so tomorrow? When- when will we hear more about the security measures? You’re not sure yet?

REP. KINZINGER: I would love to hear more tomorrow.

MARGARET BRENNAN: We’ll be watching that. I want to go to vaccines. This is also a national security threat, the health of the American public. The president issued this sweeping vaccine mandate because he’s frustrated 80 million Americans haven’t gotten that shot in the arm yet, and- and COVID is spiking again. He said he’s doing this because Republican governors have been cavalier with their constituents, particularly kids. Doesn’t he have a point?

REP. KINZINGER: Oh, I do, I think he has a point. Look, I- I don’t know if all of his mandates will hold up in court. There’s constitutional questions on some of it. I’ll leave that to lawyers because I really don’t know, but I think it’s going to save lives and- and the failure here comes in leaders that have basically used vaccine status as some tattoo of what political tribe you belong to. I mean, we all hear stories of people that are in, you know, very red areas that are embarrassed to say they’re vaccinated. That is insane and silly, and that is a problem with leaders, particularly Republican leaders, that don’t stand up and give cover to people and say, look, this is not what republicanism or conservativism should be. And you see these governors that do, you know? Mike DeWine in Ohio. And they just get pushed aside by some of those that are out to simply manipulate our base, raise money off of them and not care about their life, only care about what it means for their votes and their bottom line as politicians. It’s actually pretty sad.

MARGARET BRENNAN: The RNC itself, the Republican National Committee, has said that they want to file, but that’s rhetoric because nothing’s actually been instituted yet by the administration. Is that what you’re referring to when you say raising money off this?

REP. KINZINGER: Well, it’s- it’s everything. I mean, it’s them. It’s- it’s when you look at really any Republican, you know, not any Rep- there’s a lot that are not doing this, but there are some, you know, Republican members of Congress and stuff putting out fundraising after fundraising email about first, it’s going to be a vaccine mandate–

REP. KINZINGER: –next thing, the Gestapo is going to show up at your door and take your Bible away. Like, that’s not going to happen and that’s playing on people’s fear.

MARGARET BRENNAN: Congressman, thank you for your time today, and we will be back in a moment with a lot more FACE THE NATION, so stay with us.