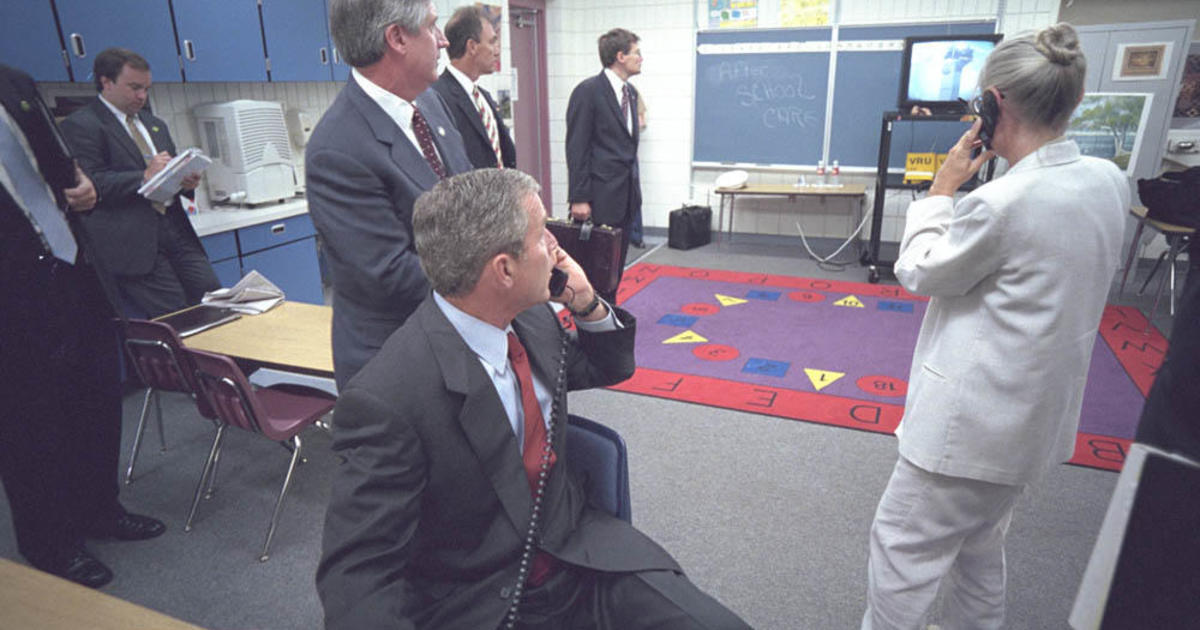 Michael Morell was President George W. Bush’s daily intelligence briefer on September 11, 2001 and with the president the morning they learned of the attacks.

Morell, who went on to serve as deputy director of the CIA from 2010 to 2013, and twice served as acting director during that period, appears in the CBS News Special, “Race Against Time: The CIA and 9/11,” which airs Friday, September 10 at 8 p.m. ET on CBS and will be available to stream on the CBS News app and Paramount+ on September 11.

CBS News: How did you first learn of the attacks, and what went through your mind when you did?

Michael Morell: I was in the presidential motorcade driving from the hotel where we had spent the night to [Emma E.] Booker Elementary School [in Sarasota, Florida], where the president was going to do an event around his education policy. It was during the drive from the hotel to the school that I heard about the first plane. And I had the reaction that pretty much everybody did: “It must be bad weather, must be a small plane, must be an accident.”

What questions did the president ask you as the attacks were unfolding? And how soon after the attacks did the CIA assess that they were the work of al Qaeda?

I had three substantive interactions with the president that day. The first was that the Popular Front for the Liberation of Palestine, early in the day, took public credit [for the attack], and the president asked me what I knew about the group. I told him about the group, about its history of terrorism against Israel, and that they did not have the capability to do this. About a half hour later, they withdrew their claim.

I told him I didn’t have any intelligence yet, but that I’d give him my best assessment. I was not aware at this point that the CIA, by comparing the flight manifests to its terrorist databases, had already linked the attack to al Qaeda.

So I told him that there were a couple of terrorist states, Iran and Iraq, that had the capability to do this – but in my view, neither of them had anything to gain, and both had everything to lose.

I said, “Mr. President, when we get to the end of the road and find out who did this, I’m certain we’re going to find bin Laden and al Qaeda.”

And then later that day, as we were flying back to Washington, DC, [CIA Director] George Tenet sent me a piece of intelligence to share with the president that one of our partner intelligence services in Western Europe shared with us. I couldn’t assess its credibility, but the message was stunning: “What happened this morning was the first of two waves of attacks on the United States.”

While still aboard Air Force One, you were told about specific threats to the aircraft itself. What were they? And what do you recall thinking as the president and his team made the trip back to Washington?

Andy Card, the White House Chief of Staff, took me aside and said, “I want to tell you something: You’re on this plane, you have a right to know. There’s been a threat made against Air Force One. We’re taking it seriously because the person who made the threat used the Secret Service’s callsign for Air Force One, which at that point was ‘Angel.'”

When he told me that, I was not worried. We were probably in the safest place we could be. There was an AWACS plane flying above us. There were fighter jets. There was nobody in the air who was going to fly a plane into us. And I figured if somebody had somehow put a bomb on board, it would have detonated already.

There were many surreal moments that day. Probably the most surreal was, as we were landing, the president’s military aide was looking out the windows on the left side of the aircraft. And I had become friends with him during the previous nine months. And he said, “Look.” And there was a fighter jet on the wingtip.

The president’s military aide then asked me, “Do you know what their job is?”

“Their job is, if someone fires a surface-to-air missile at us on final approach, to put themselves between that missile and the president of the United States.”

That is as surreal as you can get.

You were also with President Obama on the day of the raid in Abbottabad, Pakistan that eliminated Osama bin Laden. How is the threat from al Qaeda different today than it was when bin Laden was its leader?

Starting in the mid-2000s, after al Qaeda moved from the cities of Pakistan to the tribal areas of Pakistan, they started to rebound. And they developed a significant attack capability again. By 2005, they were able to conduct attacks in Madrid and London. And by 2006, they nearly conducted an attack to bring down 10 to 15 airliners over the Atlantic.

So first the Bush administration, and then the Obama administration, undertook a very aggressive policy to degrade al Qaeda in its safe haven. And by the time we got to the bin Laden raid in May of 2011, al Qaeda was already significantly degraded. And I think the killing of bin Laden put an exclamation point on that degradation. It really was the end of what I call the “second al Qaeda threat” – the first one being their capabilities on September 10, 2001, and the second this rebound that they had in the mid 2000s.

One of the important lessons about counterterrorism, though, is that it’s very easy to degrade these groups, but it’s also very easy for them to bounce back.

So now in the aftermath of the Taliban taking over in Afghanistan, there is a significant risk that if the United States does not do the right things – develop an intelligence capability to keep an eye on al Qaeda, develop a military capability to hit them if necessary, and then actually use that capability – and those are big “ifs” – then we’re going see al Qaeda bounce back again, for a third time, and again, possibly pose a significant threat to our allies, and to us, including the homeland.

Why did I say “if” earlier? Because as we shift our efforts to our peer competitors, China and Russia, it’s going to be difficult to have the resources dedicated to and to keep our focus on al Qaeda.

With the Taliban having seized power and terror threats again intensifying in Afghanistan, how do you think about America’s involvement there, 20 years after 9/11?

There were two wars in Afghanistan. The first one lasted just a few months, and that was a war against al Qaeda. And by the end of 2001, early 2002, we had won that war. al Qaeda was no longer in Afghanistan. We had either killed, captured, or driven out of Afghanistan every single member of al Qaeda. So we won that first war.

The second war was a war to try to change Afghan society and Afghan politics. To try to change a medieval, tribal, decentralized system into a Western liberal democracy with a centralized government. That was a 19-year war, and we lost that war. The Taliban won.

As I think about it that way, I think about what the Israelis call “mow the grass.” The Israelis know that they can’t change the society and the politics in Gaza. They know they can’t go in there and change all of that and make it a democracy and get rid of extremism. But they do know that Hamas will continually rebuild its capability. And they know that, every once in a while, they’re going to have to go in there and degrade that capability. That’s what they refer to as, “mow the grass.”

In retrospect – and hindsight is 2020, right? – we should have taken a “mow the grass” approach to Afghanistan. When you read between the lines of what President Biden is saying our policy is going to be going forward, that’s what it is. We will see if we can stay focused on that mission.

If that’s the policy today, then maybe it would have made sense for that to have been the policy in early 2002.