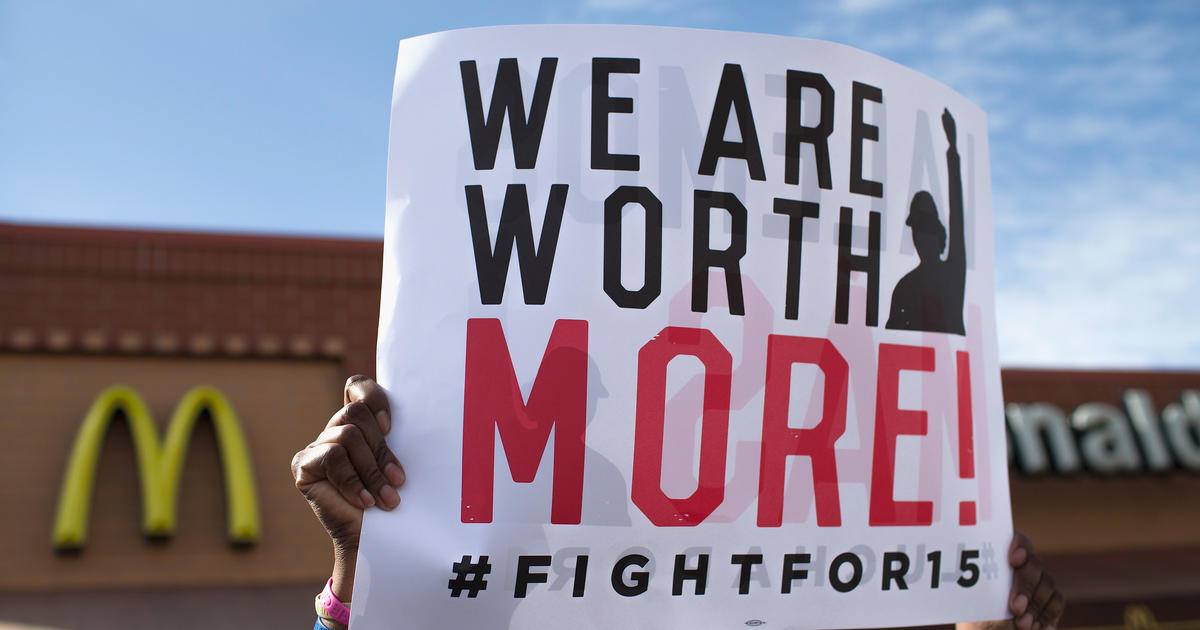 The federal minimum wage in the U.S. has remained glued at $7.25 an hour for the last 12 years, the longest stretch without a boost since it was first adopted in 1938. Yet there’s another revealing figure that underscores how the minimum wage — created by Congress after the Great Depression as a way to ensure that Americans were fairly paid for their labor — has failed to keep up with the times.

Even as workers have been more industrious — helping drive corporate profits, the stock market and CEO compensation to record heights — their pay has flatlined, or even declined when factoring in inflation. If the minimum wage had kept pace with gains in the economy’s productivity over the last 50 years, it would be nearly $26 an hour today, or more than $50,000 a year in annual income, one economist notes.

“That may sound pretty crazy, but that’s roughly what the minimum wage would be today if it had kept pace with productivity growth since its value peaked in 1968,” wrote Dean Baker, senior economist at the left-leaning Center for Economic and Policy Research, in a recent blog post.

Productivity — how much income someone generates in an hour of work — is critical for the economy because it helps determine a country’s standard of living. Yet rising productivity is no guarantee of a healthy economy. Equally important is how the fruits of productivity are divided.

To that end, “Having the minimum wage track productivity growth is not a crazy idea,” Baker said.

A recent CBS News poll found that most Americans support a hike in the federal minimum wage, a view that cut across socioeconomic status.

Nationwide, nearly 250,000 workers earn $7.25 per hour, while roughly 865,000 earn less than that, labor data show. To be sure, dozens of states and cities have boosted their baseline wages over the past few years, especially in areas with a high cost of living such as California, where the minimum wage is now $14 an hour for employers with at least 26 workers. Yet the federal minimum wage remains in effect in 20 states, mostly in the South and Midwest.

Baker’s analysis comes at an uneasy time for millions of workers across the U.S., even as they celebrate Labor Day. The COVID-19 Delta variant means many white-collar workers won’t return to the office until 2022, while many lower wage workers continue to cope with the risk of getting infected, not to mention confrontations with anti-mask or anti-vaccine customers.

Inequality also widened during the pandemic, with the wealth of the richest Americans surging as stocks soared, while those at the bottom were more likely to get laid off than white-collar workers and also more likely to work in jobs where they faced a great chance of catching COVID-19.

“Dean makes an important point. Whether or not you should argue it should be $26, it is a very strong point illustrating what has been happening with our economy,” said Ken Jacobs, the chair of the University of California, Berkeley Center for Labor Research and Education. Since the 1970s, “We have seen that complete divorce between wages and productivity and massively increased inequality with most gains going to people at the top.”

A $26-an-hour minimum wage might strike some as unrealistic, with Baker noting that his analysis is more of a “thought experiment” than a practical proposition. For one, more than tripling the federal baseline wage would result in a host of undesirable economic effects, from a spike in unemployment (as employers would need to cut jobs in order to pay the workers they could afford to keep on) to higher inflation.

“The problem is that we have made many changes to the economy that shifted huge amounts of income upward, so that we cannot support a pay structure that gives workers at the bottom $52,000 a year,” Baker wrote.

So what happened in the 1970s that decoupled the minimum wage from productivity gains? The weakening of unions over the past several decades is believed to be one cause, eroding the ability of workers to collectively bargain and win wage gains and other concessions.

Organized labor is now at its lowest membership levels in the modern era, with only about 1 in 10 workers represented by a union in 2019, down from 2 in 10 in 1983. At the same time, wage gains have increasingly gone to college-educated workers, a trend that accelerated after the Great Recession, as employers outsourced or automated jobs, reducing their need for modestly paid workers.

The current administration is aiming to shore up unions, with President Joe Biden vowing to be “the strongest labor president you have ever had.” Democratic lawmakers have supported the Protecting the Right to Organize (PRO) Act, which would make it easier for workers to organize and bargain collectively.

Labor Day was created by the labor movement more than a century ago to celebrate the American worker. But the past year hasn’t been a happy one for many of the nation’s 161 million workers.

For one, 9.1 million workers are losing pandemic unemployment benefits on the holiday as the aid expires. There’s not much recourse for those who are still struggling with unemployment, with the Biden administration saying it won’t extend the federal jobless programs. And with the Delta variant of the coronavirus spreading across the nation, there are signs of economic headwinds, notably a sharp slowdown in hiring.

The loss of pandemic jobless benefits “is going to be a disaster, and it’s an ironic disaster to happen on Labor Day,” said Daniel Kuehn, a research associate at the Urban Institute. “What gets people back to work is businesses and society opening back up and having income to spend.”

Meanwhile, the workforce is still below its pre-pandemic size, with the labor force reaching a historic peak of more than 164 million workers in February 2020, just before the crisis shut down the economy. Some people took early retirement, but many others remain unemployed, and some parents with children continue to sit out of the labor market due to remote school and health concerns.

That’s led to a hiring crunch for some employers, especially for restaurants, bars, retailers and other mostly low-wage businesses that involve dealing with the public. Some employers have blamed enhanced unemployment benefits for keeping workers on the sidelines, but economists don’t see any evidence yet to support that. In states that cut off those benefits in June, there was no difference in job growth than in states that maintained the aid.

The difficulty in finding workers has helped lift wages for low-paid employees, although higher wages might not be enough to convince some people to come off the sidelines, Jacobs said. “The fact that we saw some wage increases at the bottom and the middle in recent months is a positive sign for workers, but it doesn’t represent a long-run shift in the power balance in the workplace.”

“We don’t have a labor shortage — what we have is a wage shortage,” he added. “Too many [employers] are offering too little to make it viable for them to take those jobs.”