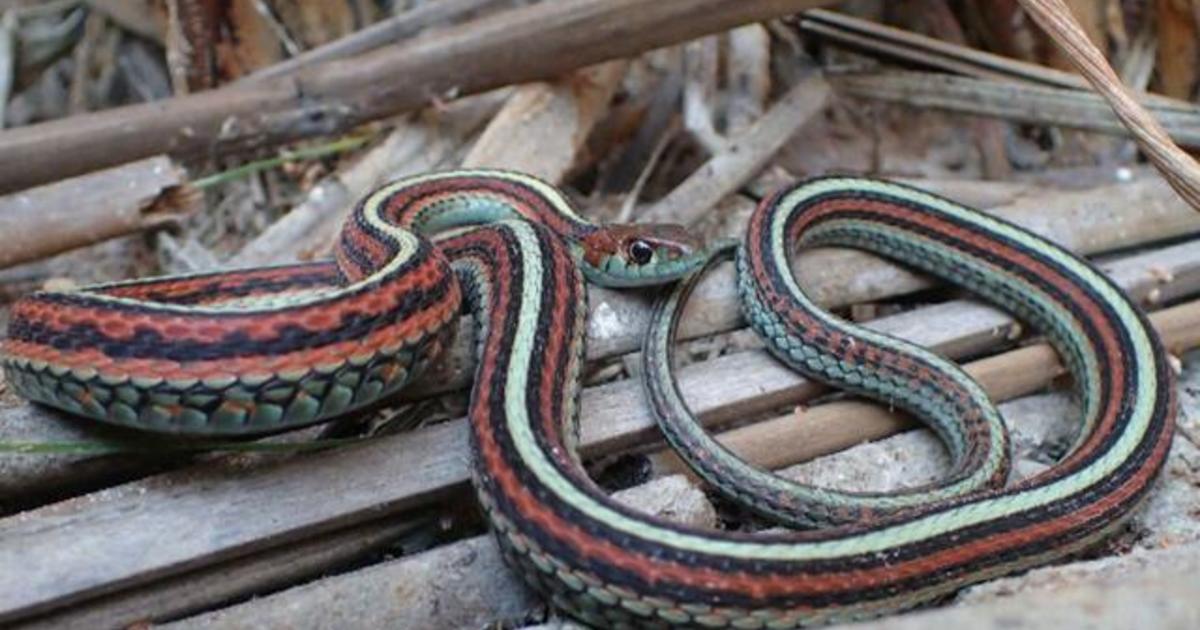 There are over 1,300 endangered or threatened species in the United States today. But many, though teetering on the edge of extinction, safely live on millions of acres held in trust by the federal government.

Some of that land isn’t as remote as you may think – in fact, if you’re an air traveler, you may have driven or flown right by it.

San Francisco International Airport may seem to be an unlikely place to protect an endangered species. But in a grassy area flanked by runways, dense housing and a freeway overhead, Natalie Reeder spends her days combing through brush to make sure endangered species like the San Francisco garter snake are on track to thrive.

“The snakes are a native species, and this is one of the few places left on the San Francisco peninsula where they can survive,” Reader explained to CBS News’ Michelle Miller. “So it’s the airport’s responsibility to take care of the population in the habitat where they live.”

Long before she was required by federal law to wear a mask on airport property, Reeder, the airport’s biologist-in-residence, was trying to save the garter snakes from extinction. The garter snake’s bright blue, orange and black markings are considered among the most beautiful in the world.

“I like snakes I think because they’re the ultimate underdog, everybody hates them. They are just a really interesting animal that is misunderstood,” she said. “So I think that drives me to want to protect them because they don’t have a lot of advocates.”

The unsuspecting travelers who get on and off 1,300 flights a day would surely be surprised to learn of the lengths the airport commission has gone to accommodate snakes. For starters, 180 acres have been set aside and fenced in just for them.

“When you think about airport lands they would typically always be for airport operations, for airplanes, for terminals and hotels,” said Doug Yakel, the San Francisco International Airport’s spokesman. “Whereas we are intentionally leaving this land in its natural state and actually doing things to avoid erosion, to avoid flooding of waters.”

The airport’s grass needs to be cut down every two weeks to reduce the risk of fire. But rather than relying on heavy machinery, the airport brings in a team of goats to chew down the grass, Yaken explained. He says it’s an example of how the high-tech airport is using a low-tech solution to preserve the space.

San Francisco’s airport isn’t the only one in the rare species protection business. In Oregon, Portland’s airport is caring for the federally threatened streak horned lark. Not to be outdone, Los Angeles International Airport has the federally protected El Segundo blue butterfly, while John F. Kennedy International Airport welcomes travelers with the diamondback terrapins.

People often have the mindset that they need to travel to the outdoors, but Reeder believes that San Francisco International shows how much nature already surrounds us.

“Even a property that looks kind of dumpy can have a really rare endangered species doing well on it,” she said.

This year, San Francisco airport’s efforts achieved a milestone: the U.S. Geological Survey and the U.S. Fish and Wildlife Service report a resurgence in the airport’s garter snakes, making it the world’s largest population of rare snakes in a place that otherwise would have been paved over.