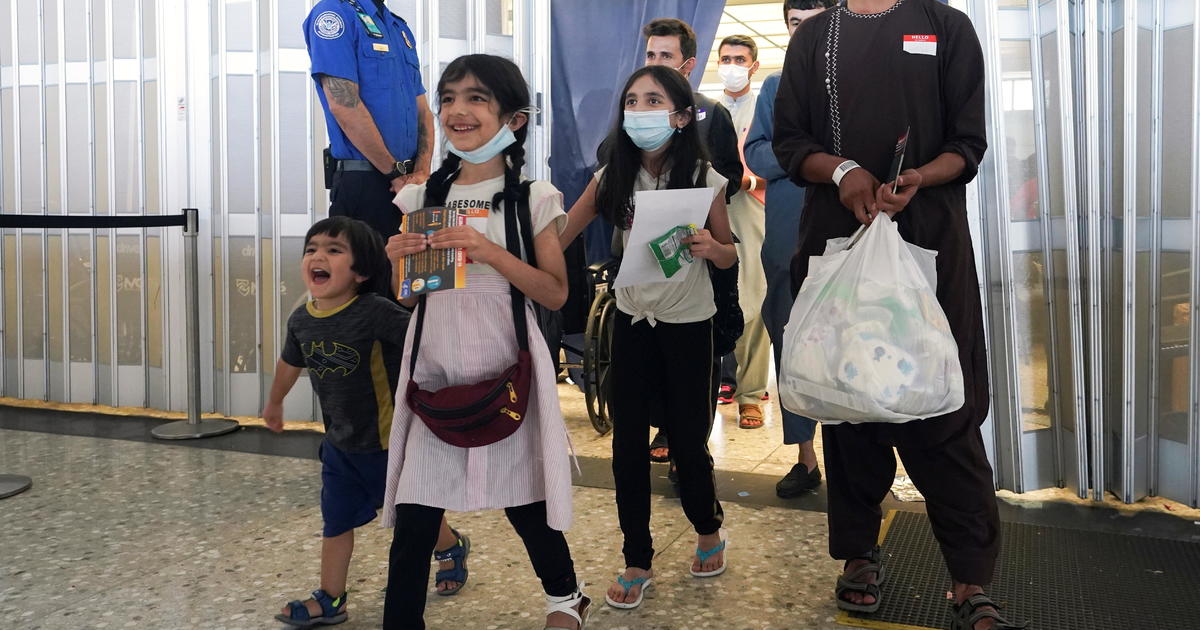 Homeland Security Secretary Alejandro Mayorkas says he expects the U.S. will resettle over 50,000 Afghan evacuees, including U.S. citizens, lawful permanent residents, visa holders, applicants for special immigrant visas (SIVs) and others at risk, including “journalists, and vulnerable women and girls.”

Before they land here, many have been taken to U.S. and NATO bases in Qatar, Bahrain, Kuwait, the United Arab Emirates, Saudi Arabia, Germany, Spain and Italy. According to federal data obtained by CBS News, almost 34,000 Afghan evacuees remained at these bases as of Friday.

One military base in Qatar is currently hosting approximately 6,400 evacuees, while two bases in Germany are housing a combined 16,800 evacuees, the most of any overseas base. In the past two days, about 6,000 more people have been relocated to the U.S. since CBS News first reported the data.

Most of the evacuees housed in Europe will make their way to the U.S., according to Pentagon spokesman John Kirby. Those chosen to be relocated to the U.S. have been completing their security screening at the overseas sites.

General Tod Wolters, the head of U.S. European Command said that as of Thursday, 58 individuals need further security processing, but he believes all of them will be cleared.

Just one individual out of the thousands who have come through Europe has “popped red,” according to Wolters. The Department of Defense does not consider this person to be a high threat. A background investigation of the individual is ongoing, as they remain in the appropriate custody of U.S. interagency officials with cooperation from Germany.

Evacuees are being screened against multiple government watchlists and vetted by personnel at the DHS, the Defense Department, the State Department, the National Counterterrorism Center and intelligence partners, according to Bob Fenton, DHS’ current lead on resettlement efforts.

Mayorkas acknowledged that while some Afghans have been flagged on terror watch lists in transit countries, they will not be permitted into the United States pending further investigation. “Our policy is not to board flights to the United States until they are cleared,” Mayorkas said.

He wouldn’t  say where individuals under investigation will be detained, but noted the U.S. is “working with international allies to address the disposition of those individuals.”

The capacity at the eight U.S.-based installations housing evacuees is 36,000, and U.S. Northern Command is building up to a capacity of 50,000 by September 15. Gen. Glen VanHerck told reporters Friday he doesn’t anticipate needing extra bases to accomplish that goal.

There are about 25,600 Afghan evacuees at U.S. military sites as of Friday, about 6,000 more than CBS News first reported on Wednesday, according to the federal data.

Fort McCoy, in western Wisconsin, is the military base temporarily housing the largest population of Afghan evacuees, about 8,800. Its capacity is 10,000, although in the next few days, its capacity will be expanded to accommodate 13,000, according to two sources familiar with the operations.

Near El Paso, Texas, at Fort Bliss, there are  about 6,100 Afghan evacuees.  Joint Base Mcguire-Dix-Lakehurst in New Jersey, is housing 3,700. There are 3,650 at  Fort Pickett in Virginia, 1,600 at Fort Lee, Virginia and about 800 in Quantico, Virginia. Holloman Air Force Base in New Mexico received its first group of more than 100 evacuees on Tuesday and now as 650 evacuees. The latest housing site announced by the Biden administration is Camp Atterbury in Indiana, which currently houses about 65 evacuees, according to the federal data.

Mayorkas confirmed that the U.S.has also admitted a “small number” of unaccompanied Afghan children, Friday. U.S. immigration authorities have designated at least 34 Afghan children as unaccompanied minors, CBS News previously reported. Some of the children have been sent to HHS-overseen shelters for undocumented migrant youth.

While Mayorkas did not  give an updated number of unaccompanied minors, he said, “We do expect others of course to be evacuated, to be admitted into the United States,” Mayorkas said. Asked about the need to accept orphans, Mayorkas said that while he has no information pertaining to this specifically, “We are committed to providing relief to individuals in need.”

President Biden has tapped the former governor of his home state, Jack Markell, to temporarily serve as a White House point person on the resettlement of refugees from Afghanistan. A longtime Biden associate, Markell was also nominated in late June to serve as ambassador to the Organization for Economic Cooperation and Development, based in Paris. Markell will work across the federal government and with the private and non-profit sectors to ensure Afghans who want to resettle in the U.S. are thoroughly screened, a White House official confirmed. Markell’s appointment was first reported by The Washington Post.

Refugee and immigration advocates have been pushing the White House to provide mental health counseling and culturally sensitive services to Afghan evacuees. Mayorkas said Friday he’s met with dozens of non-profit and community organizations, and vowed to provide “cultural competency, access to counsel, trauma counseling and pastoral care” to at-risk Afghans arriving in the U.S.

One of the ways the U.S. military is handling cultural differences is by establishing “Mayor’s Cells” at the bases housing Afghans. The cell allows military officers and Afghan partners to discuss issues “in the village,” as VanHerck put it. These installations, he noted, are effectively small cities, so this approach is tailored to addressing any problems that come up in a culturally familiar and sensitive way.

Kathryn Watson contributed to this story.