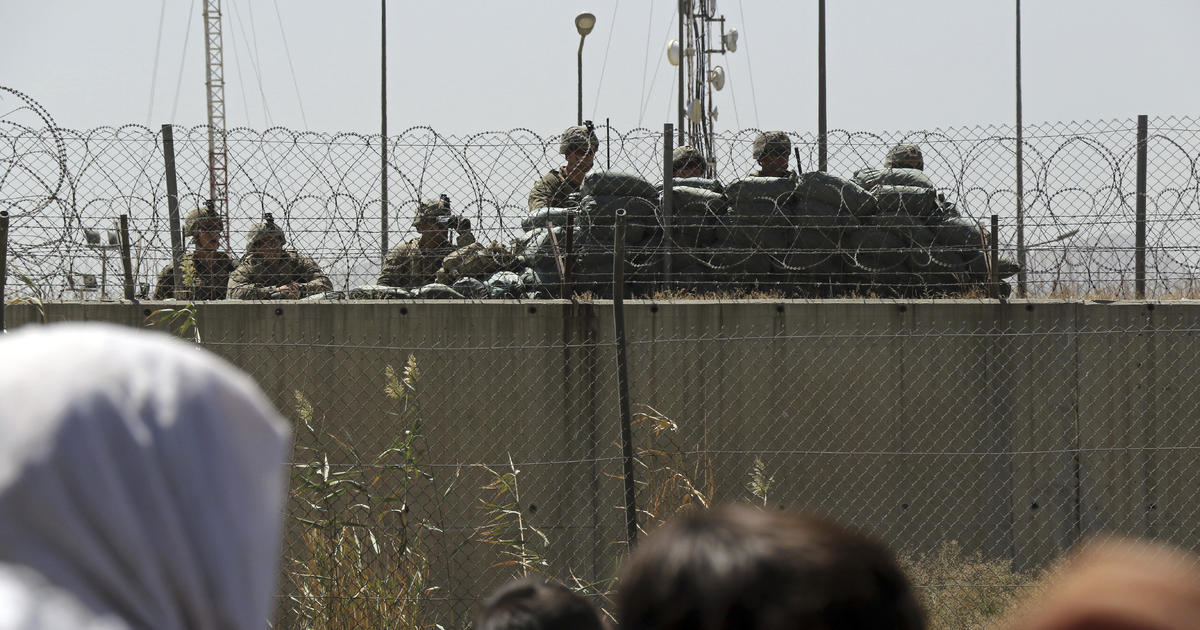 Rockets were launched toward Kabul’s international airport Monday morning as the U.S. withdrawal from Afghanistan entered its second-to-last day. There was no immediate word on who fired them.

White House press secretary Jen Psaki issued a statement saying President Biden was briefed “on the rocket attack” and “was informed that operations continue uninterrupted at HKIA, and has reconfirmed his order that commanders redouble their efforts to prioritize doing whatever is necessary to protect our forces on the ground.”

The Associated Press cited witnesses as saying the rockets hit Kabul’s Salim Karwan neighborhood. Gunfire then broke out, but it wasn’t clear who was shooting, the AP said.

The Reuters news service reported that as  many as five rockets were fired but were intercepted by a missile defense system, according to a U.S. official.

There were no initial reports of casualties.

The attempted rocket attack came the day after the U.S. conducted an airstrike against an ISIS-K vehicle laden with explosives near the airport. It was the second such strike against the militant group since a deadly attack against U.S. forces last week.

Captain Bill Urban, a Central Command spokesman, said in a statement that the strike was carried out by a drone and eliminated “an imminent ISIS-K threat” to Hamid Karzai International Airport. Urban said the U.S. is confident the strike hit the target, and initial reports indicated there were no civilian casualties.

But an Afghan official told The Associated Press three children were killed in the strike. Later on Sunday, Urban said Central Command was aware of the reports that civilians were killed, and that they were “still assessing the results of this strike.”

“We know that there were substantial and powerful subsequent explosions resulting from the destruction of the vehicle, indicating a large amount of explosive material inside that may have caused additional casualties,” Urban said. “It is unclear what may have happened, and we are investigating further.”

A defense official told CBS News there is uncertainty over whether the strike destroyed a car bomb or killed a suicide bomber riding in the car. Initial reports indicated that the car was carrying a suicide bomber, but the size of the secondary explosion has convinced some analysts that it was a fully loaded car bomb.

A defense official said the strike was ordered after two men were seen loading explosives into the trunk of a car. The car was hit by a Hellfire missile, which produced a small explosion followed by a much larger secondary explosion.

Bilal Karimi, a senior aid to the Taliban’s spokesman, said the airstrike hit the vehicle near the airport. He said three suspected individuals were in the vehicle at the time of the strike. Karimi said the U.S military had told the Taliban that a vehicle full of explosives would arrive in Kabul and that the U.S. would destroy it.

Last week’s attack on the Abbey Gate at the Kabul airport left at least 170 dead, including 13 U.S. service members. U.S. officials have said a member of ISIS-K carried out the bombing, and vowed to retaliate against those responsible.

A U.S. airstrike on Friday, the first since the attack, killed two “high-profile” ISIS-K planners and facilitators and wounded another, according to Pentagon officials.

Sunday morning’s strike came after the State Department issued an alert warning people not to come to the airport because of a “specific, credible threat.”

The operations against ISIS-K militants come as the U.S. rushes to evacuate Americans and Afghan allies from the city ahead of President Biden’s withdrawal deadline of August 31. The White House said the U.S. facilitated the evacuation of 2,900 people from the capital over a 24-hour period beginning Saturday morning, and have helped 114,000 people leave since August 14.

Jake Sullivan, the White House national security adviser, told “Face the Nation” on Sunday that the U.S. would continue to go after the ISIS-K militants who orchestrated the attack at the airport.

“[The president] he also is going to talk to his commanders about whatever set of tools and capabilities they need to get the people who attacked and killed our troops at the Kabul airport and to make sure that we are degrading and debilitating the group, ISIS-K, that conducted this attack,” Sullivan said. “So, yes, we will continue to take the kinds of over-the-horizon strikes like we did over the weekend against the ISIS-K facilitators and plotters. And, yes, we will consider other operations to go after these guys, to get them and to take them off the battlefield.”

Mr. Biden vowed to retaliate against those who facilitated Thursday’s deadly attack.

Pentagon spokesman John Kirby told reporters on Saturday that there were active threats against the airport, which were “still very real” and “dynamic.”

In a press briefing last week, General Frank McKenzie, the head of U.S. Central Command, said the U.S. was closely monitoring the threat of a vehicular suicide bomb in a small car or a large truck.