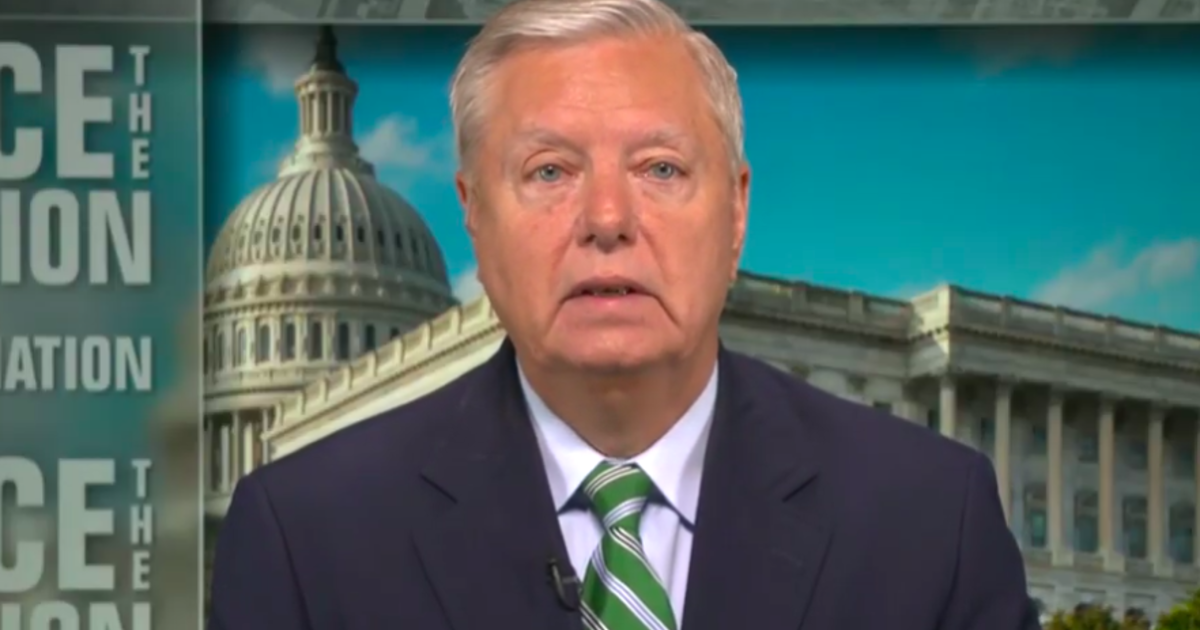 The following is a transcript of an interview with South Carolina Senator Lindsey Graham that aired on Sunday, August 29, 2021, on “Face the Nation.”

ED O’KEEFE: We turn now to Republican Senator Lindsey Graham. He’s in Clemson, South Carolina, this morning. Senator, thank you for joining us. I know you are no fan of how the president is conducting this withdrawal but give us a specific sense of what you would have done differently.

SENATOR LINDSEY GRAHAM: Well, number one, I wouldn’t have withdrawn. I would have kept the counterterrorism forces on the ground. Your reporter indicated that when we have people on the ground working with indigenous forces, that’s the best insurance policy against another 9/11. I would have held the Taliban to the conditions set out in the agreement with Trump. But let me tell you where I think we’re at. This is a catalyst-, catastra-, just a fair beyond my ability to describe it. It’s been a very emotional couple of days for all of us. The parade of horribles are about to unfold. We’re leaving thousands of Afghan allies behind who fought bravely with us. We’re going to leave hundreds of American citizens behind. The chance of another 9/11 just went through the roof. These drone attacks will not degrade ISIS. The number of ISIS fighters have doubled. We’ve turned our back on our allies who’s going to help us in our- in the future. And we set the conditions for another 9/11. I’ve never been more worried about an attack on our homeland than I am right now. And we did not end this war. President Biden said that he wanted to take this- Afghanistan off the plate for future presidents. He’s done the exact opposite. For the next 20 years, American presidents will be dealing with this catastrophe in Afghanistan. This war has not ended. We’ve entered into a new deadly chapter. Terrorists are now in charge of Afghanistan.

ED O’KEEFE: Let me let me just have you clarify one thing you said. We’re going to leave thousands of Americans behind. State Department believes it’s only a few hundred.–

ED O’KEEFE: I wanted to make sure you didn’t know something we didn’t.

ED O’KEEFE: — Yeah. You’ve talked about propping up some former Afghan government officials as a new provisional government that the United States should recognize.

ED O’KEEFE: –How would that work? And would that require us having a far greater presence in the country?

SEN. GRAHAM: Good question. First thing we need to do is not recognize the Taliban as the legitimate government of Afghanistan. This is a coup d’état to Boris Johnson said don’t recognize the Taliban. You don’t want to recognize a terrorist group who takes land force. So we have the vice president under the constitution of Afghanistan and Panjshir Province. He has a resistance force. We can provide humanitarian aid. We can provide military assistance. I’m not suggesting we have troops on the ground, but that can be an evacuation site for the future. The last thing you want to do is legitimize this terrorist takeover of Afghanistan. We’re going to have hostages left behind American citizens. Our counsel, the Biden administration, do not legitimize the Taliban, do not recognize them, because if you do, you’re going to put Americans at risk all over the world because other terrorist organizations will say how the best way to get America’s attention and legitimacy is to kidnap some Americans or people who fought with America. We’re in a very dangerous situation in Afghanistan. And I worry about the consequences of how we deal with Afghanistan can affect our footprint all over the world.

ED O’KEEFE: Sure. In your view, what kind of consequences should the president face for the decisions he made on Afghanistan?

SEN. GRAHAM: Well, did he get good advice and turn it down? Did he get bad advice and take it? What the hell happened? Whose decision was it to pull all the troops out? Was it good advice, ignored? I just don’t know. I think he should be- be facing a lot of consequences here, because the one thing he wanted to do, and he’s a decent man, it’s not about him being a decent man, is he wanted to end the war in Afghanistan and make sure we didn’t have to deal with it in the future. He’s done the exact opposite. General Biden’s fingerprints are all over this. He’s created the conditions for ISIS to flourish in Afghanistan. They’ve doubled the number of troops available because of the jailbreak. A terrorist organization called the Taliban is now in charge of the country. The likelihood of an attack on our homeland is through the roof. It was medium a month ago. It’s got to be high as hell right now.

SEN. GRAHAM: And you cannot break ISIS’s will through drone attacks. You’ve got to have people on the ground hitting these people day in and day out. You can’t do it over the horizon. He deserves a lot of accountability for this. And I’m sure it will be coming.

ED O’KEEFE: Senator, one thing, one word I don’t hear you using is one you were using before the attack on Thursday, and that is you called for his impeachment over Afghanistan. Do you still feel he should be impeached–

SEN. GRAHAM: Yeah. Yeah, I think it’s dereliction of duty to leave hundreds of Americans behind enemy lines, turn them into hostages, to abandon thousands of Afghans who fought honorably along our side, to create conditions for another 9/11 that are now through the roof. Yeah, I think he’s been derelict in his duties as commander-in-chief. I don’t think he got bad advice and took it. I think he ignored sound advice. And this is Joe Biden being Joe Biden. He’s been this way for 40 years, but now he’s the Commander-in-Chief. He’s not a senator. He’s not the vice president. These are Commander-in-Chief decisions. I think the best you could describe him as dereliction of duty at the highest level says.

ED O’KEEFE: Senator Graham, an erstwhile friend of this- of the president, obviously disagrees with him on this. We appreciate your time this morning. Good to see you. And we’ll be right back.