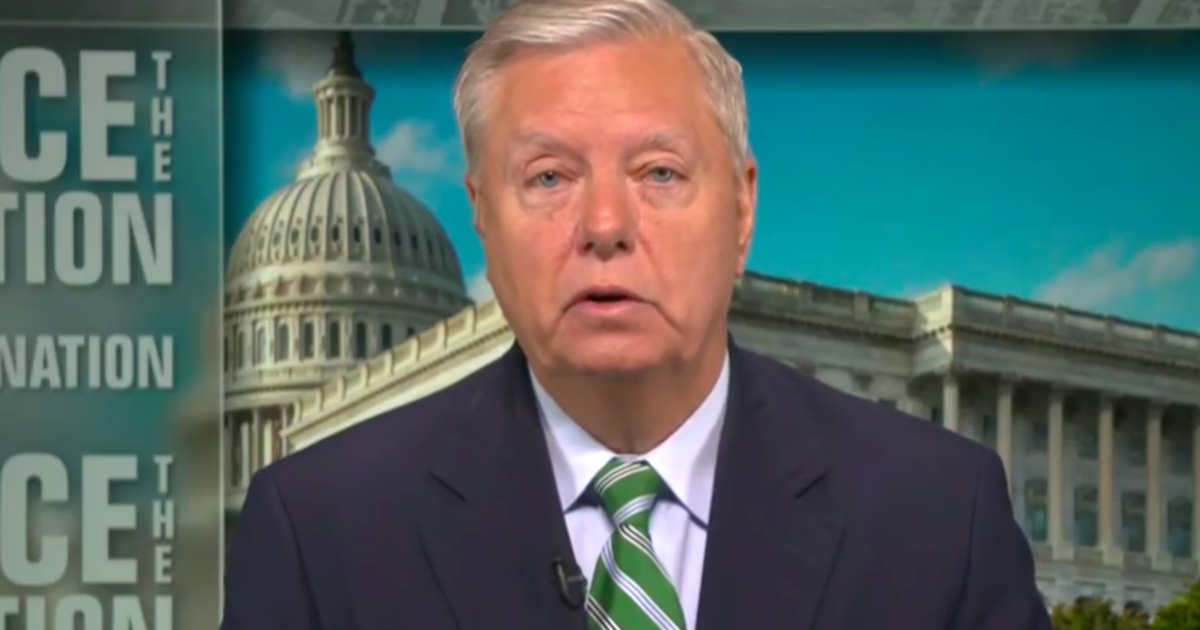 Washington — Republican Senator Lindsey Graham of South Carolina lambasted President Biden for his execution of the U.S. withdrawal from Afghanistan, warning a “parade of horribles” is set to unfold with U.S. citizens and Afghan allies left in the country after Tuesday’s deadline.

“It’s been a very emotional couple of days for all of us. The parade of horribles are about to unfold,” Graham said in an interview with “Face the Nation. “We’re leaving thousands of Afghan allies behind who fought bravely with us. We’re going to leave hundreds of American citizens behind. The chance of another 9/11 just went through the roof.”

Mr. Biden has continued to stick with his August 31 deadline for the conclusion of the U.S. mission in Afghanistan, and the Pentagon has begun its draw down of remaining troops sent to Kabul to help the State Department with the evacuations of thousands of U.S. citizens and Afghans who aided American forces during the 20-year war.

Since August 14, 114,400 people have been airlifted out of Afghanistan, according to a White House official, including 2,900 over a 24-hour period that began early Saturday morning. Jake Sullivan, Mr. Biden’s national security adviser, told “Face the Nation” the Biden administration believes roughly 300 Americans are still in the country.

The historic airlifts of U.S. citizens and Afghan allies out of Afghanistan have begun to wind down ahead of Tuesday’s withdrawal deadline, though the Biden administration continued to shuttle people out of Kabul in the wake of a deadly attack outside the main airport’s gates Thursday, which claimed the lives of at least 170 people, including 13 U.S. service members.

The group ISIS-K, the Afghan affiliate of the terrorist group ISIS, claimed responsibility for the blast, and Mr. Biden vowed retribution for the attack. The U.S. has since launched two airstrikes against the militant group. The first, on Friday, killed two “high-profile” ISIS-K planners and facilitators. The second, on Sunday, took out an ISIS-K vehicle near the airport in Kabul that was laden with explosives.

Graham, though, said he does not believe the strikes launched by the U.S. will degrade ISIS and said the number of ISIS fighters has “doubled.”

“You cannot break ISIS’ will through drone attacks,” he said. “You’ve got to have people on the ground hitting these people day in and day out. You can’t do it over the horizon.”

The South Carolina senator, a close ally of former President Donald Trump, said he believes Mr. Biden has left the U.S. at risk of another attack on the homeland, with the Taliban now in control of Afghanistan following the collapse of its government earlier this month, and by creating the conditions “for ISIS to flourish.”

“We set the conditions for another 9/11,” he said. “I’ve never been more worried about an attack on our homeland than I am right now. And we did not end this war. President Biden said that he wanted to take Afghanistan off the plate for future presidents. He’s done the exact opposite. For the next 20 years, American presidents will be dealing with this catastrophe in Afghanistan. This war has not ended. We’ve entered into a new deadly chapter. Terrorists are now in charge of Afghanistan.”

Graham, like some Republicans, said he believes Mr. Biden should be impeached for his handling of the U.S. withdrawal from Afghanistan and suggested the president ignored “sound advice” on the path forward in the country.

“I think it’s dereliction of duty to leave hundreds of Americans behind enemy lines, turn them into hostages, to abandon thousands of Afghans who fought honorably along our side, to create conditions for another 9/11 that are now through the roof,” he said. “This is Joe Biden being Joe Biden. He’s been this way for 40 years, but now he’s the commander in chief. He’s not a senator. He’s not the vice president. These are commander-in-chief decisions.”

With the Taliban now controlling Afghanistan, Graham urged the Biden administration not to give the group legitimacy, warning it will embolden terrorist organizations around the world.

“If you do, you’re going to put Americans at risk all over the world because other terrorist organizations will say how the best way to get America’s attention and legitimacy is to kidnap some Americans or people who fought with America,” he said. “We’re in a very dangerous situation in Afghanistan. And I worry about the consequences of how we deal with Afghanistan can affect our footprint all over the world.”