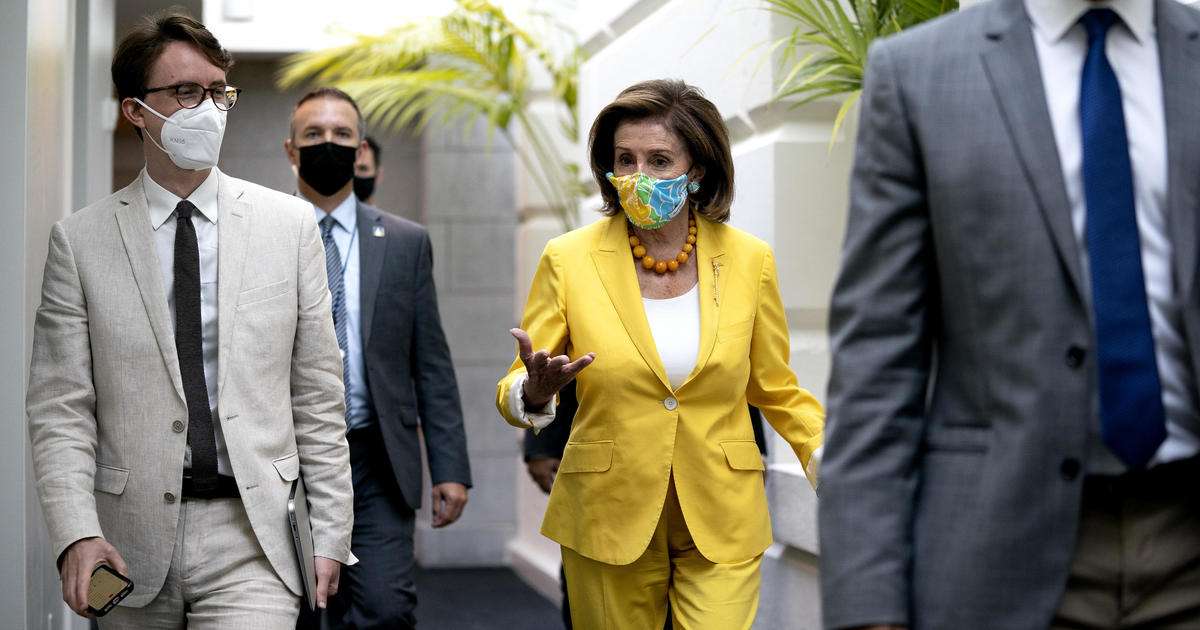 Washington — The House on Tuesday voted to advance the $1 trillion bipartisan infrastructure bill while simultaneously approving a $3.5 trillion budget blueprint that clears the way for Democrats in Congress to take action on a sweeping package that includes President Biden’s key domestic policy proposals.

Lawmakers voted along party lines 220 to 212 to approve a rule that deemed the budget framework as passed, a key step toward enacting Mr. Biden’s broader families plan, and set a September 27 deadline for the House to pass the infrastructure measure. The procedural resolution also moved forward a voting rights bill, a major priority for congressional Democrats, and a vote to pass that legislation is expected later Tuesday.

“Passing this rule paves the way for the Building Back Better plan, which will forge legislative progress unseen in 50 years, that will stand for generations alongside the New Deal and the Great Society,” House Speaker Nancy Pelosi said on the House floor ahead of the vote. “Any delay in passing the rule threatens the Build Back Better plan, as well as voting rights reform, as well as the bipartisan infrastructure bill. We cannot surrender our leverage.”

In a statement, the speaker said she is “committing to pass the bipartisan infrastructure bill by September 27” and will “rally House Democratic support for its passage.”

The vote in the House was initially set to take place Monday evening, but was delayed after Pelosi and a group of moderate Democrats were at a stalemate over when the chamber would take up the bipartisan infrastructure plan passed by the Senate this month.

The group of moderates — which started at nine lawmakers and grew to 10 Monday — threatened to block the budget blueprint unless the House votes on the infrastructure bill first, which they said should be swiftly sent to Mr. Biden’s desk.

Pelosi, meanwhile, had repeatedly said the House would not vote on the infrastructure plan, which focuses on physical infrastructure and left out many of Democrats’ priorities, until the Senate passes the sweeping social spending plan. Progressive Democrats, too, have threatened not to support the bipartisan infrastructure bill until the larger package wins Senate approval.

Democrats are using a process called budget reconciliation to approve the larger spending package, which includes Mr. Biden’s plans for child and elder care, an expansion of Medicare, universal pre-K and family and sick leave. Passage of the budget framework is the first step in that process, and it’s approval allows the Democratic-led Congress to fast-track the sweeping families measure and pass the Senate without GOP support.

The standoff between Pelosi and the moderate Democrats derailed initial plans for the House to advance the infrastructure bill and budget blueprint Monday evening. But the logjam broke Tuesday, as the House convened to pass the procedural measure tying approval of the budget framework with the commitment for the chamber to vote on the infrastructure bill by September 27, as well as advancing the voting rights bill.

All 10 moderates demanding a vote on the infrastructure vote before the budget framework supported the procedural maneuver.

“We’re really, really, really going to consider it on the 27th,” House Rules Committee Chairman Jim McGovern, a Democrat from Massachusetts, said during a meeting of his panel ahead of the House vote.

Mr. Biden and Democratic leaders are using a two-track strategy to move the bipartisan infrastructure bill and broader families plan through Congress and put their passage on firmer footing, given that Democrats hold slim majorities in both chambers.

“The House can’t afford to wait months or do anything that will jeopardize passing this infrastructure bill or losing the bipartisan support behind it,” Democratic Congressman Josh Gottheimer of New Jersey, leader of the moderates, wrote in the New Jersey Star-Ledger on Monday. “As they say in Washington, time kills bills. We have this opportunity within our grasp — let’s not blow it.”

The group of moderate Democrats withholding support for the budget resolution would’ve tanked its passage, as Democrats hold a narrow majority in the House and Pelosi can only afford to lose support from up to three members of her caucus, with all Republicans opposing the measure.

Both the bipartisan infrastructure bill, negotiated by a group of senators and the White House, and the larger social spending package are key to Mr. Biden’s economic agenda. Congressional approval of the two would give the president significant legislative victories as his administration reels from the chaotic withdrawal from Afghanistan.

Meanwhile, the larger plan is still being drafted by congressional committees, but will include Democrats’ priorities on social programs that were left out of the infrastructure bill.

While Congress can now take swift action on the $3.5 trillion spending measure with approval of the budget blueprint, its passage in the Senate isn’t a sure thing, as two key moderate senators, Democrats Joe Manchin of West Virginia and Kyrsten Sinema of Arizona, have objected to the $3.5 trillion price tag.