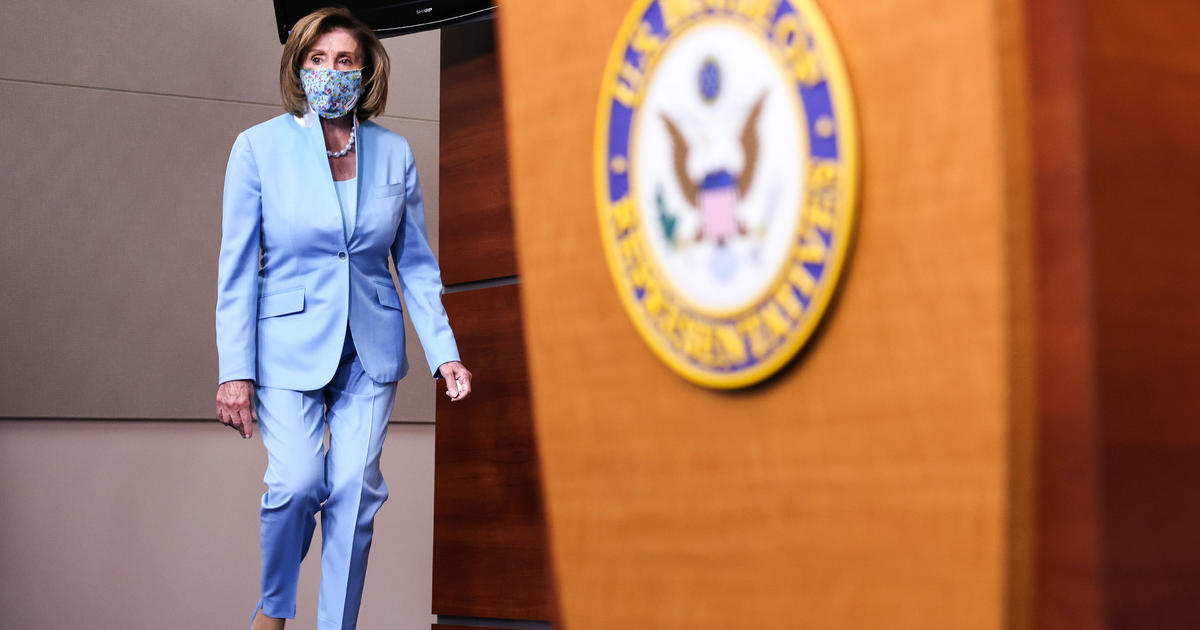 Washington — As the House prepares to vote Monday to advance the bipartisan infrastructure bill and broader budget blueprint, House Speaker Nancy Pelosi remains locked in a standoff with a group of moderate Democrats who are pushing for the chamber to swiftly take up the targeted infrastructure proposal.

The House is pausing its August recess to return to Washington for a procedural vote to move forward the infrastructure plan and budget resolution, passage of which will allow Congress to begin the process to take up a sweeping $3.5 trillion spending package through reconciliation. Both measures were approved by the Senate earlier this month.

But the group of nine moderate Democrats has threatened to withhold support for the budget blueprint, which the House is expected to move to this week, unless Pelosi holds a vote on the bipartisan infrastructure bill first.

“You don’t hold up a major priority of the country, and millions of jobs, as some form of leverage,” the moderate Democrats wrote in an op-ed for the Washington Post. “The infrastructure bill is not a political football.”

The central issue for the group is the timing of the vote on the bipartisan infrastructure bill, which may not come for weeks as Pelosi has repeatedly pledged not to bring the targeted measure to the House floor until the Senate clears the broader spending package. Mr. Biden and Democratic leaders are using a two-track strategy to move the bipartisan infrastructure bill and broader $3.5 trillion plan through Congress and put their passage on firmer footing, given that Democrats hold slim majorities in both chambers.

“The House can’t afford to wait months or do anything that will jeopardize passing this infrastructure bill or losing the bipartisan support behind it,” Democratic Congressman Josh Gottheimer of New Jersey, one of the leaders of the nine moderates, wrote in the New Jersey Star-Ledger on Monday. “As they say in Washington, time kills bills. We have this opportunity within our grasp — let’s not blow it.”

Democrats hold a narrow majority in the House, and Pelosi can only afford to lose support from up to three members of her caucus if all Republicans oppose the rule, which sets the parameters of the floor debate and will be voted on by the House on Monday evening.

While Pelosi set the vote to advance both measures in an effort to mitigate the concerns of the nine moderates, they’ve continued calling for the House to move on the infrastructure bill first.

But even as the group of nine digs in, the speaker has not budged from her push for the House to vote on the budget framework before the bipartisan infrastructure bill, telling her fellow Democrats in a note Sunday they “must move quickly to pass the budget resolution this week.”

“Any delay to passing the budget resolution threatens the timetable for delivering the historic progress and the transformative vision that Democrats share,” Pelosi, a Democrat from California, wrote, adding the House is “hard at work” to enact the $3.5 trillion spending plan and bipartisan infrastructure bill before October 1.

Progressive House Democrats, too, have said they will not support the bipartisan infrastructure bill until the larger budget measure passes the Senate.

Both the bipartisan infrastructure bill, negotiated by a group of senators and the White House, and the $3.5 trillion package make up key aspects of Mr. Biden’s domestic policy agenda. Congressional approval of the two would give the president significant legislative victories as his administration reels from the chaotic withdrawal from Afghanistan.

Meanwhile, the larger $3.5 trillion package is still being drafted by congressional committees and will include Democrats’ priorities on social programs that were left out of the infrastructure bill.

Democrats are using a process called budget reconciliation to pass the larger plan, which allows it to clear the Senate without Republican support. But its passage in the upper chamber isn’t a sure thing, as two key moderate senators, Democrats Joe Manchin of West Virginia and Kyrsten Sinema of Arizona, have objected to the $3.5 trillion price tag.

Both Manchin and Sinema voted to pass the budget resolution, the first step in the reconciliation process, but Manchin on Monday urged the House to “unite and pass a critical priority of the American people — improving our nation’s infrastructure.”

“This is not about party or politics, it’s about doing what is right for the country,” he said in a statement. It would send a terrible message to the American people if this bipartisan bill is held hostage.”