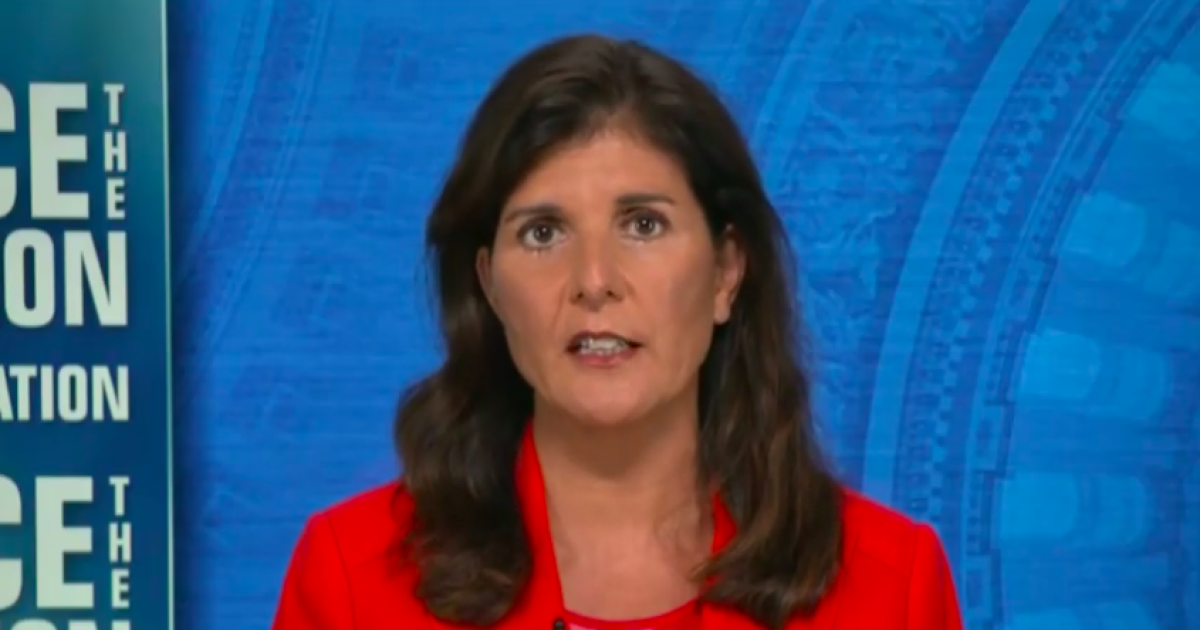 The following is a transcript of an interview with former U.N. Ambassador Nikki Haley that aired on Sunday, August 22, 2021, on “Face the Nation.”

FORMER US AMBASSADOR TO THE UNITED NATIONS NIKKI HALEY: I agree with you. They’re not negotiating with the Taliban, they’ve completely surrendered to the Taliban. They surrendered Bagram Air Force Base, which was a major NATO hub. They surrendered $85 billion worth of equipment and weapons that we should have gotten out of there. They have surrendered the American people and actually withdrew our troops before they withdrew the American people. And they’ve abandoned our Afghan allies who kept people like my husband safe while they were overseas deploying. So, no, there was no negotiating. This was a complete and total surrender and an embarrassing failure.

MAJOR GARRETT: Do you believe, Madam Ambassador, that the Biden White House has to talk and negotiate essentially with the Taliban now just to ensure American safety as this evacuation continues?

MAJOR GARRETT: Someone you know well, the former secretary of state in the Trump administration, Mike Pompeo, stood alongside one of the Taliban founders and helped negotiate this deal in which President Trump signed an agreement to have United States forces out earlier this year. Did that set in motion what we’re seeing now?

AMB. HALEY: You know, I think everybody’s wanting to go back and talk about Trump. The truth is, under four years of Trump, Afghanistan was safe. We made sure that we kept terrorism at bay and that we came from a strength of position. What’s happened in seven months of Biden is we’ve completely surrendered and we’ve humiliated ourselves in the eyes of the world. The thing is, there are times where you have to negotiate with the devil, but you negotiate with the devil from a point of strength. You don’t do it from a point of weakness. We literally have no leverage right now with the Taliban. All we’re going to see them do is they’re going to buy time and act like they’re going to be nice until August 31st, and then all of those women, all of those girls, everything is going to go back to the way it was. You’re going to have sex slaves. You’re going to have child marriages. You’re going to have kids that are girls that are no longer allowed in school. You’re going to have our Americans, any that are there, will be in danger and all of our Afghan- Afghan allies will be killed if we don’t do something. This is serious. The Biden administration needs to go back and extend that August 31st deadline and make sure that the Taliban knows they’ve got to let people into the airport. We’ve got to get our Americans out. We’ve got to stay true to those Afghan allies that we made promises to. And we’ve got to make sure we do this in a very strong way going forward.

MAJOR GARRETT: Yes or no question. Should the United States government expand the perimeter around the airport?

AMB. HALEY: I think right now we have to do whatever it takes to get to our Americans. What a lot of people don’t realize is the Americans we need to get out are not near Kabul. They’re actually on the outskirts out of there. The Afghan allies are out of there. They can’t even get through the checkpoints to get to the airport. So this is a time where we need to have a list of our Americans. We need to make contact with where they are and we’ve got to go get them if they can’t get to the airport. I can’t believe that Biden got it so wrong that he said that no Americans were having a hard time coming to the airport. He said al Qaeda was no longer in Afghanistan. He said our allies were fine with what he did. Either the people around Biden aren’t telling him the truth or he is not thinking in a normal way. I mean, something is very wrong here. This is not about partisanship, MAJOR. This is really about America and strength and making sure we get Americans out of there alive. I’m extremely concerned about the safety of our men and women in military. I’m concerned about the safety of our Americans that are still there, and I’m concerned about the safety of our Afghan allies. You cannot trust the Taliban and you have to really deal with them in a way that they know that we’re going to hold them accountable and that we are coming at this from a moment of strength.

MAJOR GARRETT: Before we let you go, Madam Ambassador, do you understand it to be true that if President Trump had been re-elected, that he had an evacuation withdrawal plan on paper that would look fundamentally different than the Biden administration?

AMB. HALEY: Well, I think let’s be clear, the- the President Trump very much wanted to see soldiers come out of Afghanistan, so it’s not about soldiers coming out. It’s not what you do. It’s how you do it.  He would never have pulled our soldiers out without making sure Americans and all of our equipment and our weaponry was out beforehand. He would never have allowed the Taliban to take over Afghanistan without conditions. So anyone that wants to say this was already set in motion, it’s not what was going to happen. It was how it happened. And this happened in the most embarrassing, humiliating way that is- really angers soldiers like my husband and all those that- that sacrificed. It puts us in danger that you’ve got al Qaeda and the Taliban holding hands in the streets of- of Afghanistan now saying death to America and now America is much less safe.

MAJOR GARRETT: Former UN Ambassador Nikki Haley under the Trump administration. It’s been a pleasure to talk to you. Thanks so very much. And we’ll be right back with a lot more FACE THE NATION. Please stay with us.