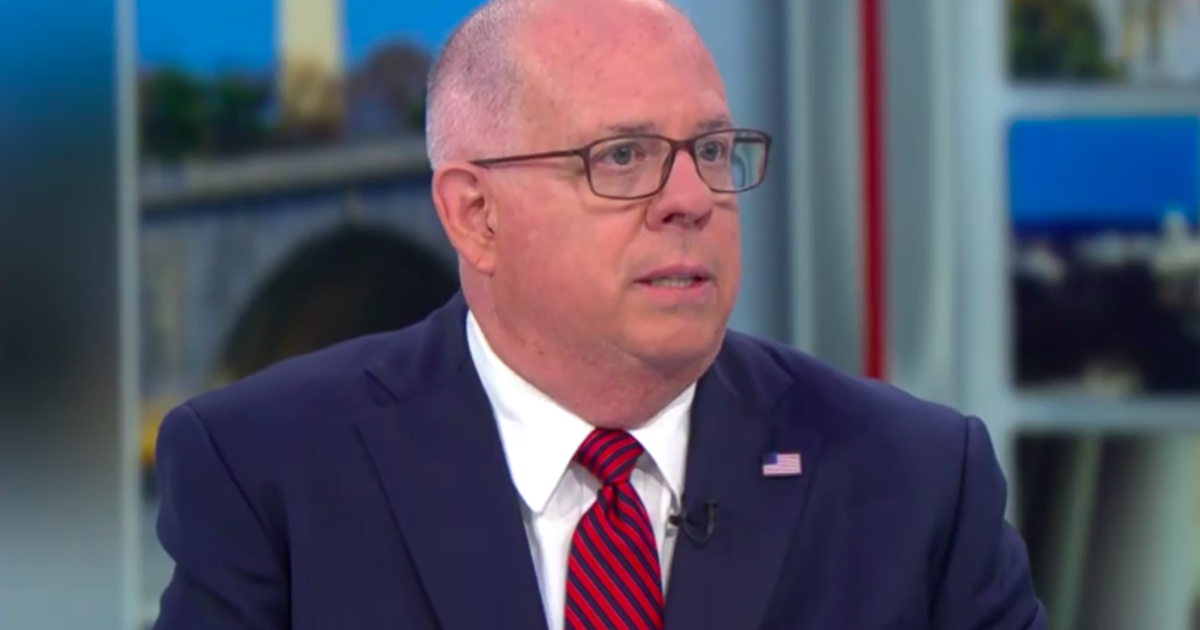 The following is a transcript of an interview with Maryland Governor Larry Hogan that aired on Sunday, August 22, 2021, on “Face the Nation.”

MAJOR GARRETT: I have a lot of COVID questions for you, but I want to get to Afghanistan real quick. Three questions there. What’s your appraisal of the Biden administration handling of the situation? How open is Maryland going to be to Afghan refugees? And what are you hearing, if anything, from State Department about how to do that?

GOV. HOGAN: Well, first of all, I think it’s an unmitigated disaster about the way we’ve handled the exit from Afghanistan, number one. Number two, we’re- I was the first governor in America to reach out and say we wanted to reach out and take more of these special immigrant visas for the folks that have been our allies that we’ve made a commitment to. We’ve got to stand by them. We’ve got to get our Americans out, and we’ve got to get those- those allies out of there as well. And we’re going to do everything we can to help do that. We have a discussion with the State Department tomorrow. We’ve already received some over the past week or two into our state and we’re going to try to get as many as we can.

MAJOR GARRETT: Is that information flow from state satisfactory to you?

GOV. HOGAN: It’s- you know, the information is a little spotty. I think some of that is understandable. But, you know, we’d like to have a little more communication.

MAJOR GARRETT: All right. To coronavirus, you said two weeks ago the pandemic is currently under control in Maryland. Is that still true?

GOV. HOGAN: Well, it’s under control better than in most other states where second lowest case rate and positivity rate in America. So, you know, we’ve got 80% of our population over 18 that’s been vaccinated. That’s one of the best in the country which is helping us keep this delta variant at bay. We’ve got ninety four percent of our vulnerable population, 65 and over. So while it is an issue, we’re very concerned about the spread of the Delta variant all across the country and it has impacted us. Our numbers are going up, but they’re going up from a very low place. We’re still better off than a lot of people and we’re better able to handle the surge than many other places.

MAJOR GARRETT: Will mandates for masks or vaccines come to Maryland under your watch?

GOV. HOGAN: Well we’ve- we’ve already taken some steps on mandating vaccines for particular groups of people. For- first of all, we started with state employees who were dealing in congregate settings, dealing with our- our nursing home retirement settings for veterans in- in places like our- our corrections facilities. And then just last week, in conjunction with the Hospital Association and the Nursing Association, we’ve mandated vaccines for workers in those two facilities that are dealing with the most vulnerable people. We- we had a mask mandate for quite some time, which was lifted back on July 1st. But we’re still strongly recommending mass for anybody who’s unvaccinated right now 100% of our hospitalizations and deaths are unvaccinated people,–

MAJOR GARRETT: But you will not reimpose that mask mandate?

GOV. HOGAN: Look, we make our decisions every day based on the best advice we can get from smart people like Dr. Scott Gottlieb is one of our advisors is on next. But right now, all of our advice is that we all just hold the course because we’re- we’re doing better than just about any other state.

MAJOR GARRETT: Some in our audience might know that you’re a cancer survivor as such if you had the booster shot.

GOV. HOGAN:: Matter of fact, I did just this week, you know, strong advice of our- of our team of epidemiologists and my own oncologist. You know, the- the federal government said that people have immune- that are immune compromised, should get it. I had a cancer of the immune system, so I got it on Monday. I’m feeling great.

MAJOR GARRETT: Do you want Marylanders to get their booster shot as soon as possible or wait this eight month interval?

GOV. HOGAN: No, we can’t wait that long. And we’ve been pushing the federal government for three things. One, we’re pushing to get the final FDA approval, which I think is part of the reluctance on the part of a lot of people. Hopefully that’s going to be coming this week. Two we’re pushing to speed up that timeframe because we want to start we’re already preparing in our state to start doing boosters for our nursing home residents and people that are in vulnerable populations. We want to get that final OK from the federal government and we want to push to get it approved for the younger kids that- that right now can’t get it.

MAJOR GARRETT: With that vaccine approval, full approval from the FDA, which is expected sometime in the coming weeks. Will that change any of your policy attitudes? Do you think it will change the mindset of Marylanders who still haven’t become vaccinated?

GOV. HOGAN: You know, we actually did surveys, and the number one reason stated for the reluctance or hesitancy to get the vaccine was that it’s not approved. So I think that’ll help. It may enable us to take further actions that we haven’t been able to because of the lack of approval, like, for instance, moving forward on on the booster shots on the third vaccine.

MAJOR GARRETT: Schools will reopen in Maryland in the coming days. Do you want those schools to conduct, as some public health officials have recommended, testing for every child once or twice a week?

GOV. HOGAN: Look, we have provided $1.2 billion dollars to our local schools just for that reason. The state has provided the resources to do testing of all of our kids. We also put money in- part of that money goes to filtration systems, HVAC systems to take care of- taking care of the air, stop the spread, slow the spread of the virus. And we’re pushing to get those kids approved so they can get their vaccine.

MAJOR GARRETT: And do you want those children to wear masks?

GOV. HOGAN: Right now, we left it up to our local school systems. About two thirds of them have already made that decision to wear masks. We think that that’s where it should be. The duly elected school boards make those decisions based on the facts on the ground in their particular area.

MAJOR GARRETT: Maryland likes its athletics. There will be football games, professional, college and high school. How should they be handling the virus?

GOV. HOGAN: Well, they’ve all been taking pretty good steps. So both the professional- we have two professional football teams, the Washington Football Team and the Baltimore Ravens, and they’ve got policies in place where they’re going to, you know, they’ve got masking inside the stadiums, outside is OK. They’re going to do some screening when you come in. And our colleges have been really strict. So the University of Maryland, the Terrapins, for example, I mean, they’ve got a-a requirement for vaccines. And I think somewhere around 90, over 90% of their student population has already been vaccinated.

MAJOR GARRETT: Governor, as I gather that you are unhappy with some of your local leaders in the distribution of federal funds dealing with evictions. Why are they not spending the money rapidly enough? And how are you leaning on them to accelerate that?

GOV. HOGAN: Well, I just got back yesterday from the Maryland Association of Counties convention where we bring all of our local leaders together. And I just stressed the point with them: we’ve provided about $100 million of state money and $400 million of federal money. We’ve- we provided assistance for people to help with rental assistance for I think–

GOV. HOGAN:  The holdup is simply that they- it’s a bureaucratic kind of process. There are some federal hoops you have to jump through. It’s not as easy as just handing out the money, but we- we’re working through that with those locals to try to make sure they get it done faster.

GOV. HOGAN: We need a little bit of both. So we got all the money out immediately to the local. Some of it went directly to the largest jurisdictions, the smaller counties. We immediately got it out to them. They’ve got to do a better job of distributing it. But we’re also going to push at the federal level to say, hey, let’s ease up some of these requirements so we can get it done.

MAJOR GARRETT: For someone who’s facing eviction, this sounds like a nightmare. Are you as mad about this situation as they likely are?

GOV. HOGAN: I’m pretty frustrated about it. And I let some of our local leaders know that yesterday. But, you know, the good news is that we’ve had 15 straight months of job growth, one of the best economic recoveries in the nation, and we don’t have as big of an eviction problem as other states, but we do want to help the people that are struggling.

MAJOR GARRETT:  A lot of topics. Governor Larry Hogan, Republican from Maryland, thanks so much for joining us.

MAJOR GARRETT: I appreciate the time. And we’ll be back in just a moment.