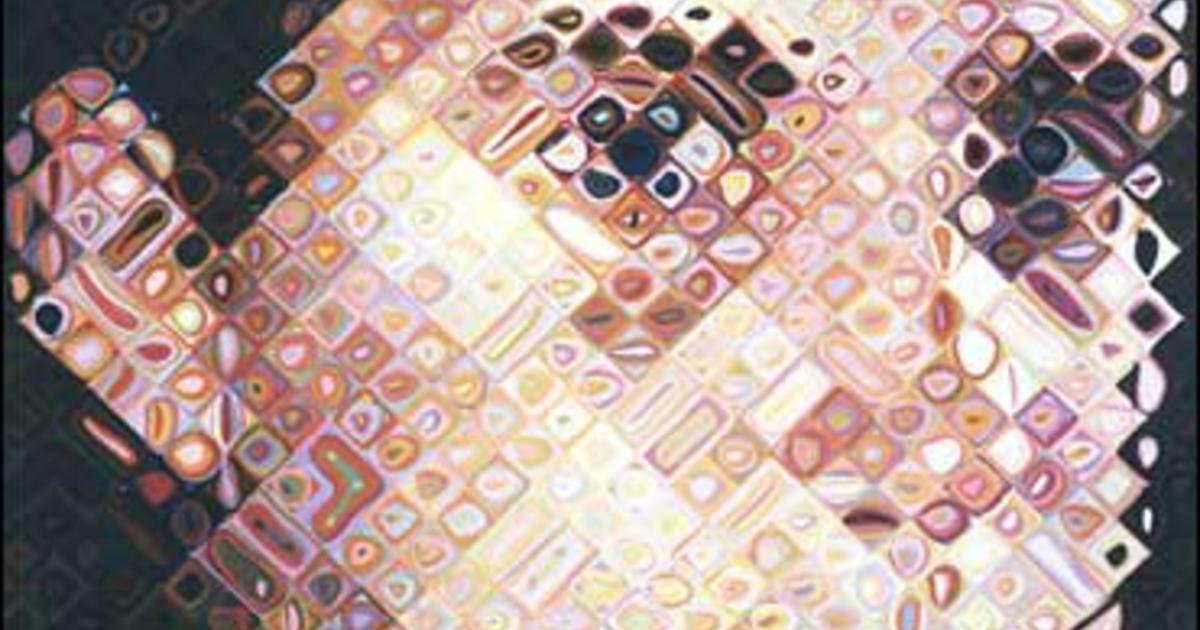 Take a step back and it becomes clear that Close is not painting a gas station. It is his daughter, Georgia.

Over four decades, Close has been re-inventing the art of portrait painting — even though for falmost two decades, he has been doing it sitting in a wheelchair.

Close, 66, is one of the most popular working artists today. A New York opening of his images in November created a crush of humanity. Last month, a traveling national exhibit of his prints arrived at the Orange County Museum of Art in California. A few days later, a retrospective of his career opened at the Queen Sophia Museum of Art in Madrid.

He begins his portraits with a photograph, which he divides into squares.

“Every square here,” Close said gesturing to a painting, “will become four squares in the painting. There is no drawing on the canvas other than the grid. I never draw a nose. I never draw a lip.”

Sunday Morning first visited Close in 1981. He was working out on an exercise bicycle in his New York studio. The visit was during his photo realism period. Close’s paintings were so real — some viewers thought they were looking at photographs. And they were also big — really big. The first painting close sold was a 9-foot picture of himself — blemishes and all.

When Sunday Morning visited Chuck Close again in 1991, the roadmap of his life had taken an unexpected turn. He could barely walk. Three years earlier at age 49, a blood clot formed in an artery leading to his spine. For weeks he couldn’t move any part of his body below his shoulders and he feared he would never paint again.

“I was scared to death,” he said. “I think I always thought I was going to make it. I was scared of living trapped in a body that didn’t work.”

His wife convinced doctors that encouraging him to paint again would help her husband recover, physically and mentally.

Today you can find Chuck Close painting in his Bridgehampton, Long Island studio or at a second studio in New York City. His ability to walk has all but vanished. A brace supports his arm. His brushes are held by a strap on his hand. And he now paints with his entire arm, not just his wrist and fingers. There are also other adjustments. He has a device that moves the easel up and down so he is always at the right height.

Despite all the changes, Close said his work hasn’t suffered, but it has changed.

“What’s changed is perhaps a slightly brighter palate,” he said. “A more celebratory nature to the work. Because I was just so happy to be able to get back to work, and to find a way to work again. The other thing is that there are so many other things that I used to love to do, that I put a lot of time and energy in doing. I used to mow the lawn, I cut the brush, and dug holes and chopped down trees and walked on the beach and roughhoused with my kids — all of this stuff that I can’t do any more. Thankfully, if I’m only gonna be able to still do something that I used to do, I’m pretty lucky that it turned out to be painting.”

His family is the center of his life — and he likes to paint them: His wife Leslie, his daughters Georgia and Maggie. He also paints his friends, including many other artists. Close says his paintings have evolved, moving away from super realism to focus more on abstract elements in the face. Close said almost always, people are not happy with how their portraits turned out.

“Almost everybody hates the way they look,” he said. “Some people immediately change the way they look: Grow a beard if they didn’t have one. Or shave it off if they did. But I would say. ‘Just wait another 10 or 15 years and you won’t mind. You won’t hate it so much.'”

Which may be why Close remains his own favorite subject.

“I never thought of them as a body of work until recently there was a retrospective of all my self portraits. And then I though, ‘Oh my God! How narcissistic! How incredibly-self involved!! And egotistical!! And even I’m tired of me.’ I don’t want to see another image of myself.”

In recent years, close has begun to focus on photography. He uses the earliest form of capturing an image: daguerreotypes.

“In my opinion photography never got better that at the very beginning,” Close said.

And the bigger the better. Last fall, corporate giant United Technologies displayed an assortment of Close’s images in a New York park.

Close’s works sells for hundreds of thousands of dollars and are shown all over the world. Twenty years after he almost died, he says he’s one of the happiest artists you’ll ever meet.