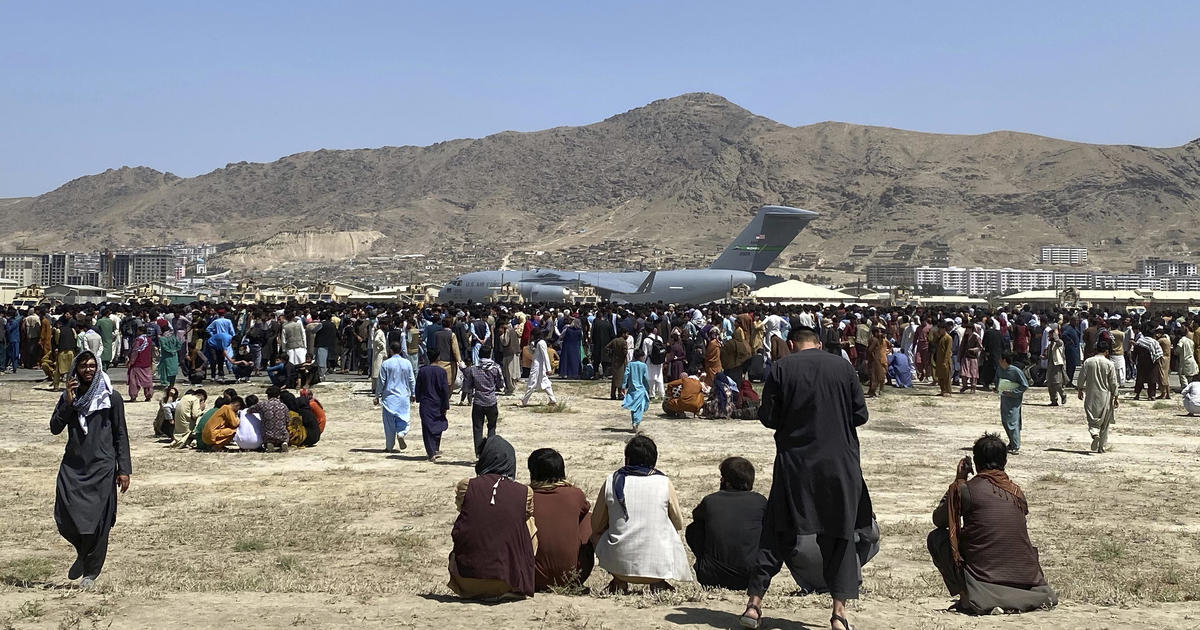 Doha, Qatar — A protest against the Taliban takeover in eastern Afghanistan ended Thursday morning with a report of several people killed after the militants opened fire, sparking a stampede. The Islamic extremists have promised not to seek revenge and to rule over an “inclusive” country, but the public statements come as the group’s militants show little tolerance for dissent or disorder, including at the U.S.-held airport vital to all evacuations from the country.

CBS News correspondent Roxana Saberi reported that the chaos of the last couple days was continuing outside Kabul’s international airport as Afghans try desperately to flee their country.

The country’s new Taliban rulers have urged Afghans not to come to the airport unless they have valid travel documents, and they’ve used violence to deter the crowds gathered outside the facility.

Inside the perimeter fence, Hamid Karzai International Airport is controlled by U.S. forces. But to get that far, even those who hold passports and an invite for evacuation first must get through checkpoint after checkpoint manned by Taliban fighters, who’ve been firing rifles and beating people back.

Inside, thousands of U.S. troops and walls of barbed wire keeping order, and military and civilian evacuation flights were taking off, with the runways clear of civilians.

U.S. military transport planes have air-lifted around 5,000 people, mostly U.S. citizens and Afghans who once worked for the U.S., out of the country. But there are around 60 to 80,000 left to get out, by President Biden’s count, and that includes more than 10,000 Americans.

Defense Secretary Lloyd Austin acknowledged on Wednesday that evacuations weren’t moving fast enough, saying it was “obvious we’re not close to where we want to be in terms of getting the numbers through.”

“We’re going to work that 24 hours a day, seven days a week, and we’re gonna get everyone that we can possibly evacuate, evacuated. And I’ll do that as long as we possibly can — until the clock runs out or we run out of capability,” Lloyd said.

“The military flights are first come, first serve,” Afghan-American Zohal Abdurahman, who lives in the U.S., told CBS News. Her brother-in-law, who used to work for the U.S. government, was heading to Kabul airport on Thursday when she lost contact with him.

“We’re really anxious to get him out of there as soon as we possibly can,” she said.

And that urgency — despite Taliban promises not to take revenge on former officials or Afghans who worked with foreign governments — may be well-founded. The New York Times reported on Thursday that an intelligence document circulated privately at the United Nations warned the Taliban was, “intensifying a search for people they believe worked with U.S. and NATO forces, including among the crowds of Afghans at Kabul’s airport.”

President Biden told ABC News on Wednesday that the chaos in Afghanistan was not the result of bad planning.

“The idea that somehow there’s a way to have gotten out without chaos ensuing, I don’t know how that happens,” said the president.

“I think they should have moved fast enough to begin with, right when President Biden announced that the U.S. was leaving,” said Abdurahman.

The U.S. will soon have 6,000 combat troops on the ground to help with evacuations. But they’ll be at the airport, where they’re needed to defend the facility and keep it running — they will not be moving around the capital or the rest of Afghanistan to find and pick up stranded Americans or vulnerable Afghans.

Abdurahman told CBS News that she wouldn’t sleep well again until the Taliban were “out of Afghanistan, for good, forever. And God knows when that’s going to be.”