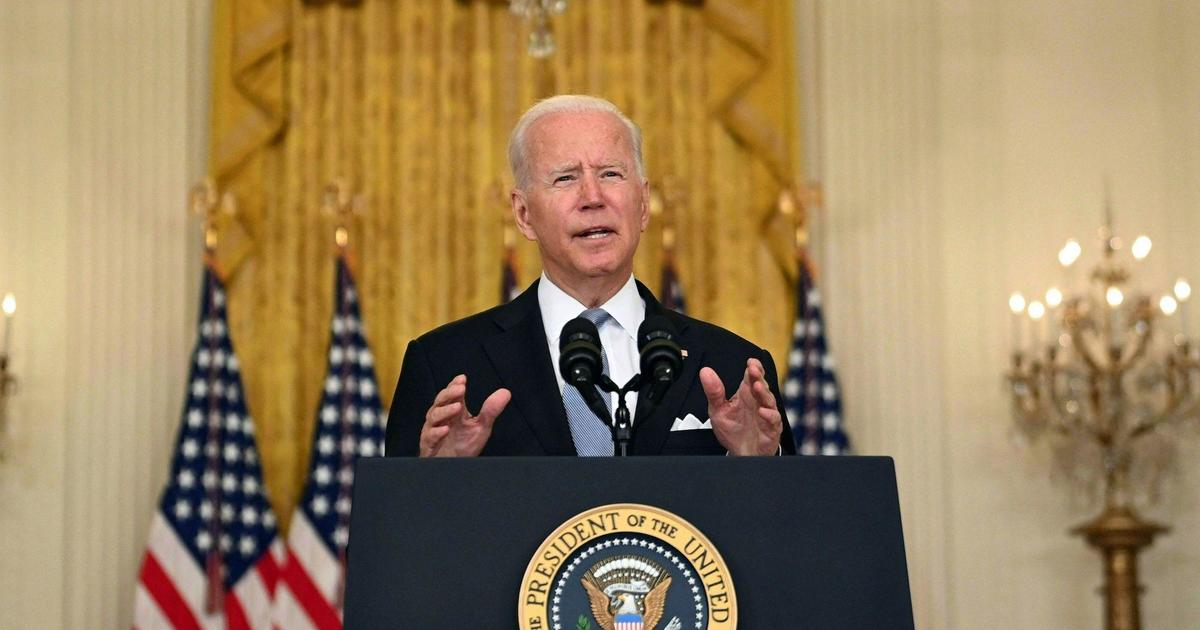 Washington — President Biden said he “stands squarely by his decision” and the “buck stops” with him Monday, addressing the nation for the first time since the government collapsed to the Taliban and amid chaotic efforts to evacuate U.S. personnel from the capital.

On Sunday, the Taliban assumed control of Kabul, the nation’s capital, and U.S. troops have been scrambling to secure the city’s airport to evacuate Americans and Afghan allies, as civilians desperately try to catch flights leaving the country.

“I stand squarely behind my decision,” the president said from the White House, defending his timeline for withdrawing U.S. troops. “After 20 years, I’ve learned the hard way that there was never a good time to withdraw U.S. forces.”

Still, even as he defended the withdrawal, the president did little to address pressing questions about why he allowed for the withdrawal to take place the way it did, and said many Afghans who aided the U.S. were not evacuated sooner because they didn’t want to leave and because the Afghan government discouraged it. He also didn’t thoroughly address why the U.S. so severely underestimated the swiftness of the Taliban takeover.

Mr. Biden said he “inherited” former President Trump’s decision to withdraw troops from Afghanistan by the end of May, and his only two choices were to follow through on that agreement or to escalate the conflict by sending thousands more U.S. troops to fight the Taliban.

Still, the president admitted, “the truth is, this did unfold more quickly than we had anticipated.” Afghan leaders gave up and fled the country, and the Afghan military gave up, he said. Afghan President Ashraf Ghani said the Afghan security forces would fight, and they did not, Mr. Biden said.

“American troops cannot and should not be fighting in a war and dying in a war that Afghan forces are not willing to fight for themselves,” the president said.

The president said he made it clear to the Taliban that “if they attack our personnel or disrupt our operation, the U.S. presence will be swift, and the response will be swift and forceful. We will defend our people with devastating force if necessary.”

The president addressed why the U.S. did not evacuate U.S. allies — Afghans who helped the U.S. — earlier. He said “some of the Afghans did not want to leave early, still hopeful for their country,” and the Afghan government “discouraged us from organizing a mass exodus to avoid triggering, as they said, a ‘crisis of confidence.'”

“I am president of the United States and the buck stops with me,” Mr. Biden said. “I am deeply saddened by the facts we now face, but I do not regret my decision to end America’s war-fighting in Afghanistan and maintain a laser-focus on our counter-terrorism mission there and in other parts of the world.”

A U.S. military official told CBS News’ David Martin that U.S. troops had killed two armed Afghans who were part of the huge crowd that breached the airport perimeter, and reports said seven people have died in total. Sources tell CBS News about 100 embassy staff are still at the airport. They are operating what remains of the embassy. Secretary of State Antony Blinken admitted on CNN Sunday that the defeat of Afghanistan forces that led to the Taliban’s takeover “happened more quickly than we anticipated,” but the Biden administration continues to stand by the president’s decision to withdraw troops.

The president has been at Camp David since Friday. While he and his aides have issued some statements and updates about the situation in Afghanistan, it will be the first time the president has addressed the topic on camera since last Tuesday. The White House says the president was briefed Monday morning by his national security team on the security situation at the airport, and ongoing efforts to evacuate Americans, U.S. Embassy personnel and local staff, special immigrant visa applicants and their families and other vulnerable Afghans.

The president has received a battlefield update and contingency planning update daily, according to a source familiar with the matter. He authorized the pre-positioning of the battalions in the theater weeks ago, in the event they would need to be deployed quickly, the source said.

In a statement Saturday, the president placed some of the blame on President Donald Trump. The former president had given a May 1 deadline for the withdrawal of U.S. forces, and Mr. Biden moved that date to the end of August.