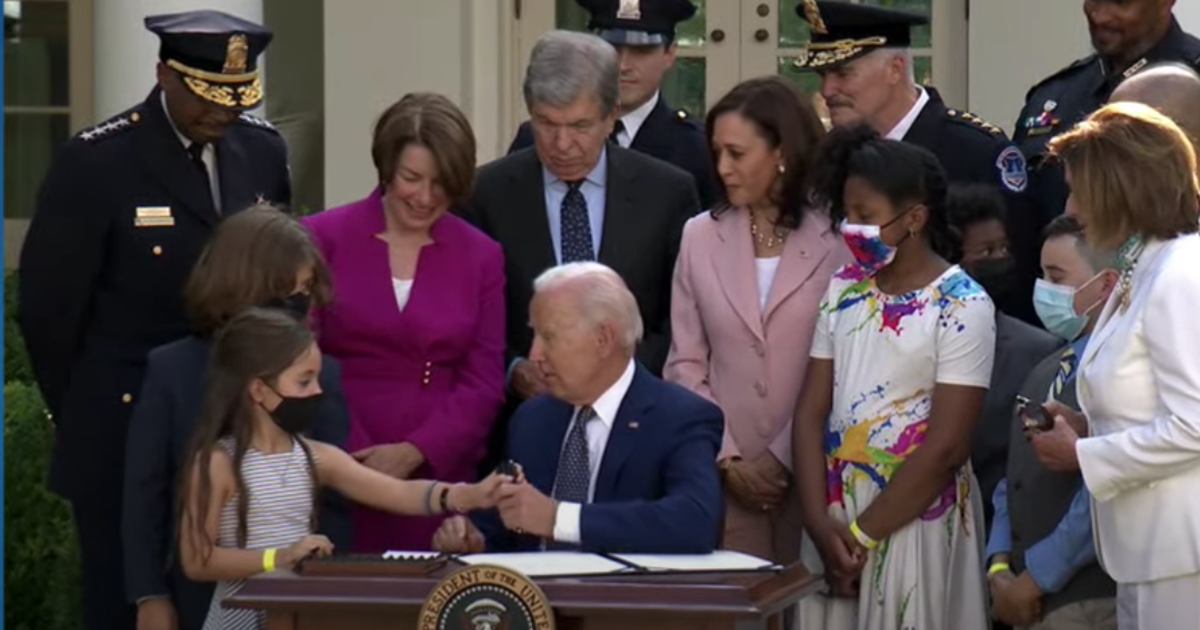 Washington — President Biden signed legislation Thursday awarding four Congressional Gold Medals to members of the U.S. Capitol Police and D.C. Metropolitan Police Department who defended the U.S. Capitol from the mob of former President Donald Trump’s supporters on January 6. Mr. Biden praised the heroism and patriotism of the officers who defended their Capitol, and he said, the Constitution.

The bill landed on Mr. Biden’s desk after the Senate cleared the measure Tuesday by unanimous consent. It passed the House in June with opposition from 21 Republicans.

“To all of them, on behalf of a grateful nation, thank you, thank you, thank you for protecting our Capitol. Maybe even more importantly, protecting our Constitution. And saving the lives of duly elected members of the Senate and the House and their staffs,” Mr. Biden said. “In these moments we’re still debating, these were tragic hours back then. You stood in the breach. You did your duty — duty to defend the Constitution of the United States against all enemies, foreign and domestic.”

The president made a point to honor the late Capitol Police officers Billy Evans and Brian Sicknick, who defended the Capitol on January 6.

“Both gave the full measure of their devotion to the country at the United States Capitol,” Mr. Biden said, recognizing their families in the audience.

Harris said the officers secured the Capitol, and “secured our democracy.” She described how she watched the events unfold with her husband, Doug Emhoff.

“What we know now is in the midst of that violent attack, there were countless acts of courage,” Harris said. “And we are here today, in the Rose Garden, at the White House, to recognize that courage. … These officers are heroes. And these officers are patriots. And they deserve, today and every day, this honor.”

The measure awards four Congressional Gold Medals in all, two of which will be displayed in the U.S. Capitol Police and Metropolitan Police Department headquarters. A third will go to the Smithsonian Institution, and the final medal will be given to the Architect of the Capitol for display in the building.

Five people died and scores of people, including more than 150 police officers, were injured in the assault on the Capitol. Members of the Capitol Police and Metropolitan Police forces recounted being dragged into the crowd of rioters, beaten and tased. Others were hit with chemical sprays and attacked with flag poles, federal prosecutors have alleged in court documents.

“It wasn’t dissent. It wasn’t debate. It wasn’t democracy. It was insurrection,” the president said of January 6. “It was riot and mayhem. It was radical and chaotic. And it was unconstitutional. And maybe most important, it was fundamentally un-American.”

More than 70 officers with the Capitol Police have left the department in the wake of the January 6 attack, while four officers from the two agencies who protected the Capitol died by apparent suicide. A fifth, Sicknick, died of natural causes one day after the Capitol assault.

To help alleviate the strain on the Capitol Police, Congress passed and Mr. Biden signed a $2.1 billion supplemental security spending package. The measure allocates $100 million to the Capitol Police, some of which is to backfill expected overtime until the agency can hire more officers. It also includes money for wellness and trauma support for Capitol Police officers.