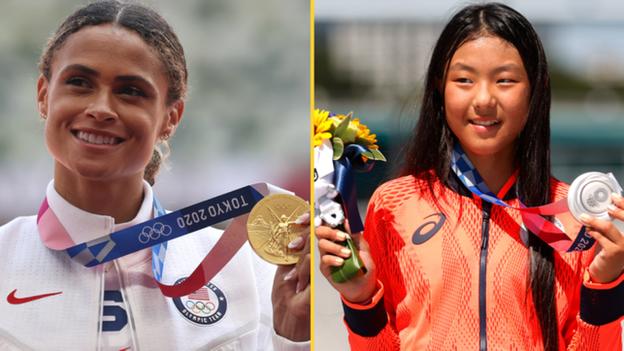 The USA’s Sydney McLaughlin smashed her own world record with a thrilling run as she took Olympic gold in the women’s 400m hurdles at the Tokyo Games.

McLaughlin, 21, stormed to victory in a time of 51.46 seconds – beating her previous best of 51.90 – to pip fellow American Dalilah Muhammad.

“I can’t really get it straight in my head yet. I’m sure I’ll process it and celebrate later,” said McLaughlin.

Brazil’s Ana Marcela Cunha, who coloured her hair in her country’s colours of blue, green and yellow, won gold in the women’s 10km marathon swimming race, while Matthew Belcher and Will Ryan of Australia took gold in the men’s 470 sailing class.

The Netherlands will play in the women’s Olympic hockey final for a fifth straight time after a convincing 5-1 win over defending champions Great Britain.

Nicknamed ‘Syd the Kid’, McLaughlin fell ill on the flight to her maiden Olympics in Rio and failed to make the final five years ago.

On Wednesday, she triumphed in one of the most the most highly anticipated races of the athletics programme in Tokyo against 2016 Olympic champion Muhammad.

Before the final, McLaughlin said of her rivalry with Muhammad: “Iron sharpens iron. People can call it whatever they want to call it; it’s two great athletes pushing each other to be better.

“There’s no animosity or hard feelings. It’s just two people trying to be their best. Dalilah is a great competitor.”

McLaughlin trailed Muhammad coming off the last hurdle but carried the momentum into the sprint to the line to cross first.

Muhammad also finished inside the old world record in 51:58 while Femke Bol of the Netherlands claimed bronze in a time of 52:03.

“I’m just grateful to be out here celebrating that extraordinary race and representing my country,” said McLaughlin. “I saw Dalilah ahead of me with one to go. I just thought, ‘run your race’.

“The race doesn’t really start until hurdle seven. I just wanted to go out there and give it everything I had.”

A podium with a combined age of 44

Skateboarding is making its Olympics debut and Japan have enjoyed great success in the sport, having won three medals in Tokyo already before Wednesday.

That tally is now five after the efforts of Yosozumi and Hiraki.

With Great Britain’s 13-year-old Sky Brown clinching bronze, the combined age on the podium was just 44.

“I hope skateboarding is going to be very popular in Japan because of the strong performances of the Japanese team,” said Yosozumi, who landed two 540s to earn the highest score of 60.09.

“Now I want to go back home and eat some delicious food.”

At the age of 12, Hiraki is used to making history.

She became the youngest female competitor at an X Games when she competed in the 2019 edition aged just 10.

Hiraki, who finished with a score of 58:05, is the world number six and won the Japanese national title earlier this year – no mean feat given athletes from Japan fill four of the top seven spots in the world rankings.

Lopez, the middleweight champion in the Rio Olympics, kept his composure throughout and put on a skilful display to win gold.

He arrived at his post-fight news conference holding his phone and smiling, mid-call to family back home.

“They were very, very happy obviously,” he said.