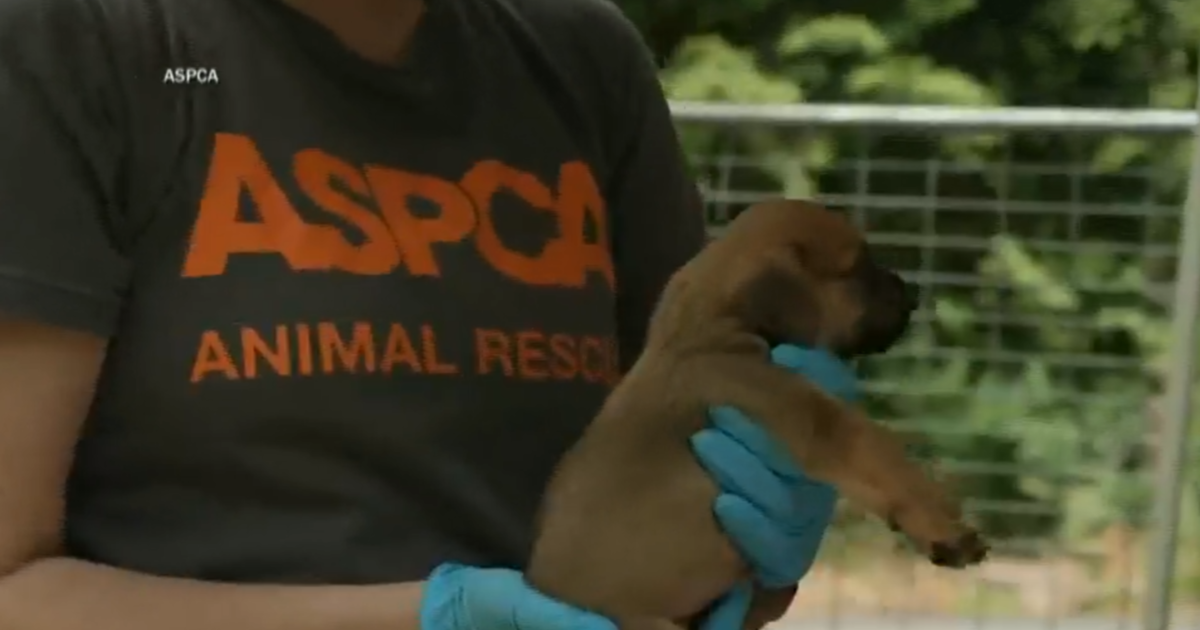 The heartbreaking commercials are almost impossible to ignore: Sarah McLachlan singing to images of suffering animals and making an urgent appeal for donations to the American Society for the Prevention of Cruelty to Animals, or ASPCA.

After those iconic commercials debuted more than a decade ago, the ASPCA’s revenues tripled — going from $85 million in 2007 to nearly $280 million in 2019 — making the ASPCA one of the nation’s leading animal welfare charities. With over 1,000 employees, the ASPCA’s mission is to rescue, protect and care for animals in need through a wide range of activities like animal relocation, advocacy, training, legislative and veterinary services. The ASPCA says the vast majority of donor dollars go directly toward its mission, but a CBS News investigation found there are questions about whether the money is going where donors expect.

Jo Sullivan was an executive vice president at the ASPCA when the commercials came out and was part of the team that created them.

“In our minds, the more money we could raise, the more animals we could help. So we were happy,” Sullivan told CBS News. “Being in a very large nonprofit now, I see the unintended consequences of having such access to such a powerful, large brand that I don’t believe any of us ever intended for that to happen at all.”

These days, Sullivan is the chief community and development officer at the Houston SPCA in Texas. Contrary to what many people might think and despite the similar names and missions, the Houston SPCA, which operates a local shelter, a veterinary clinic and an animal ambulance amongst its services, isn’t in any way affiliated with the national ASPCA. Neither is any local SPCA across the country.

“It is frustrating on this side of the table to realize that a bulk of our time and our staff time is spent trying to explain the difference between national and local,” Sullivan said. “We need our donors and the people in our community to know where their money is going.”

The ASPCA was established in 1866 by diplomat and animal welfare activist Henry Bergh in New York, where the organization still has its headquarters and offers the majority of its hands-on animal services, including sheltering, assisting with abuse investigations and spay/neuter surgeries. About 40 miles away from the ASPCA’s headquarters in Manhattan, Gary Rogers is the president of the Nassau County SPCA, a local charity that fosters animals, investigates abuse and rescues animals in danger.

“The major problems that most SPCAs have is that the ASPCA does not fund these agencies,” Rogers told CBS News chief investigative correspondent Jim Axelrod. “We receive no money from them at all.”

The ASPCA is not an umbrella organization for local organizations with SPCA in their names — a fact the ASPCA says donors know. According to its own 2017 survey, ASPCA said 84% of its donors also donated to a local animal charity. What that survey did not ask was whether donors knew the difference between giving to the ASPCA and giving to other local SPCAs nationwide.

“I would challenge the fact that 84% of people know the difference when the fundraising tactics would lead you to believe that money given to the ASPCA trickles down into local organizations,” said Patti Mercer, president and CEO of the Houston SPCA.

CBS News spoke to more than two dozen local SPCA’s across the country. A few had received grants worth a few thousand dollars from the ASPCA, which they had applied for. Most, like in Nassau County and Houston, had gotten nothing.

Since 2008, the ASPCA has raised more than $2 billion for animal welfare. In that time, it has spent $146 million, or about 7% of the total money raised, in grants to local animal welfare groups. But during that same time period it spent nearly three times that, at least $421 million, on fundraising. Over $150 million of that went to Eagle-Com Inc, a Canadian media production company, to produce and place ASPCA’s ads.

“I don’t know how they can put their head on a pillow at night,” Rogers said, “knowing that there are so many animals out here that that money could be used for other things.”

According to the nonprofit’s tax returns, the ASPCA took in nearly $280 million in 2019. The nonprofit told CBS News it spends 77 cents of every dollar on its mission to rescue, protect and care for animals in need, which, in addition to hands-on services, includes expenditures on mission-related public education and engagement.

“The devil is in the details when one looks at spending,” said Brian Mittendorf, the Fisher designated professor of accounting at The Ohio State University and a nonprofit tax expert. “If we just look at how much of the spending goes toward shelter and veterinary services, and toward grants to local humane societies, it’s hovering around 40%.”

In its commercials, the ASPCA says a $19 monthly gift could mean the difference between life and death for animals in danger. CBS News decided to look at how each $19 donation is being spent.

According to information from the organization’s 2019 tax forms, $7.75 of each $19 donation went toward hands-on help with animals across the country, and $6.88 went toward public education, communication, policy, response and engagement. This includes things that include appeals for donations like telemarketing and direct mailings. Another $3.65 went toward membership development and other kinds of fundraising. The remainder, about 75 cents, was spent on management.

In 2019, the ASPCA’s CEO Matt Bershadker made more than $840,000. That’s more than the CEO’s of Feeding America and the American Red Cross, charities that have a budget 10 times the size of the ASPCA. Bershadker declined CBS News’ request for an interview, but in response to questions posed to the nonprofit, the ASPCA’s Senior Vice President of Communications Elizabeth Estroff wrote, “the ASPCA’s CEO compensation is evaluated and benchmarked every year by an outside consultant.” She also said it is based on policies and practices that are fully consistent with IRS regulations regarding “reasonable compensation” for nonprofits.

“Personally, I don’t put too much emphasis on one person’s salary,” Mittendorf said, but there was a caveat. “If that spending pattern is something inconsistent with what donors expect, then that’s where you run into trouble, even if it’s the proper amount. If donors are giving funds to an organization expecting something different, it’s setting the stage for problems.”

CBS News found something else that donors might not be expecting. In its commercials, the ASPCA implores animal lovers saying, “We urgently need 3,000 new donors so we can rescue more animals who are still out there suffering.” But more than $28 million of the total money raised in 2019 was not reflected in spending that year. CBS News found that the ASPCA has been building up its net assets, going from just under $62 million in net assets in 2000 to over $340 million in 2019. The ASPCA says $192 million of the current net assets is properly held in reserve for 9-months operating expenses, in case of emergencies. It says the remaining $148 million is tied up in fixed assets, restricted donations and multiyear pledges.

Mittendorf says that strategy isn’t wrong, but it all comes down to expectations.

Nonprofit watchdog Charity Navigator gives the ASPCA three out of four stars overall, which is a “good” rating meaning that the charity meets or exceeds industry standards and performs as well or better than most charities in that cause. But Charity Navigator only gave the ASPCA two out of four stars for its financials based on efficiency of fundraising, the percentage of revenue spent on fundraising and the practice of selling donor lists.

While it is a common enough practice for nonprofits to sell or rent donor lists, Charity Navigator deducts points for the practice. Between 2009 and 2019, the ASPCA made more than $3.2 million selling donor lists. The ASPCA’s privacy policy states that it may share some personal information, excluding financial information, with external parties. But according to Jo Sullivan at the Houston SPCA, not everyone is granted access to the list, even if they are willing to pay.

“We were denied access to that list specifically because there is a disclaimer on our mailings that says that we do not receive any support from national nonprofits, including national SPCAs,” Sullivan said.

One way the ASPCA gets donors to add to its list is through hiring third party contractors to canvas, or solicit donations, in front of stores or in public places. According to a 2019 national contract with Ascenta Group US, each solicitor was paid $40 a day by Ascenta to solicit donations on behalf of the ASPCA. Additionally, for each monthly donor signed up by a canvasser, Ascenta Group US would receive a one-time fee of $285. The total amount a donor recruited this way who paid $19 a month would spend in the first year is $228, less than the ASPCA paid its contractor to obtain that donation.

Patti Mercer who runs the Houston SPCA says she believes that type of fundraising could be deceiving donors, when those canvassers are set up in communities, like hers, where the ASPCA doesn’t offer local services.

“The organization benefits greatly,” Mercer said of the ASPCA. “I wish that they could do some soul searching within the organization and understand that their massive efforts to draw support from around the country to support their own efforts and the issues that they wish to focus on, does hinder the ability for local organizations like ourselves to do the good work that we do.”

The ASPCA provided the following statement in response to CBS News’ questions: “For more than 155 years, the ASPCA has been steadfastly dedicated to our mission ‘to provide effective means for the prevention of cruelty to animals throughout the United States.’ All of our work, including collaborations with local animal welfare organizations, rescue groups, law enforcement agencies, policy makers, and many others, is aimed at rescuing, protecting, and caring for animals in need. The causes and effects of animal cruelty are complex, requiring us to employ a wide range of strategies to meet these multifaceted challenges. As documented in our latest available filings and audited financial statements, 77 cents of every dollar reported as an expenditure on the ASPCA’s 2019 Form 990 advances the ASPCA’s mission through lifesaving programs and services around the country. Any characterization that suggests all of our work is not in service of our mission is wrong and an injustice to our staff, donors, the organizations we partner with, and the animals we serve.”