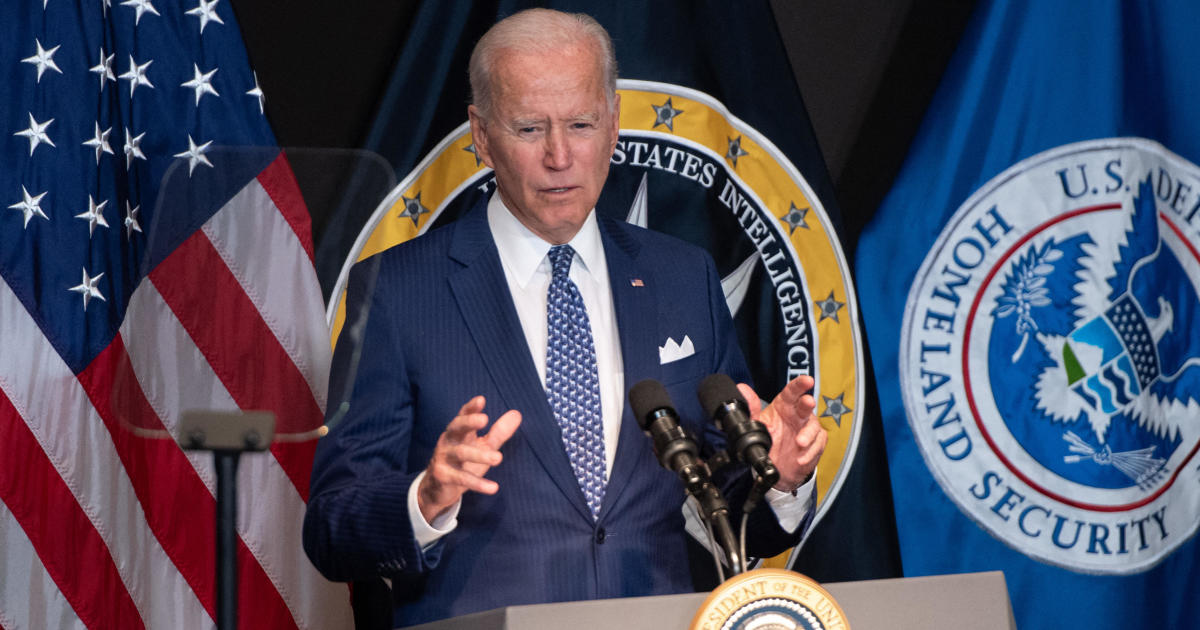 Washington — President Biden addressed members of the U.S. intelligence community during a visit on Tuesday to the Office of the Director of National Intelligence, where he also received an update on the community’s work and thanked its workforce for their efforts.

As part of his visit, Mr. Biden toured the National Counterterrorism Center Watch Floor and planned to “underscore the importance of intelligence collection and analysis that is free from political interference or pressure,” a senior administration official told CBS News.

Mr. Biden struck a tone markedly different than the one used by his predecessor, former President Donald Trump, whose relationship with the intelligence community appeared irrevocably strained from the beginning of his presidency.

Mr. Trump sparked immediate tensions when, on his first full day in office, he bragged about his appearances on magazine covers and exaggerated the size of the crowd that attended his inauguration in a rambling speech delivered in front of the CIA’s hallowed Memorial Wall, which commemorates fallen officers.

Throughout his time in office, Mr. Trump publicly questioned and often upbraided the community and its leadership for judgments that diverged from his administration’s policies, and made baseless accusations that a shadowy “Deep State” sought to undermine his presidency by linking his campaign to Russian operatives.

Mr. Biden has previously said he would demand unvarnished and apolitical intelligence from his team. His pick to lead the 18-agency community, Director of National Intelligence Avril Haines, has said she would prioritize rebuilding trust in and among the community’s ranks.

“He’s someone who believes in the role of the intelligence community, of civil servants,” White House press secretary Jen Psaki said during a press briefing on Monday. “He believes they’re the backbone of our government, and certainly he’ll make that clear.”

While Mr. Biden has insisted on receiving intelligence free of politics, he has nonetheless charged the community with what have become high-profile and politically charged pursuits.

In May, Mr. Biden asked agencies to “redouble” their efforts to investigate the origins of the COVID-19 pandemic, setting a deadline of 90 days for them to “collect and analyze information that could bring us closer to a definitive conclusion.”

The intelligence community has been, for well over a year, weighing two possible scenarios — human contact with an infected animal or a lab accident. Administration and intelligence officials have said two intelligence agencies lean toward one scenario, and one toward the other.

Both Haines and CIA Director William Burns have already said publicly it was possible the intelligence community would never arrive at a definitive answer.

Intelligence agencies are also focused on determining the cause of a mysterious illness known colloquially as “Havana Syndrome,” which has sickened at least 100 intelligence officers and family members since 2016. A total of 200 American officers, including diplomats and military personnel, are thought to have been affected, and lawmakers of both parties have demanded more answers on the incidents’ origin.

While intelligence officials have said they have reached no conclusion about what causes the illness — including whether it might be the work of a foreign actor — one prevalent theory is that the cases are the result of attempted intelligence collection by Russian government operatives.

The community is also grappling with what amounts to a seismic shift in its mandate and principal areas of focus, which have in recent years edged away from counterterrorism and toward broader, more amorphous challenges, including climate change, disease outbreaks and geopolitical instability.

Leaders have also consistently said the paramount challenge for U.S. national security will be competition with Beijing, which Burns has said the CIA would confront with “intensified focus and energy.”