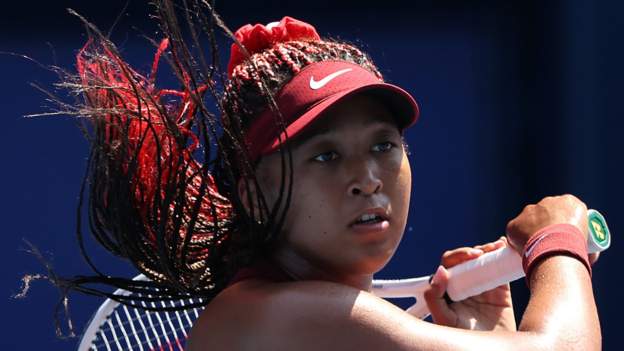 A “refreshed” Naomi Osaka says it was “nerve-wracking” to compete in the Olympics in her home country of Japan after her first-round singles win over Zheng Saisai in Tokyo.

She took an eight-week break prior to the Games beginning.

“I feel definitely a little bit refreshed and happy again,” she said.

Osaka was threatened with expulsion from the French Open for not participating in post-match media conferences and ultimately withdrew after her first-round match.

Speaking to the media for the first time since Roland Garros, she said: “Playing the Olympics has been a dream of mine since I was a kid, so I feel like the break I took was very [much] needed.

“I feel like, more than anything, I’m just focused on playing tennis.”

Osaka is one of the faces of the Tokyo Games and lit the Olympic torch in Friday’s opening ceremony.

She put in a strong performance to beat Zheng 6-1 6-4 and set up a second-round match with Viktorija Golubic of Switzerland.

“I felt really nervous being in Japan, and playing here for the first time in maybe two years, and for it to be my first Olympics,” added Osaka.

“It was definitely really nerve-wracking. But I am glad I was able to win.”