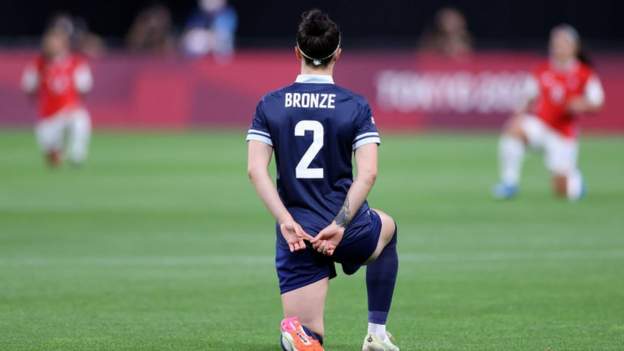 Great Britain women’s football team began the Tokyo 2020 Olympic Games by taking the knee before their opening match against Chile.

The team announced last week their intention to take the knee before every football match in Japan.

Rules around athletes protesting at Tokyo 2020 were relaxed by the International Olympic Committee.

Chile’s players responded by taking the knee in the Sapporo Dome, where the game was played without fans.

Team GB captain Steph Houghton said after their 2-0 victory: “Taking the knee was something we spoke about as a group. We feel so strongly and we want to show we’re united.

“We want to fight all forms of discrimination and as a group of women we wanted to kneel against it.”

The women’s football side were the first athletes to represent Team GB at the Games and they got off to the perfect start as two goals from Manchester City striker Ellen White sealed a comfortable victory.

They next take on Japan in their second group match on Saturday, 24 July.

Players in the women’s and men’s game have been taking the knee to highlight racial injustice.

Goalkeeper Carly Telford said last week that Team GB hoped it would encourage others to do the same.

Following the murder of George Floyd in May 2020, players and officials in the Premier League and English Football League began taking the knee before matches to highlight racial inequality and discrimination.

The Games began amid widespread opposition in Japan, with Covid-19 cases rising and fans absent from the event.

Dr Tedros Adhanom Ghebreyesus, head of the World Health Organization (WHO), has backed the staging of the Games despite Chilean taekwondo athlete Fernanda Aguirre becoming the first Olympian to be ruled out of action after testing positive.

Elsewhere, hosts Japan opened the Games with a convincing 8-1 win over Australia in the softball group stage in Fukushima.

The match took place in an empty Azuma Baseball Stadium, with softball returning to the Olympic programme after a 13-year absence.

Team Japan’s determination to retain their 2008 title was evident, with Minori Naito, Yamato Fujita and Yu Yamamoto all clearing the fence with home runs.