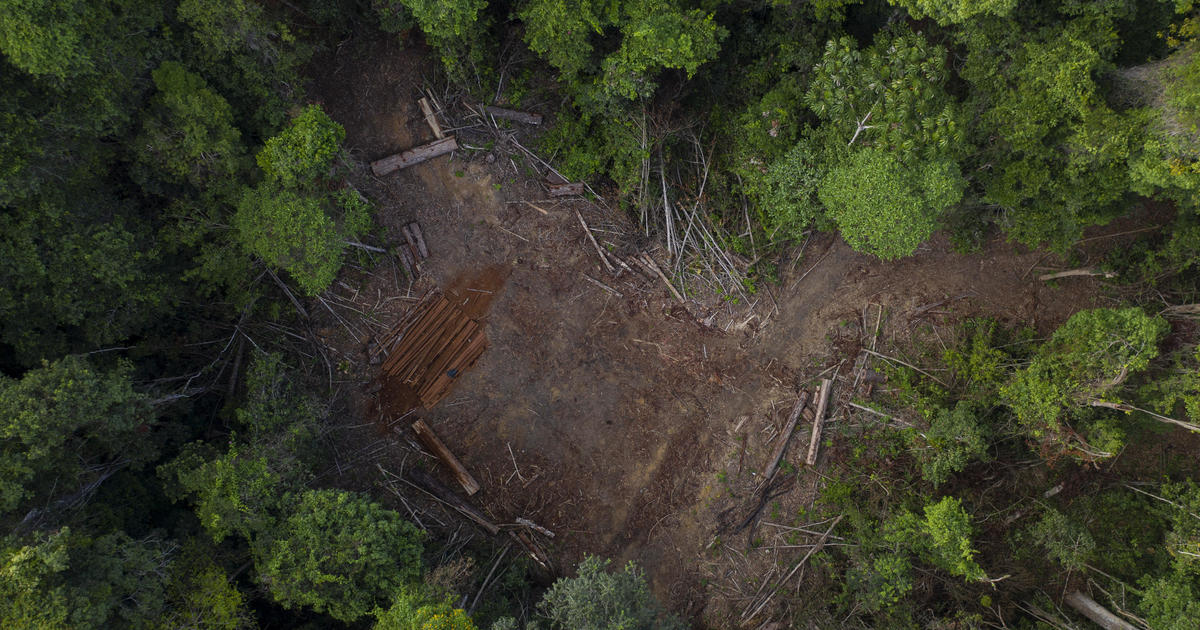 The Amazon rainforest has played a critical role in the fight against climate change by absorbing carbon dioxide that would otherwise be released into the atmosphere. But a study published in Nature on Wednesday found that humans are threatening its ability to do so — which could have devastating consequences for the planet.

The Amazon basin is roughly 80% to 90% of the size of the continental U.S. and contains 2.8 million square miles of jungle, which is more than half of Earth’s remaining tropical rainforests, according to the National Oceanic and Atmospheric Administration, which helped support the research. The region stores roughly 123 billion tons of carbon in trees and in the soil.

“Roughly half of the CO2 that we’ve emitted from fossil fuels has been absorbed by either the oceans or the land — and that’s roughly a 50-50 split,” John Miller, one of the study’s lead authors, told CBS News. “So there’s this huge climate mitigation service that we’re getting for free, and global warming would be much worse if trees were not taking this up.”

The Amazon has long been known as a “carbon sink” — something that absorbs more carbon from the atmosphere than it releases — but studies were beginning to show that the forest was losing its ability to retain the carbon. Miller and other scientists embarked on a nine-year study to find out why. From 2010 to 2018, they analyzed four areas of the jungle: the northwest, northeast, southwest and southeast.

The region, also known as Amazonia, is known for its ability to store massive amounts of water in its soil and vegetation. This water storage makes its way into the atmosphere and then fuels rainfall, keeping vegetation and the forests healthy. But deforestation and global warming have impacted some of the rainforest’s ecosystem, making the dry seasons longer and the area more susceptible to fires.

In northwest Amazonia, where the climate is wet almost year-round and vegetation rarely varies throughout the year, researchers found that the area was near carbon balance, meaning that it absorbed roughly as much carbon as it released. But the farther southeast researchers observed, the more disrupted that balance became.

While Amazonia’s southeastern and northeastern regions — which have experienced higher rates of deforestation and warming — are carbon balanced during the wet season, when the dry season comes, the forests release far more carbon than they previously had, researchers said.

“Eastern Amazon sites have warmed by as much as about 0.6 Degrees Celsius per decade during the dry season over the past 40 years,” a Nature news release about the study says. “This is more than three times the rate of global warming and about the same rate as for the Arctic.”

In total, the researchers found that the southeastern region, which is about 20% of the total area, was emitting more carbon dioxide than it was absorbing, meaning that it was no longer a carbon sink.

“The more deforested and climate-stressed eastern Amazon, especially the southeast, was a net emitter of CO2 to the atmosphere, especially as a result of fires,” Miller said in a NOAA news release. “On the other hand, the wetter, more intact western and central Amazon, was neither a carbon sink nor source of atmospheric CO2, with the absorption by healthy forests balancing the emissions from fires.”

The study comes as carbon dioxide levels have reached their highest point in 3.6 million years, according to the National Oceanic and Atmospheric Administration. One NOAA scientist predicted that if the pandemic had not hit, 2020 would have been a record-breaking year in global emissions.

If current trends continue, scientists believe the amount of carbon dioxide will be twice as high as pre-industrial levels in roughly 55 years, when today’s children are preparing to retire.

In March, non-governmental organization Rainforest Foundation Norway released a study saying that humans have caused the rapid decline of Earth’s tropical rainforests, with 34% now “completely gone.” Global use of coal, farming, soy, palm oil and mining is quickly degrading the forests that are left are being put “closer to a tipping point,” the report said.

With Amazonia’s ability to maintain its status as a carbon sink at stake, the research indicates that tropical forests may lose their ability to absorb carbon dioxide from fossil fuel emissions in the future.

“There are certain parts of the Amazon, such as the southeast, you could go into a tipping point, where the ecosystem that would be best matched with that rainfall and temperature conditions would actually be a savannah as opposed to a tropical rainforest,” Miller said.

Miller explained that it’s “very hard to come back from” the loss of the forests in the short term — which in this regard could be “hundreds of years.” And even if the forest could recover in 100 years, the climate itself could be different, meaning that the forest’s role in handling carbon would be unclear.

“It’s a really big warning that we’re seeing happening over a really pretty significant area. And if we don’t take steps now to try and adjust our policies on both deforestation and emissions reduction from fossil fuel burning, things are going to get worse,” he added. “We’re going to be in more trouble. Because that’s what got us here in the first place.”