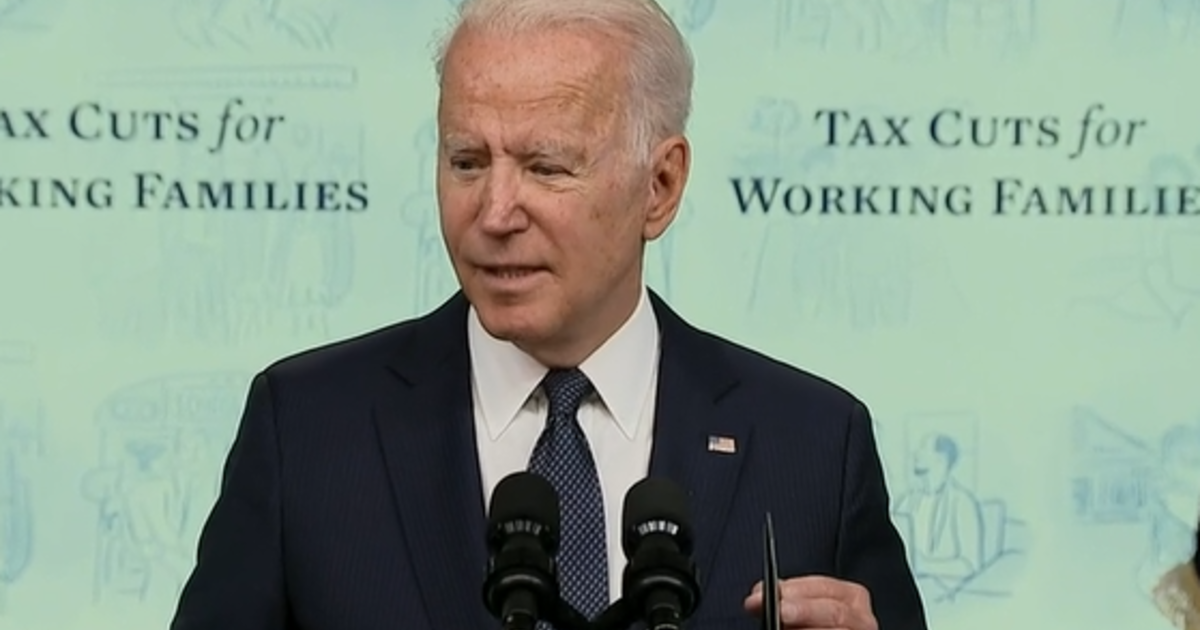 President Biden hailed the moment as historic as the families of nearly 60 million children are receiving roughly $15 billion in the first monthly payments of the advanced Child Tax Credit. President Biden and Democratic lawmakers hope the money, part of the latest round of COVID-19 pandemic relief passed earlier this year, is just the beginning.

The American Rescue Plan, which was signed into law in March, expanded the Child Tax Credit to $3,600 per child younger than six and $3,000 per child ages six to 17. It also made the tax credit fully refundable and advanced half of it to families as monthly installments.

“This can be life-changing for so many families,” Mr. Biden said. He argued the expanded monthly Child Tax Credit has the ability to cut poverty in the way Social Security reduced poverty among the elderly. He claimed the expanded Child Tax Credit will be one of the things he and Vice President Kamala Harris will be most proud of when their time in office is up.

Harris called Thursday “the day the American family got so much stronger.” She said while the payments might be monthly, the impact will be generational.

“For the first time in our nation’s history, American working families are receiving monthly tax relief payments to help pay for essentials like doctor’s visits, school supplies, and groceries,” Treasury Secretary Janet Yellen said in a statement. “This major middle-class tax relief and step in reducing child poverty is a remarkable economic victory for America – and also a moral one.”

About 86% of families receiving payments are getting them via direct deposit. The remainder will receive checks in the mail, the Treasury Department said.

Policy experts say the move will slash the child poverty rate in the United States nearly in half, with an even greater impact for Black and Hispanic children. Before changes were made under the American Rescue Plan, lower income families often received a smaller Child Tax Credit than families with higher earnings because the tax credit was only partially refundable. The families of more than 26 million children who previously would have not received the full Child Tax Credit because their incomes were too low under the old rules will now receive the full credit.

“It’s the most progressive change to America’s tax code ever,” said Senator Michael Bennet of Colorado on Wednesday. He introduced a plan to overhaul the Child Tax Credit and deliver payments on a monthly basis in the Senate back in 2017. “It’s the single biggest blow to child poverty in American history.”

Democrats — some of whom, like Connecticut Representative Rosa DeLauro, have long advocated similar policies — are pushing to extend the monthly Child Tax Credit payments beyond 2021. As part of his proposed American Families Plan, Biden has called for the monthly payments to be extended through the end of 2025.

“To the people who say we can’t afford to give the middle class a break, I say we can afford it, by making people at the top and the big corporations, over 50 of which paid no taxes last year at all, to finally just start paying their fair share,” Biden said.

While members of the Senate hash out a bipartisan infrastructure deal, Democrats are also preparing to use the so-called reconciliation process that allows them to pass other components of the Biden agenda without needing 60 votes in the Senate. The increased monthly Child Tax Credit payments would be part of that $3.5 trillion budget resolution. Discussions on how long to extend it are ongoing, but Senator Ron Wyden of Oregon, whose Senate Finance Committee would be responsible for drafting it, has said his goal is as long of an extension as possible.

“It will be extended for sure for a very significant amount of time, and we will see if we can get the permanence that we are fighting for,” Senate Majority Leader Chuck Schumer of New York said at a press conference last week on the matter. He reiterated his call to make the expanded tax credit a permanent part of the tax code Monday on the Senate floor.

Some Republican lawmakers have proposed their own monthly payments for children, but none are expected to get on board with the Democratic version being passed as part of a reconciliation package. No Republicans voted for the American Rescue Plan, which included the temporary increased Child Tax Credit.

Children advocacy groups are also pushing to make the expansion permanent — arguing it cannot be left up to future lawmakers to ensure the benefits going to millions of families continue.

“We talk a lot about potentially cutting child poverty in half, but if you just flip your perspective on that, allowing this program to expire in some future year is akin to basically allowing a doubling of the child poverty rate when this policy goes away,” said Zach Tilly of the Children’s Defense Fund.

In the meantime, lawmakers, advocacy groups and the Biden administration have been working to bring awareness to the monthly payments and make sure low income Americans who have not to file taxes are in the tax system to receive the payments.

The first payments automatically included families that signed up for stimulus checks last year, even if they do not normally file tax returns because of their low incomes. As a result, the families of more than 720,000 children who would not otherwise have received a Child Tax Credit will now receive payments starting this month, the Treasury Department estimates.

And outreach continues. The IRS over the weekend held a series of events in 12 cities across the country over the weekend to help people who don’t normally file taxes to get the payments and set up a series of online tools to help non-tax filers eligible for the child tax credits sign up to receive payments as well as check their eligibility for payments. Even if families sign up late for the Child Tax Credit payments, they will still receive the full amount of advanced payments by the end of the year, a senior administration official said.

On Monday, the IRS expanded some of its child tax credit material to Spanish and other languages to help reach eligible families. Other groups have launched a series of public awareness campaigns on multiple platforms.

To receive the full amount, eligible families include single parent head of household filers making up to $112,500 and married couples who file jointly with a combined income up to $150,000 per year.