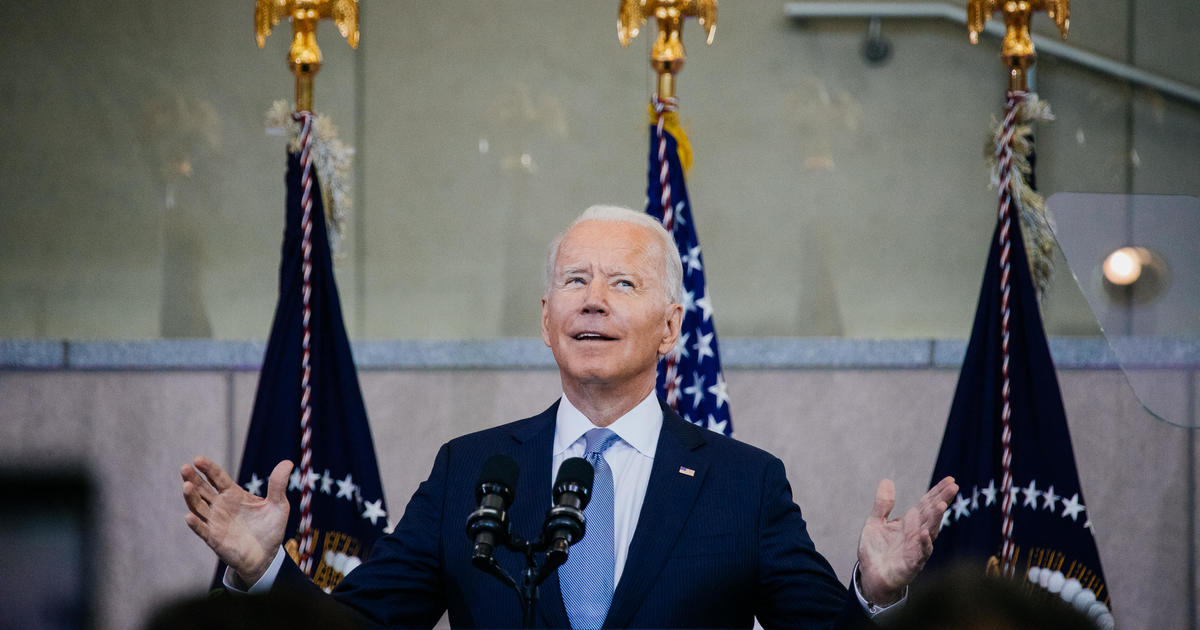 Washington — President Biden is traveling to Capitol Hill on Wednesday for a meeting with Senate Democrats to discuss dual infrastructure proposals wending their way through the Senate, including a $3.5 trillion deal that was announced on Tuesday night.

Senate Majority Leader Chuck Schumer said after a lengthy meeting on Tuesday that Democrats on the Senate Budget Committee had reached an agreement on the bill. The measure will include Mr. Biden’s “human” infrastructure priorities not covered by a bipartisan proposal, such as child care, health care, education and additional provisions related to climate change. Democrats will attempt to pass the measure in the Senate through reconciliation, a process that will allow the legislation to be approved without any Republican votes.

“We are very proud of this plan. We know we have a long road to go. We’re going to get this done for the sake of making average Americans’ lives a whole lot better,” Schumer told reporters on Tuesday. The bill will also include an expansion of Medicare benefits to cover dental, hearing and vision, and contain a provision expanding the child tax cuts established by the American Rescue Plan.

Mr. Biden will huddle with senators at the Democratic caucus luncheon on Wednesday before meeting this afternoon with a bipartisan group of mayors and governors to tout the infrastructure proposals.

As this larger bill is unlikely to garner any Republican votes, it must receive support from all 50 Democrats, meaning that it will need support from both ideological ends of the party. Senator Mark Warner, considered the most moderate Democrat on the Budget Committee, backed the $3.5 trillion deal on Tuesday night. However, it is not clear whether it will be embraced by other moderates in the party such as Senator Joe Manchin.

Warner told reporters that the reconciliation bill will be fully paid for, a priority for Manchin, who has insisted that any new infrastructure legislation must be completely funded. The pay-fors may include raising income tax rates for the wealthiest Americans and raising the minimum corporate tax rate, ideas which Mr. Biden had previously suggested as methods to fund large infrastructure spending, but do not have any Republican support.

The bill must also maintain support from progressives in the party in order to pass, meaning that it is unlikely the price tag can go any lower. Budget Committee Chair Bernie Sanders, who had previously supported a $6 trillion reconciliation bill, threw his support behind the $3.5 trillion deal on Tuesday, calling it “the most significant piece of legislation passed since the Great Depression.”

Democrats have a limited amount of time to move forward with this bill and the bipartisan infrastructure proposal before lawmakers leave Washington for the August recess. Democratic senators must complete crafting a budget resolution, which will lay out instructions for passing the bill through reconciliation. Schumer has also said that he would like to bring the bipartisan deal to the Senate floor by the week of July 19, but it’s unclear whether the language of the bill will be finalized by then.

But GOP Senator Rob Portman told reporters on Wednesday that the two bills are unrelated, and Republicans are continuing to work to find agreement on the bipartisan package.

“I think it’s a real mistake what they’re doing, but it doesn’t affect us at all and we are in a totally separate track,” Portman said.

The bipartisan bill will need support from 10 Republicans along with all 50 Democrats to advance, and while 11 Republicans had previously suggested they would vote for the bipartisan proposal, some of them now seem to be getting cold feet. These concerns may be exacerbated by an assessment from the Congressional Budget Office, which is expected to reveal how much the bill will actually cost — and whether the pay-fors suggested by senators would really cover the price.