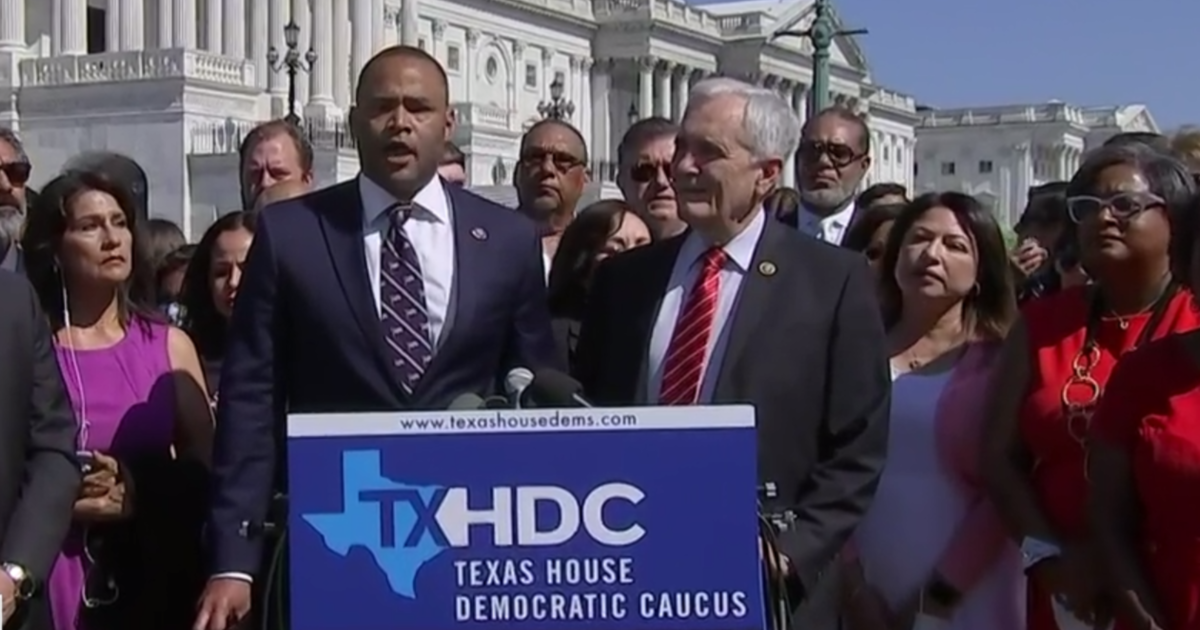 Washington — The Texas Democratic lawmakers who fled the state for Washington, D.C., to block a vote on a GOP-backed voting and elections bill called on Congress to pass federal voting rights protections and said they were prepared to continue their stand-off with Republicans.

Appearing with members of Texas’ federal congressional delegation outside the U.S. Capitol, the lawmakers urged Congress to pass the For the People Act, a sweeping federal elections bill, and the John Lewis Voting Rights Act, which is aimed at shoring up a key provision of the Voting Rights Act.

More than 50 Democratic lawmakers from the Texas House of Representatives left on Monday to prevent a quorum during the special legislative session that is being held because they scuttled the May legislative session —  also by leaving — to block the elections bill.

“We are here in D.C., our nation’s capital, because we want to protect the civil right to vote for millions of Texans. We were quite literally forced to move and leave the state of Texas. We also know that we are living right now on borrowed time in Texas, and we can’t stay here indefinitely to run out the clock, to stop Republican anti-voter bills. That’s why we need Congress to act now, and pass the For The People Act,” state Representative Rhetta Bowers said. “Texas Democrats will use everything in our power to fight back, but we need Congress to act now.”

Two main election bills are under consideration in the Texas House and Senate. Both measures would eliminate drive-thru and 24-hour early voting, expand early voting hours to some medium-sized counties, add identification requirements for voting by mail, increase criminal penalties for some election officials who don’t follow regulations and give more powers to poll watchers.

Chris Turner, the chair of the Texas House Democratic Caucus, said at least 57 members of the 150-member Texas House had instructed the body’s clerk to lock their voting machines inside the chamber, effectively denying Republicans of the 100-member quorum needed to hold a vote. He said Democrats were prepared to remain outside Texas until the conclusion of the special legislative session.

“Our intent is to stay out and kill this bill this session, and use the intervening time — I think 24, 25 days now before the end of this session — to implore the folks in this building behind us to pass federal voting rights legislation to protect voters in Texas and across the country,” Turner said, pointing to the Capitol.

The decision to leave the state echoes a move by Democratic lawmakers in 2003 who fled to Oklahoma during a fight over redistricting. Leaving the state prevents law enforcement officials from rounding up lawmakers and forcing them to go back to work. But even if Democrats remain out of the state for the rest of the special session, Abbott, the governor, can call additional special sessions to tackle his legislative priorities, which he has said he will do.

In an interview with Texas radio station KFYO Tuesday morning, Abbott said any Democrats who left the state should be stripped of their leadership positions. He also doubled down on his recent decision to veto funding for the state legislature. That funding, which includes pay for staff, is set to run out on September 1 and Abbott said Democrats are jeopardizing restoring the money by walking out. Democrats have challenged that veto in the Texas Supreme Court.