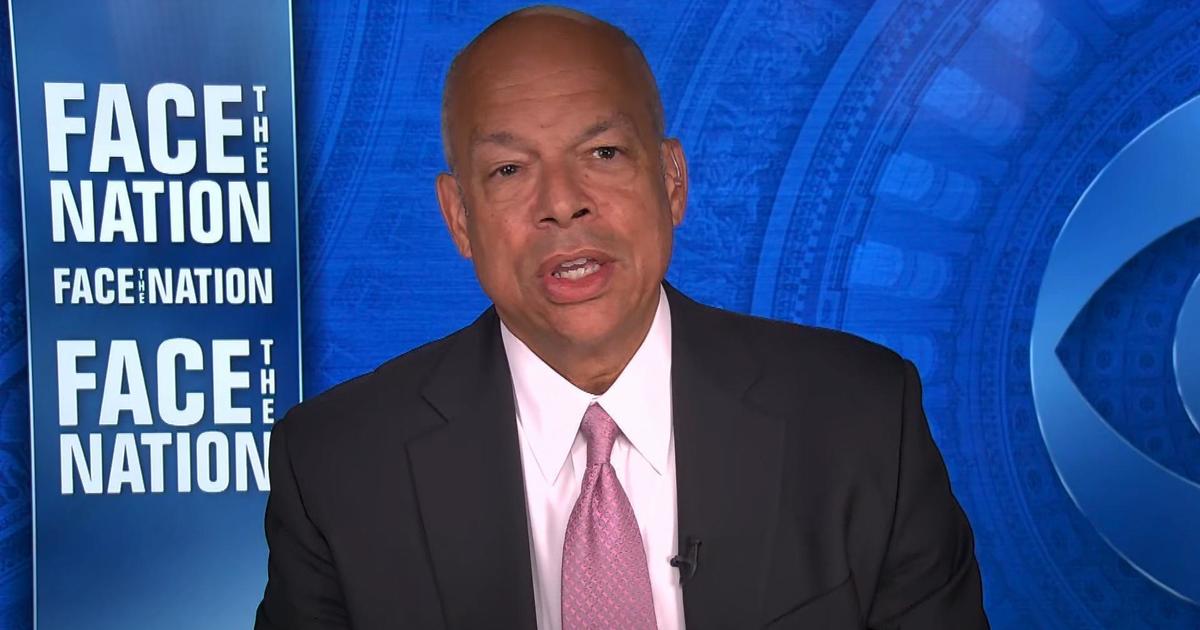 The following is a transcript of an interview with former Homeland Security Secretary Jeh Johnson that aired on Sunday, July 11, 2021, on “Face the Nation.”

FORMER  DEPARTMENT OF HOMELAND SECURITY SECRETARY JEH JOHNSON: Good morning, JOHN, thanks for having me.

JOHN DICKERSON: Mr. Secretary, let’s start with Afghanistan. You were the secretary of the Department of Homeland Security, which was created after a terrorist attack that was born in Afghanistan. Give me your assessment of the situation there now. And if it still has the possibility to harbor terrorism in the way that people worried about 20 years ago.

FMR. SEC. JOHNSON: Well, in many respects, much has changed in Afghanistan and much has stayed the same. I went to Bagram Air Base for the first time in 2009 when I was general counsel of the Department of Defense, and I recall a missile attack on the base. The night I arrived, a missile landed about 500 feet from where I put my head on the pillow. The mission in Afghanistan was, is and should be preventing another terrorist organization from establishing a caliphate in Afghanistan with the ability to launch a large scale attack on our nation like a 9/11. We have, to a very large degree, achieved that over the last 20 years. President Biden asked, when are we leaving? If not now, when? If I were advising the president, I probably would have recommended that we keep in place- in-country highly trained force of about 2,500 or so for counterterrorism purposes. The president, I know, understands the stakes. He’s heard it before eight years as vice president and has decided, along with the support of most Americans, apparently, that it is simply time to get out. We will, it seems, maintain a quick response force on the borders on the outskirts of Afghanistan in the event we see that a terrorist organization is beginning to plant another foot there.

JOHN DICKERSON: How much better has the US gotten in 20 years in that kind of quick response and in hardening targets to terrorists? Things have changed a great deal in terms of our capabilities in 20 years to react if something does go sideways in Afghanistan.

FMR. SEC. JOHNSON: Good question. Just since the time I’ve been in national security, beginning in the early years of the Obama administration, I’ve seen our capabilities grow enormously. The accuracy of our targeting, the sophistication of our intelligence collection capabilities has grown enormously just over the last 12 years. I have a lot of confidence in our ability to do that and to monitor threats from beyond Afghanistan. So I do take some comfort in where we are today, even though we will no longer have a troop presence there in Afghanistan.

JOHN DICKERSON: President Biden said, and I’m going to switch topics now. He said that one of the reasons to remove focus on Afghanistan was that-that he and national security has to focus on the world of today, not the world of 20 years ago. The world of today is a world of cyber conflict. And I want to rely on your experience as Secretary of Homeland Security, but also as general counsel to the Pentagon. How do you define in this murky new world what an act of war is, what conflict looks like? How should we think about this?

FMR. SEC. JOHNSON: Good question, you have to look at it in four categories. One is basic surveillance, traditional spying, and though we could not minimize it, there is an aspect of all’s fair among thieves. And when you’re dealing with surveillance, reconnaissance and spying, there is theft, theft of intellectual property by private enterprise overseas and very often by the government. The Chinese government, for example, engages in theft of our intellectual property here in this country. And then there is an offensive cyber attack for purposes of degrading or destroying capability, most notably in critical infrastructure. And from a national security perspective, that’s what we most worry about. And then there’s ransomware, the the encryption or theft of a private businesses data for purposes of collecting a fee for returning it. It is prevalent. It is growing. They are devilishly clever by implanting malware, for example, in the software used to promote cybersecurity. And so this obviously is a big priority right now for the administration. And I’m quite sure that they’re weighing a number of options on how to deal with it. I’m sure President Biden is thinking now I’m six months into my presidency and this is a test for me. And he’s drawing- he’s drawing a very public red line with Vladimir Putin and that government. And I’m sure they’re weighing the options about what to do right now. We cannot afford to do nothing—

JOHN DICKERSON: Let me ask you about that-that redline that the President drew, because it makes those categories you drew murky. He has told Vladimir Putin that he knows these ransomware attacks are coming from within Russia and he will essentially hold the Putin government responsible for that. So you’ve been in- the in the national security meetings in the Situation Room. The president had a National Security meeting this week on this and he talked with President Putin. Give us a sense of what you think some of the options are he’s considering as he manages this murky world.

FMR. SEC. JOHNSON: My educated speculation is that they’re probably presenting to the president a diplomatic option, expelling diplomats, they’re probably presenting to the president an economic option, the Treasury Department sanctioning additional Russian officials. And they’re probably presenting to the president something in the nature of a military option through some combination of U.S. Cyber Command and NSA, our intelligence community. They may be weighing an option of a-a cyber response proportionate in nature to degrade the capability of those in Russia to engage in this attack. From the public rhetoric, it seems as if President Biden and his administration has accepted that it’s not the Russian government itself, but that the Russian government seems to be harboring this threat. And under principles of international law, one can act in self-defense if the host nation is unwilling or unable to deal with the threat itself. That was the international legal basis for us going into Pakistan to get Osama bin Laden, for example, 10 years ago.

JOHN DICKERSON: All right, Secretary Johnson, thank you so much for being with us. We appreciate your help on this issue. And we’ll be right back in a moment.