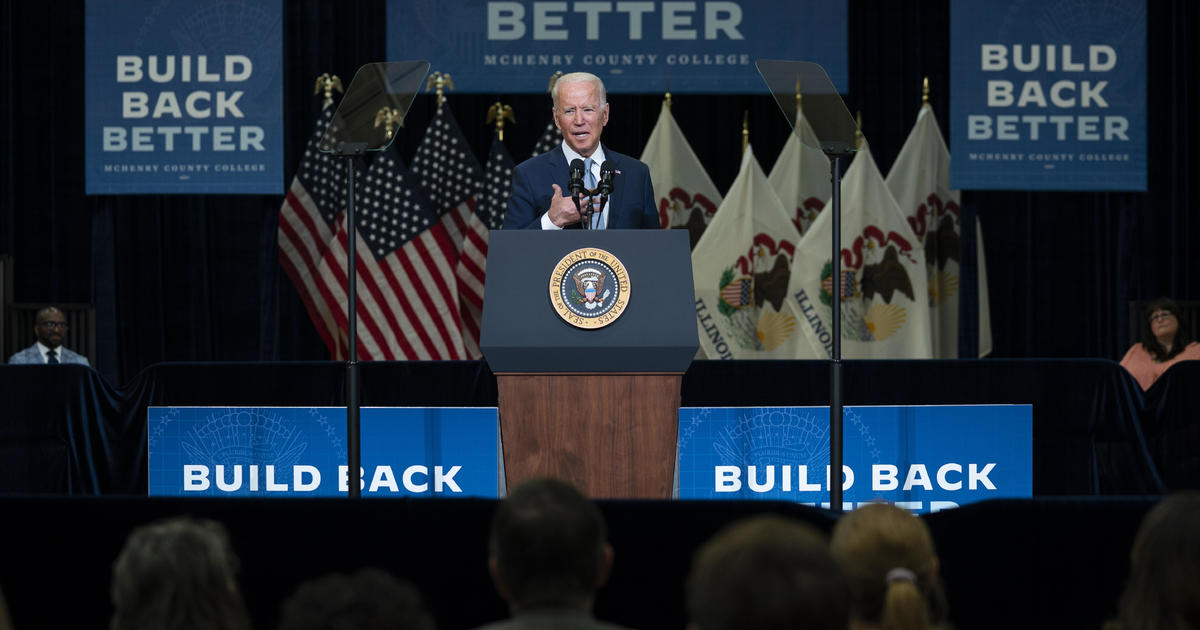 Washington — President Biden on Wednesday pushed his plans for education, child care and health care during a visit to a community college in Illinois as part of an effort to sell the American people on a sweeping proposal he said will help grow the U.S. economy and boost the nation’s competitiveness.

During his trip to Crystal Lake, Illinois, Mr. Biden highlighted the policies included in the larger plan that addresses so-called “human infrastructure,” which the White House wants to move through Congress while lawmakers also consider a narrow, bipartisan infrastructure deal the president reached with a group of senators last month.

“To truly win the 21st century and once again lead the world, to truly build an economy from the bottom up and the middle out, to truly deal everybody in this time, we need to invest in our people,” Mr. Biden said.

After arriving in Crystal Lake, the president first toured McHenry County College, which has workforce development programs and a child care center, and visited its children’s learning center and manufacturing lab. Then, he spotlighted in remarks his proposals for free community college, affordable child care and home care for the elderly and to extend child tax credit increases. The president also focused on plans to expand universal prekindergarten, provide 12 weeks of paid family and medical leave, and make permanent health insurance premium reductions.

“We need to lay the foundation for the next generation of American jobs and American leadership in manufacturing and technology,” Mr. Biden said.

Speaking about extreme weather that has plagued Illinois and other parts of the country, the president said “we can’t wait any longer to deal with climate crisis” and said the bipartisan infrastructure deal makes “major strides.”

“It’s time that we have to think bigger, we have to act bolder and we have to build back better,” he said, adding “this is going to be an American century.”

“As the president presses for the bipartisan infrastructure framework, he’s also pressing ahead on a dual track for the full breadth and scope of the Build Back Better agenda, which includes his critical climate priorities and the American Families Plan,” she said.

Senate committees have begun to write legislative text based on the $1 trillion bipartisan infrastructure framework agreed to by Mr. Biden and a group of senators, which the Senate is expected to move forward with this month.

The deal focuses on traditional infrastructure, such as roads, bridges and waterways, but left out Mr. Biden’s plans for so-called “human” infrastructure, like child care, health care and education. To address those priorities, congressional Democrats are moving ahead with a more sweeping bill, which will be passed using budget reconciliation. By taking up the measure through reconciliation, it can pass the Senate with a simple majority.

The price tag of the larger plan remains unclear. Senate Budget Committee Chairman Bernie Sanders of Vermont has suggested it could cost up to $6 trillion, but Democratic Senator Joe Manchin of West Virginia, whose vote in the upper chamber is key, has indicated he is unwilling to go higher than $2 trillion.

Mr. Biden has said he wants both bills to move through Congress together.