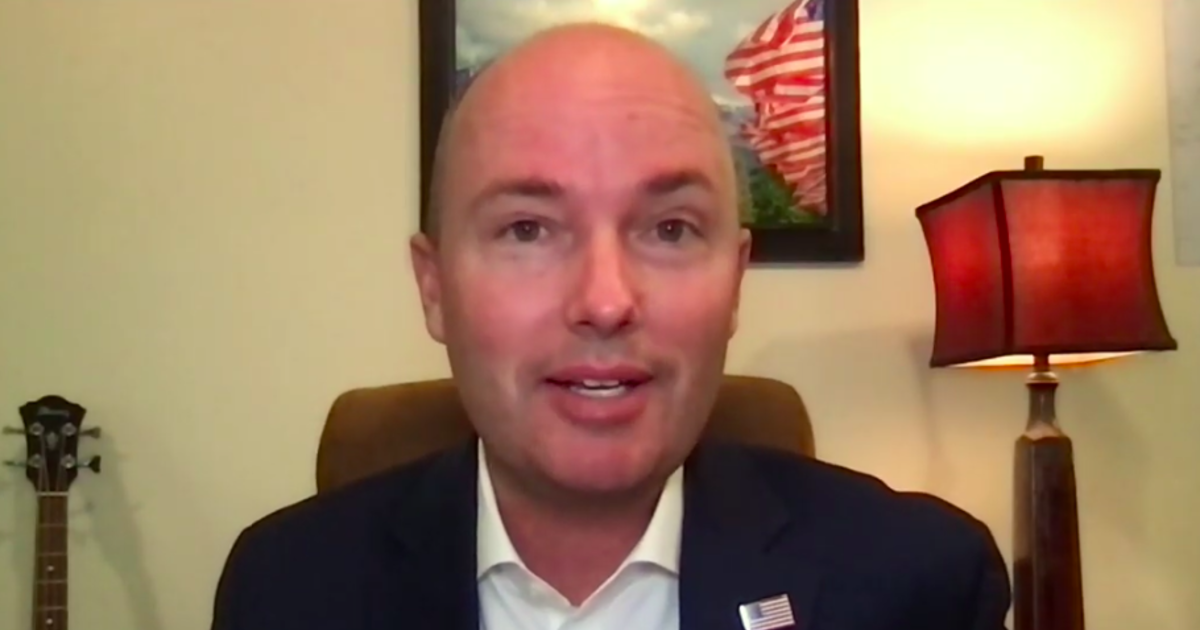 The following is a transcript of an interview with Utah Governor Spencer Cox that aired on Sunday, July 4, 2021, on “Face the Nation.”

ED O’KEEFE: We head west now to the Republican governor of Utah, Spencer Cox, whose state is one of four or the number of Delta variant COVID cases, has skyrocketed. Good morning, Governor. Part of why I wanted to chat with you this week is I know you have a unique situation in your state when it comes to infection rates and vaccinations. I want you to talk a little bit about that.

GOV. SPENCER COX: Sure. Well, we’re certainly seeing the Delta variant rise in our state, which is concerning. Hospitalizations are rising again. The good news is that- that our adult population is getting vaccinated at the same rate as the rest of the country. When you add in the- the federal partners, vaccinations were about 69% right now. But we are the youngest state in the nation. And so we have a very large population of young people who weren’t eligible to get vaccinated, those under the age of 12. And in every state, the younger you are, even amongst the eligible population, the less likely you are to be vaccinated. So we’re working hard to encourage our younger population to get vaccinated. We have 89% of those over the age of 65. So we feel really good about that. And our death rates have come down because of that. But we desperately need more.

ED O’KEEFE: And I know there have been reports of outbreaks among children in overnight camps. Utah has a lot of them. And I know you’re eager to get those children vaccinated, as are parents nationwide. How is your state prepared to do that once you get the go ahead to do it?

GOV. COX: Yeah, well, we- we have set up a very robust vaccination network. Our clinics are spread throughout the state. We’re- we’re also a very rural state. So that- that adds a component that’s difficult as well. But we have mobile vaccine clinics all over the state. It’s never been easier to get a vaccine. We’re working with school districts. We did that before for those over the age of 12, before school was let out to have vaccine clinics available at schools or close to schools, working with pediatricians and family practitioners, as well. So we’ll be ready once we get the go ahead. We’re just waiting for- for the FDA to make that decision.

ED O’KEEFE: And I know in several states across the country, they have set up essentially lotteries for people who end up getting a vaccine, and several people have won hefty sums of money for-for showing up after these lotteries began. But your state legislature, as I understand it, has blocked you from offering cash incentives to people for getting vaccinated. Are you being hamstrung by that? Would you like that option?

GOV. COX: Well, we’re certainly having those conversations with- with the legislature. They’re- they’re looking closely at what’s working in other states. I would like all options on the table, but I- I will say this, I think, you know, not-not dying is- is a great incentive. My colleague, Jim Justice, Governor Justice this morning said everybody’s playing a lottery of sorts. It’s if you’re not vaccinated, you’re playing a different kind of lottery. I think he called it the death lottery, something like that. But- but certainly we’re-we’re hopeful that that reason will rule and people will see how effective these vaccines are. Again, 95% of- of deaths since May have been amongst unvaccinated people in the state. So those are deaths that don’t have to happen, hospitalizations that don’t have to happen. It’s very simple and very easy to get the vaccine now.

ED O’KEEFE: We brought this up earlier with Jeff Zients, the White House COVID-19 coordinator. But there’s a new Washington Post poll out this morning that reinforces the unfortunate partisan divide on vaccinations. Overwhelming majorities of Democrats say they’ve been vaccinated, just 45% of Republicans. And 38% of Republicans say they’ll definitely not get the vaccine. What do you make of that?

GOV. COX: Well, it’s troubling, and I spoke about this often over the past, I mean, not even the past four years, but the past eight years, about how unfortunate it is that that politics is becoming religion in our country, that- that politics is becoming sport and entertainment in our country, that everything is- is political. It’s a huge mistake. And it’s caused us to make bad decisions during this pandemic and in other phases of our life as well. So- so it’s deeply troubling. We’re doing a little better amongst Republicans here in the state of Utah when it comes to vaccines versus those numbers that you just shared. And we’ll continue to work with- with everyone in our state to get them vaccinated.

ED O’KEEFE: I want to turn your attention, Governor, to the weather. There have been some incredible maps that have shown drought conditions in your state. You look at this map, for example, a year ago versus now. 100% of Utah is in drought. 98% of the state is in what can be classified as extreme drought. 65% in exceptional drought, the highest intensity. What is the best way to respond to something that’s going to be really difficult to reverse at this point?

GOV. COX: Sure, well, there- there are lots of different responses that- that are necessary. One, we have to conserve water better. We have to use less water. And that’s going to happen in lots of different ways. We have water restrictions across the state. I’m also a farmer. We’re- we’re down about 70% of our water consumption right now, and that will have economic and food stability impacts across our state. So- so we- just every person in our state has to use less water. We’ll do that through restrictions and technology advances as we move forward. That’s number one. Number two, and we talked about this with Western governors just this past week. We have to store more water. The people that settled these- these arid mountain valleys and Western states knew that. We’re not doing a great job of that anymore. I’m grateful in this bipartisan infrastructure push, there is money for that type of infrastructure. Storing water aboveground and underground as well will make a big difference. We are also the fastest-growing state in the nation, so we have to be prepared for generations to come.

ED O’KEEFE: I know this is personal for you. As you mentioned, you’re a 6th generation, I believe, alfalfa farmer.

GOV. COX: Well, we’re working very hard to help people understand the impacts of climate change. You may have noted recently. Representative John Curtis here from the state of Utah was helped to form a Republican climate caucus at the- at the federal level. So there’s more work being done there, but that’s a long term. And that’s as you mentioned earlier, that’s you know, that’s- that’s a 50-year solution.

GOV. COX: And so we have to do better there. And Utah is doing better. We’re cutting back on- on emissions here in the state of Utah, working with- with our governors across the West to implement. Kate Brown, who you’re going to have on, we’re working on electric car infrastructure across the West.

GOV. COX: So great things are happening there. But we also have to take the short-term impacts and take them very seriously, which President Biden did this week talking about wildfires in the West.

ED O’KEEFE: Yes. Governor Spencer Cox joining us from his home in Fairview, Utah. We appreciate it. Please come back. And when you’re here in D.C. especially, please come see us.