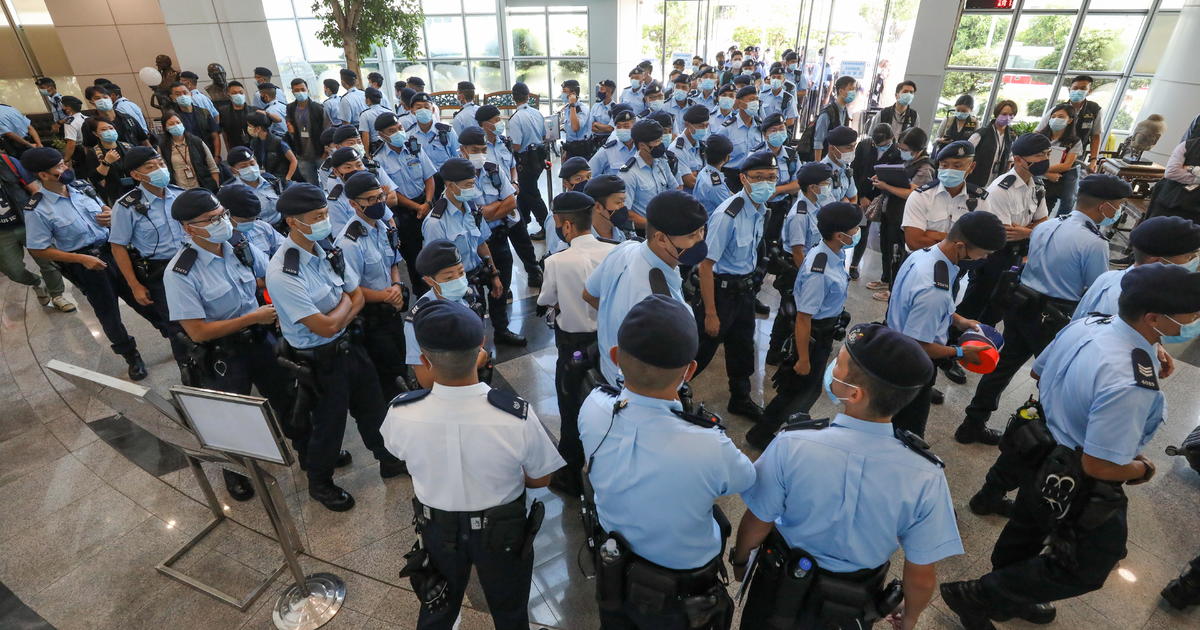 Hong Kong — Wednesday marked the first anniversary of China‘s central government imposing a controversial new National Security Law on the once-semiautonomous region of Hong Kong. Human rights group Amnesty International took the opportunity to warn that the once free-wheeling, international city was on the fast-track to devolving into a “police state” and “a human rights wasteland increasingly resembling mainland China.”

“From politics to culture, education to media, the law has infected every part of Hong Kong society and fomented a climate of fear that forces residents to think twice about what they say, what they tweet and how they live their lives,” said Yamini Mishra, Amnesty International’s Asia-Pacific Regional Director.

On June 30 one year ago, China’s National People’s Congress in Beijing rubber-stamped the controversial law in reaction to the popular pro-democracy, anti-China protests that rocked Hong Kong through much of 2019. It lists four categories of offenses as violations of China’s national security: The act of subversion, defined as attempting to undermine Hong Kong’s government; advocacy for secession, the separation of Hong Kong from the governance of China and committing an act of terrorism and colluding with foreign governments or forces.

In reality, the National Security Law also empowers Hong Kong’s authorities to arrest and prosecute anyone they deem to be criticizing government leaders, whether in Hong Kong, Beijing or China’s Communist Party at large.

Across this former British colony, the law has had a chilling effect on the words and actions of pro-democracy politicians, anti-China businesses, journalists and even the art world.

“It is a law which was foisted on us. We were not consulted. We think it’s very, very harsh,” she told CBS News. “It hasn’t got much clarity, and even if you talk to the lawyers, they are not sure. So that’s why people are so worried and so frightened.”

Some 500 police raided its newsroom and arrested five top editors and executives. The authorities say that about 30 articles published by Apple Daily violated the law with calls for foreign governments to sanction Chinese and Hong Kong officials. The paper’s billionaire founder, 72-year old Jimmy Lai, was arrested last August and has also been accused of collusion.

“Since long I stopped to be scared — because the Chinese Communists are very skillful in inducing fear to subdue you,” Lai told CBS News in 2019, when he was still a free man. When asked if he thought Beijing hated him, he replied, “yes,” without hesitation, and called it “a badge of honor.”

Lai could spend the rest of his life in prison. Apple Daily shut down last week after 26 years in operation. Many fear that smaller pro-democracy digital news organizations, like the Chinese-language Stand News, could be next.

“We are pro-democratic,” said Ronson Chan, deputy assignment editor of Stand and the chairman of the Hong Kong Journalists Association. “There is no room to retreat in reporting.”

Chan told CBS News there had been “no precise message” from the Hong Kong government suggesting other outlets could be targeted, but he said everyone was expecting, and bracing for it.

One thing Stand News can control, however, is access to its past reporting that might be deemed to violate the National Security Law.

“Not deleted. Just not open to the public,” said Chan of content that has been hidden online. He said the intention was simple – to protect the outlet’s journalists.

“The National Security Law is similar to what’s going on when the Nazis took power,” said Kacey Wong, a popular anti-China performance artist. He said the law was also like art, because “it’s open for interpretation.”

The vague legislation, in other words, leaves it up to police and judges to decide whether someone has crossed the line.

“But in Hong Kong right now, the red line, or the red zone, is not clear,” said Wong. “You don’t know if you step into the red zone or not!”

He’s one of many Hong Kongers who say Beijing is targeting, hollowing out and replacing the long-established systems and norms for elections, education and free expression in the former British colony.

“It’s kind of like Hong Kong became a Chinese colony,” he said with a laugh, “or (the) Chinese Communist Party’s colony.”

But he knows it’s no laughing matter.

“Hong Kong right now is more dangerous than Beijing,” he said, “because in Beijing what can be talked about [and] what cannot be talked about is very clearly understood.”

“I will never step down from the fight for human rights and democracy,” said Emily Lau. “But it must be in a peaceful and nonviolent way. You say this is bad now? It’s going to get worse? Possibly. But then the fight goes on. The game is not over.”