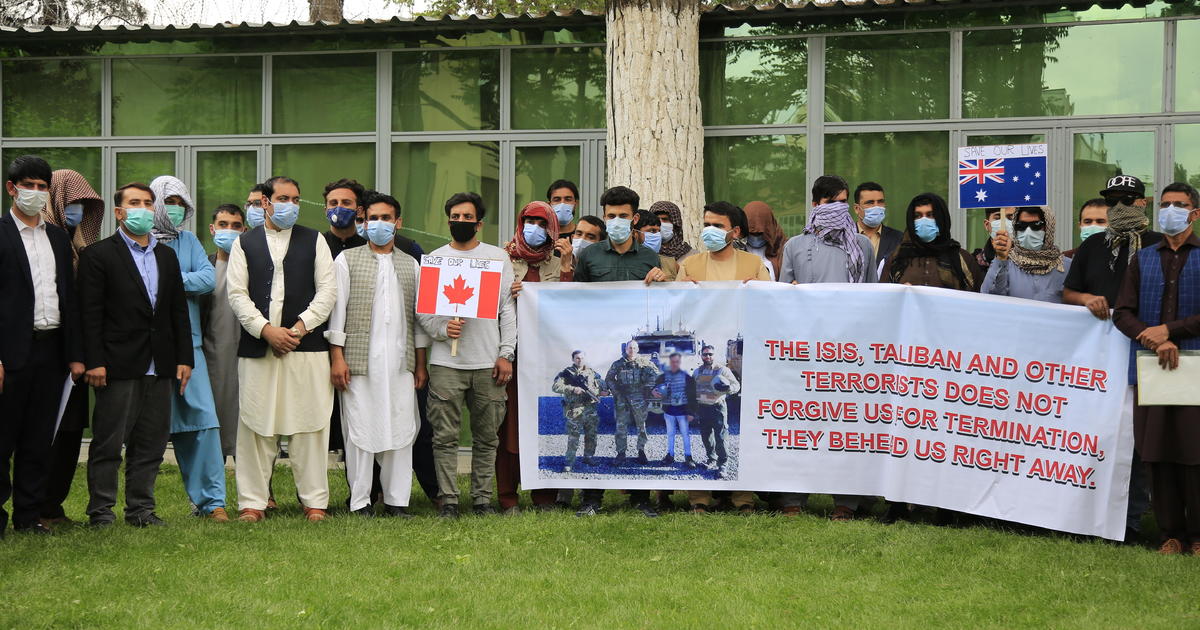 Washington — In an effort to help Afghans fearing the Taliban’s revenge for their work with American troops, the House is scheduled to vote on a bill Tuesday that aims to speed up the bureaucratic process of gaining a special immigration visa to come to the United States.

About 18,000 Afghans who worked with U.S. troops as interpreters, translators or in other positions are eligible for a special immigrant visa to leave the country for their safety. This number does not account for the family members who would also be included.

The HOPE For Afghan SIVS Act, introduced by Representative Jason Crow of Colorado, aims to clear some hurdles that extend the SIV process including clearing a medical examination requirement.

The 14-step process can take years to complete, and only 9,000 applicants have begun the application so far.

Other introduced legislation aims to increase the number of authorized visas and remove the requirement for “a credible sworn statement” needed to prove the threat faced by the applicant.

Sayed* is one of thousands of Afghans waiting in Kabul for his special immigration visa application to process.  For eight months, he has not stepped outside his home, for fear of being killed by the Taliban because of his work as an interpreter for American troops.

He helped the U.S. for four years, now Sayed needs the U.S. to help him.

“I cannot even go out of my home, I can do nothing,” Sayed told CBS News.

The U.S. withdrawal means that his job as an interpreter is no longer necessary, but going out anywhere to find work is impossible with the Taliban everywhere.

His brother Ahmad* was also an interpreter for U.S. troops, but fled to the U.S. under the SIV program in 2014 after he was targeted by the Taliban.  He now fears for his brother’s life.

“In the past the Taliban have not forgiven anybody they have captured affiliated with U.S. forces,” said Ahmad. “They do not reason. The kill on the spot.”

The White House announced last week that it plans to evacuate the eligible Afghans to a yet-to-be-named third country.

The need for evacuations has become more urgent as a full American withdrawal is coming before the initial September 11 deadline and as the Taliban retakes increasingly more districts.

Recent reports estimate that the Afghanistan government could collapse as early as six months after American troops withdraw.

This comes as the significant backlog of SIV applicants was hit by another curve ball as the U.S. Embassy in Kabul closed, suspending visa processing, due to a COVID-19 outbreak.

When asked last week about plans to evacuate the Afghan allies to other countries, President Biden promised, “They’re going to come. We’ve already begun the process. Those who helped us are not going to be left behind.”

As the countdown to withdrawal closes in, many questions on the logistics of the evacuation remain unanswered, such as which country will the Afghan allies be sent to or when evacuations will start. And how they will be taken out of the country.

At a House Armed Services Committee hearing last week, the chairman of the Joint Chiefs General Mark Milley said, “We have the military capability to do whatever is directed by the President of the United States with respect to our allies and those who have worked with us. And I consider it a moral imperative to take care of those that have served along our side.”

Guam is being considered as a potential contender for evacuation. The American territory has been used before by the U.S. both to evacuate Vietnamese refugees in 1975 and Iraqi Kurds in 1996.

“Frankly, I care far less about exactly how it happens and much more about the fact that it just does happen.  We have put forward the Guam option because it’s a tried and true place to handle evacuees,” said Representative Seth Moulton of Massachusetts, a former Marine, during a presser calling for an evacuation plan.

Sayed’s application is currently stuck in a bureaucratic quagmire. One of the 14 steps in the SIV process requires a letter of recommendation, Ahmad said his brother received the letter from a colonel he worked with, but for the past 5 months he has been waiting for the colonel to verify it.

“Even if he is super busy, taking five minutes to reply to an email from the embassy can save a life. No one is that busy,” said Ahmad.

Ahmad said he reached out to the colonel personally to emphasize that his brother would not ask him for help or “create any inconvenience” for him.

“I am a U.S. citizen. I am a law student. I have a successful life here in the U.S. I have saved enough to be able to support my brother,” said Ahmad.

For now, all the brothers can do is wait.

“Afghans who chose to work for the U.S. government, they chose to do so despite knowing that their lives will change forever,” said Ahmad.

*Names have been changed due to safety concerns.