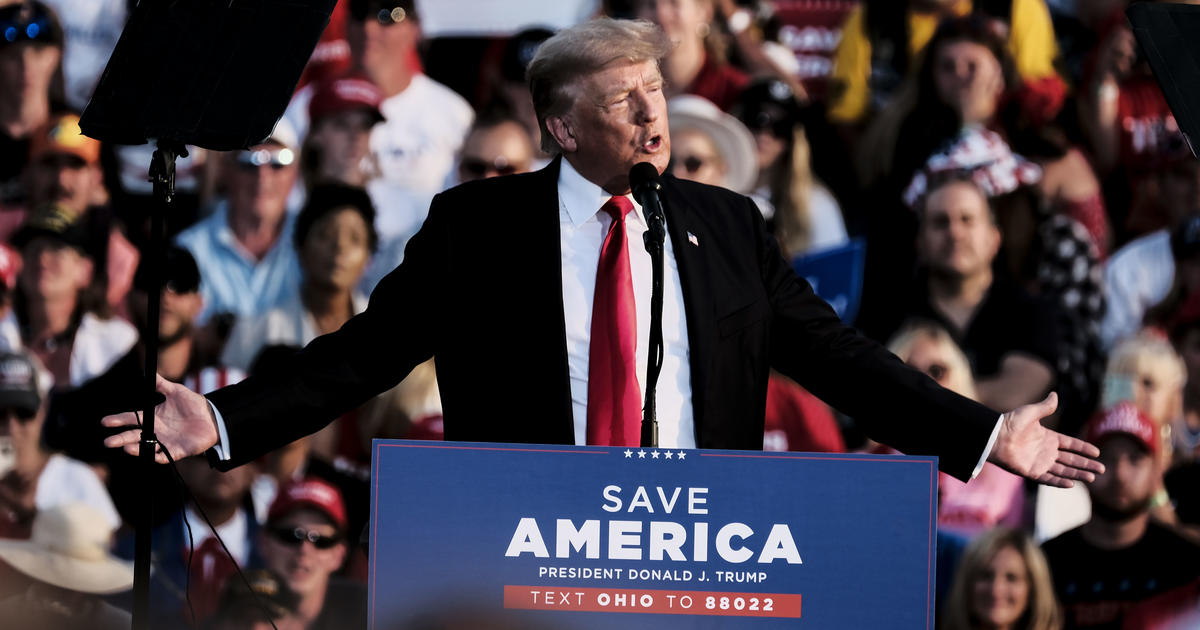 Former President Trump returned to the rally circuit on Saturday night. His trip to Ohio was billed as a chance to exact some revenge against one of the House Republicans who voted to impeach Mr. Trump, but the former president’s speech largely focused on his complaints about the Biden administration and repeating false claims about the 2020 election.

The event marked the former president’s first rally since leaving office. Mr. Trump has made just a few public appearances during his post-presidency, including speeches at the Conservative Political Action Conference in Florida and the North Carolina GOP’s state convention. The rally on Saturday night marked the start of a more public phase of his life after the White House and he declared the event the “first rally of the 2022 election.”

During his speech, Mr. trump sharply criticized the first few months of President Biden’s administration, including Mr. Biden’s record on immigration, foreign policy and economic issues. But as the former president ticked through attacks against his successor while highlighting his own accomplishments in the White House, he repeatedly weaved in his grievances about the 2020 election.

Mr. Trump and his allies lost more than 60 court cases challenging the results of the election, and his own attorney general said there was no evidence of fraud at a level that “could have effected a different outcome in the election.” A joint statement from the U.S. Cybersecurity and Infrastructure Security Agency and other federal and state election officials declared that the 2020 election was the “most secure election in American history.” Official audits in multiple states upheld the election results as well.

Earlier this week, a Republican-led state Senate committee in Michigan affirmed that there was “no evidence of widespread or systematic fraud in Michigan’s prosecution of the 2020 election.” The former president criticized Michigan GOP lawmakers, complaining that they aren’t doing enough to uncover election issues. Mr. Trump also praised Republicans in the Arizona Senate for their controversial audit of Maricopa County’s election, which finished on Friday.

The former president’s repeated falsehoods about the 2020 election have penetrated the Republican Party. A Monmouth University poll released June 21 found that 57% of Republicans still believe that President Biden won the election due to voter fraud. Of the Republicans who believe, falsely, that Mr. Biden won due to fraud, 31% said they will never accept him as president.

Despite there being no evidence of widespread fraud in the 2020 election, several Republican-led state legislatures have seized on the party’s distrust of the electoral process to amend their voting laws. On Friday, Attorney General Merrick Garland announced that the Justice Department is suing Georgia over the state’s sweeping election bill that was passed in March. In his speech, Mr. Trump called for other states to pass laws that strengthen voter ID requirements and provide more protection for poll watchers.

Mr. Trump also strongly criticized the Biden administration over its immigration policies. The former president is going to the southern border next week and joked that his planned trip convinced Vice President Harris to visit the border on Friday.

Mr. Trump went to northeast Ohio with his eyes set on revenge against Congressman Anthony Gonzalez, one of the House Republicans who voted to impeach the former president following the January 6 attack on the U.S. Capitol. Mr. Trump claimed Gonzales used to ask for rides on Air Force One, “and the next time I heard his name, he was impeaching me.”

“He’s a sellout, he’s a fake Republican and a disgrace to your state,” Mr. Trump said. “He’s not the candidate you want representing the Republican Party.”

Former Trump aide Max Miller is running against Gonzalez in next year’s GOP primary. Mr. Trump won Ohio by 8 points in 2020 and won Gonzalez’s district by 14 points, although it’s not clear how the district will look after the boundaries are drawn in redistricting.

Trump said Miller was a “trusted aide” and quipped that while he had “great people working for me, we had some real losers too.” Miller, in remarks before Mr. Trump spoke, said Gonzalez’s vote for impeachment “is a betrayal he can never turn back from.” Gonzalez has stood by his impeachment vote.

The former president also called out some of his enemies within the Republican Party, including Congresswoman Liz Cheney who was ousted from her House leadership position in May because of her frequent criticism of Mr. Trump. Before the Rally, Cheney encouraged her followers on Twitter to donate to Gonzalez.

The rally also featured appearance’s by some of Mr. Trump’s most loyal defenders, including Congresswoman Marjorie Taylor Greene of Georgia, who told the crowd, “President Trump is my president too,” and Congressman Jim Jordan of Ohio, who said he wants to see Mr. Trump run for president again in 2024.

Mr. Trump has continued to hold significant influence over the GOP since leaving office. Republicans have held fundraisers at his properties and top GOP leaders have traveled to meet with him. A CBS News poll in May found that 66% of Republicans believe it is important for Republicans to be loyal to Mr. Trump.

Mr. Trump is scheduled to hold another rally on July 3 in Sarasota, Florida.