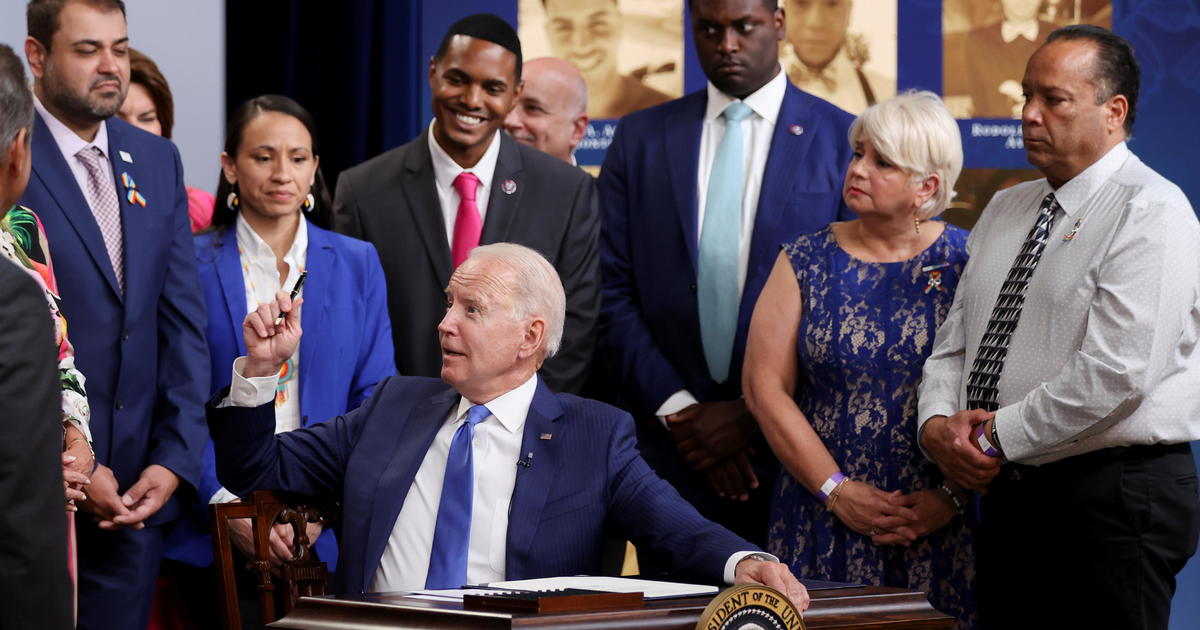 President Joe Biden declared “pride is back at the White House,” delivering remarks in a day of events intended to mark the contributions of LGBTQ Americans. He spoke after signing H.R. 49, which designates the site of the 2016 Pulse Nightclub shooting as the “National Pulse Memorial.”

But Mr. Biden recognized that much work remains to be done to give equal rights and protections to LGBTQ Americans. The president said Harvey Milk was right when he said it “takes no compromise to give people their rights.” He specifically called on the Senate to pass the Equality Act.

“When a same-sex couple can be married in the morning but denied a lease in the afternoon for being gay, something’s still wrong,” Mr. Biden said. Over half of our states, in over half of our states, LBGTQ+ Americans still lack explicit state-level civil rights protections to shield them from discrimination. As I said as a presidential candidate and in my first joint address to Congress, it’s time for the United States Senate to pass the Equality Act and put the legislation on my desk. On my desk.”

The Equality Act would enshrine legal protections for LGBTQ Americans into law, and condemn the recent spate of discriminatory bills under consideration or passed in multiple state legislatures. In the 2021 legislative session alone, 23 states have considered more than 50 bills targeting transgender youth, according to a list maintained by the National Center for Transgender Equality.

Transportation Secretary Pete Buttigieg, the first openly gay member of a president’s cabinet, spoke before the president was introduced, and both the secretary and Mr. Biden gave a shout-out to Buttigieg’s husband, Chasten.

“Us even being here proves how much change is possible in America,” Buttigieg said from the podium.

The president was introduced by 16-year-old transgender advocate Ashton Mota of Massachusetts. Mota transitioned shortly before the seventh grade, and now advocates for other transgender youths.

“It’s simple. When children are loved, we thrive,” he said.

Mr. Biden joked to the 16-year-old that he looked quite at ease on stage at the White House.

“You seemed awfully comfortable up here,” Mr. Biden said. “I don’t know, I’m not sure I’ll be around, but if you’re here, just don’t pretend you don’t know me, OK?”

Ahead of his remarks, the president took a moment to honor the victims of the Pulse Nightclub shooting, saying he hopes no other president will ever have to sign a memorial bill like that one.

“We’ll never fully recover, but, we remember,” Mr. Biden, accompanied by survivors of the devastating 2016 shooting.

In the president’s company Friday afternoon were members of the Congressional Equality Congress, including Senator Tammy Baldwin and Congressman David Cicilline; one of the highest-ranking openly trans service members, Lt. Col. Bree Fram; and state legislators.

Mr. Biden will also announce his appointment of Jessica Stern, the executive director of OutRight Action International, as the U.S. Special Envoy to Advance the Human Rights of LGBTQI+ Persons at the State Department.

Before signing the bill earlier, the president also commented on the partial collapse of a condo building in Surfside, Florida, which has left dozens missing. He said he’s spoken to Florida Governor Ron DeSantis, and said there’s “nothing worse” than for friends and family members to have to wait and wonder what happened. Mr. Biden also said the administration is doing everything possible to assist the victims and the community.

Mr. Biden has repeatedly urged the Senate to pass the Equality Act. Twenty-nine states do not have laws that explicitly shield LGBTQ Americans from discrimination, resulting in a patchwork of protections that vary from state to state. The Equality Act would extend protections to cover federally funded programs, employment, housing, loan applications, education and public accommodations. However, it’s still uncertain whether the bill will be able to garner support from a sufficient number of Republicans to pass.

Mr. Biden’s remarks also come after the Department of Education announced earlier this month that transgender students are now protected under Title IX. The federal civil rights law, passed in 1972, protects people from discrimination based on sex, and now, gender identity and sexual orientation, in any educational setting that receives federal aid.

The Biden administration also announced in May that it would will protect gay and transgender people against sex discrimination in health care, reversing a Trump-era policy.

Li Cohen contributed to this report.